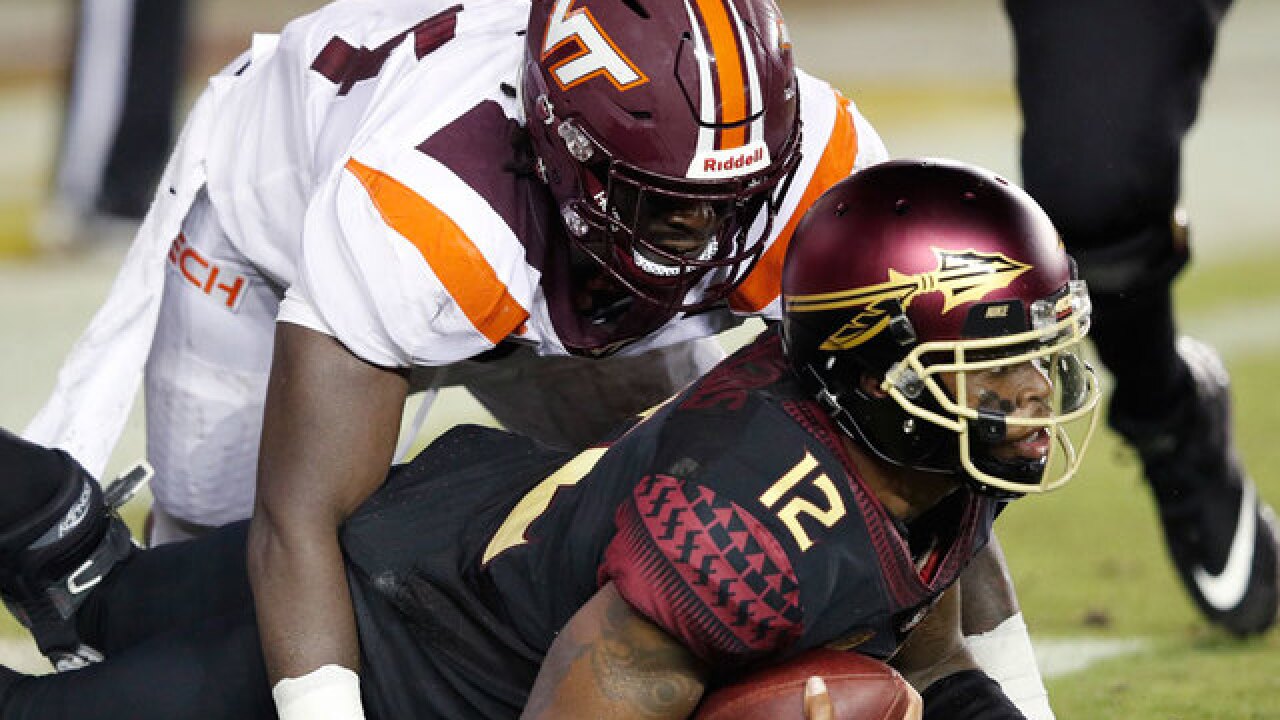 Image copyright 2018 Getty Images. All rights reserved. This material may not be published, broadcast, rewritten, or redistributed.
&lt;p&gt;Deondre Francois #12 of the Florida State Seminoles reacts after being sacked by Trevon Hill #94 of the Virginia Tech Hokies in the second quarter of the game at Doak Campbell Stadium on September 3, 2018 in Tallahassee, Florida. (Photo by Joe Robbins/Getty Images)&lt;/p&gt;

Florida State and Willie Taggart delivered the program's most inept offensive performance at home in a decade, hardly the start Taggart had hoped for with the Seminoles.

Needless to say, it was easy to tell which Atlantic Coast Conference heavyweight looked like a title contender Monday night.

Josh Jackson threw two touchdown passes, one early and another late, and the 20th-ranked Hokies handled No. 19 Florida State 24-3 in the rain to spoil Taggart's debut in Tallahassee.

"It certainly wasn't perfect by any means, but to play as intelligent as we did, I am proud," said Fuente, who beat then-No. 22 West Virginia to open 2017.

Florida State looked dysfunctional and disorganized most of the night, finishing with five turnovers, a blocked punt that was returned for a touchdown and a missed field goal. It was the first time the Seminoles failed to score a touchdown at home since losing 12-3 to Wake Forest on Sept. 20, 2008.

"Tough loss," said Taggart, a former head coach at Oregon, South Florida and Western Kentucky. "Not what any of us expected. We didn't play a good game at all. It was very sloppy. It's hard to win a football game with five turnovers.

"We have to play much better. That's on all of us, starting with me."

The Hokies were good at the start and even better with the game on the line.

Jackson connected with Eric Kumah over the middle with less than 6 minutes to play. Kumah bounded through three arm tackles and raced 49 yards for the game-sealing score. Jackson also opened the game with a 10-yard touchdown pass to Damon Hazelton in the corner of the end zone. Jackson lofted a pass that cornerback Levonta Taylor looked lost trying to defend.

Jackson completed 16 of 26 passes for 207 yards. Kumah finished with four catches for 86 yards.

Kumah also scored on special teams, scooping up the team's 75th blocked punt since 1987. It was fitting since former Virginia Tech coach Frank Beamer, known for his "Beamerball" brand of special teams, was on hand as an honorary captain.

The outcome probably shouldn't have been too surprising since the Hokies finished 9-4 in Justin Fuente's second season and returned a number of key players, including Jackson. The Seminoles are coming off a 7-6 season and are still getting acclimated to a new coaching staff and new schemes on both sides of the ball.

"I saw a lot of guys ticked off in the locker room, a lot of guys crying," Taggart said. "We'll see how guys come back and respond. ... You have to do it quick."

The Seminoles essentially provided huge assists on both of Tech's touchdowns and cost themselves another 10 points.

"We didn't do a whole lot of adjusting," longtime Hokies defensive coordinator Bud Foster said. "We fit up the speed reads and created negative plays."

Virginia Tech had a chance to make it a three-score game late in the third quarter, but Fuente went for it on fourth down at the 1. Steven Peoples was stopped short of the goal line, keeping it a 14-point game and giving the Seminoles life.

FSU looked like it might cut the lead in half after Cam Akers broke loose for an 84-yard gain midway through the fourth, but Akers and fellow running back Amir Rasul botched a handoff in the backfield and wasted the scoring opportunity.

Virginia Tech: It wasn't pretty for the Hokies, but some of the struggles were expected considering they opened the season on the road against a ranked opponent. Jackson played mistake-free football, which is always a good start.

Florida State: The Seminoles were downright dismal on offense. Francois, returning from a knee injury that cost him most of last season, completed 22 of 35 passes for 233 yards behind a shaky offensive line. He threw three interceptions, was sacked five times and pressured even more often.

Retired coaches Beamer (Virginia Tech) and Bobby Bowden (Florida State) served as honorary captains for the first meeting between the two schools since 2012. The Hokies and Seminoles last played in Tallahassee in 2008.

Two-time All-American receiver Peter Warrick had his No. 9 jersey retired at halftime. It was the 11th number retired in program history.