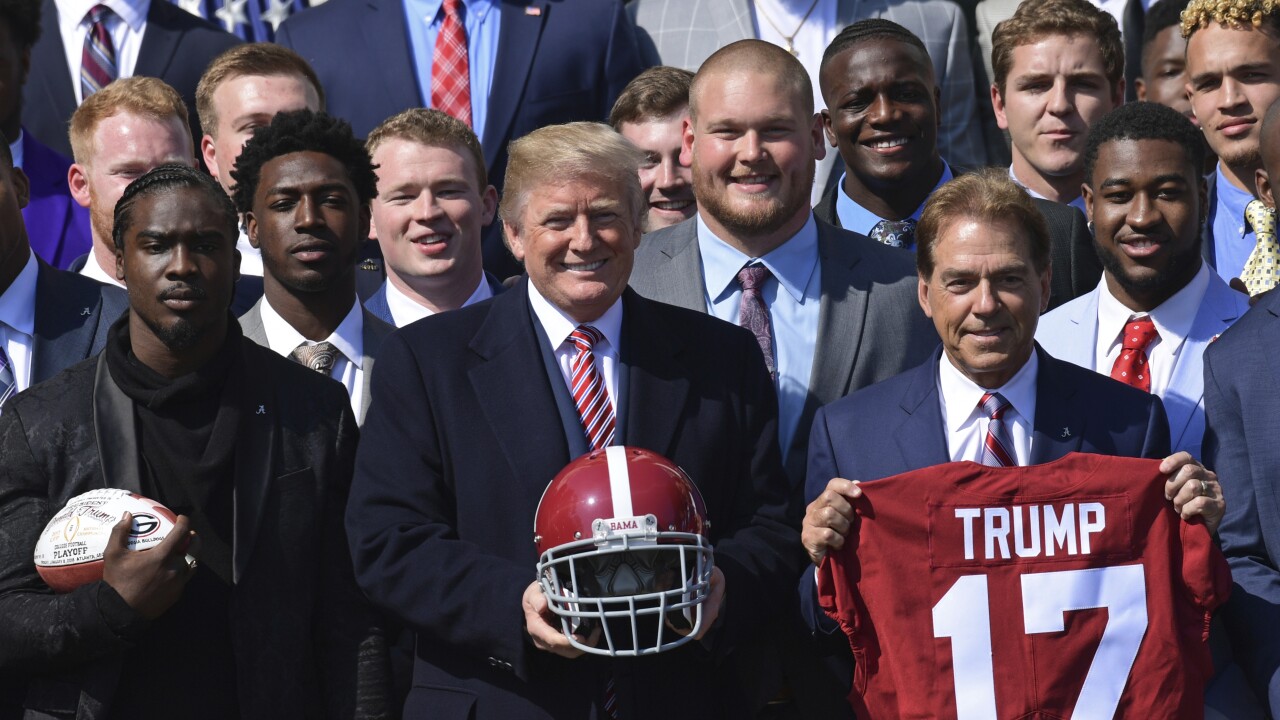 (Copyright 2020 The Associated Press. All rights reserved. This material may not be published, broadcast, rewritten or redistributed.)
Susan Walsh/AP
President Donald Trump poses for a photo with the 2017 national champion University of Alabama football team at the White House in Washington, Tuesday, April 10, 2018. Alabama head coach Nick Saban holds the Trump jersey at right.

Trump was speaking with reporters Monday night, on the eve of Alabama's runoff for the Republican U.S. Senate nomination, in support of former Auburn coach Tommy Tuberville, pointing out Tuberville's success against the rival Crimson Tide, when he mistakenly mentioned Lou Saban in jest.

"Really successful coach," Trump said, speaking of Tuberville. "Beat Alabama, like six in a row, but we won't even mention that. As he said … because of that, maybe we got 'em Lou Saban. ... And he's great, Lou Saban. What a great job he's done."

The thing is, though, Nick Saban -- not Lou Saban -- is at the helm of Auburn's hated in-state rival.

Lou Saban, who died in 2009, was a longtime college football coach at programs like Northwestern, Maryland and Miami, where he led the Hurricanes to a 9-13 record in two seasons during the late 1970s. But he never coached at Alabama.

Needless to say, he was far less successful than Nick Saban, who might just be the great coach in major college football history.

Although Nick and Lou are not related, they do share a tie to South Florida.

Before he won five national championships and amassed 157 wins (and counting) at Alabama, Nick Saban spent two seasons coaching the Miami Dolphins. Like Lou Saban before him, Nick Saban's tenure in Miami was brief, compiling a less-than-impressive 15-17 record in two seasons.

Trump was right about Tuberville's winning streak, however. The coach-turned-politician won six straight "Iron Bowl" games between 2002-07, including a 17-10 victory in Nick Saban's debut season at Alabama. Take that, Saban. Nick, not Lou.