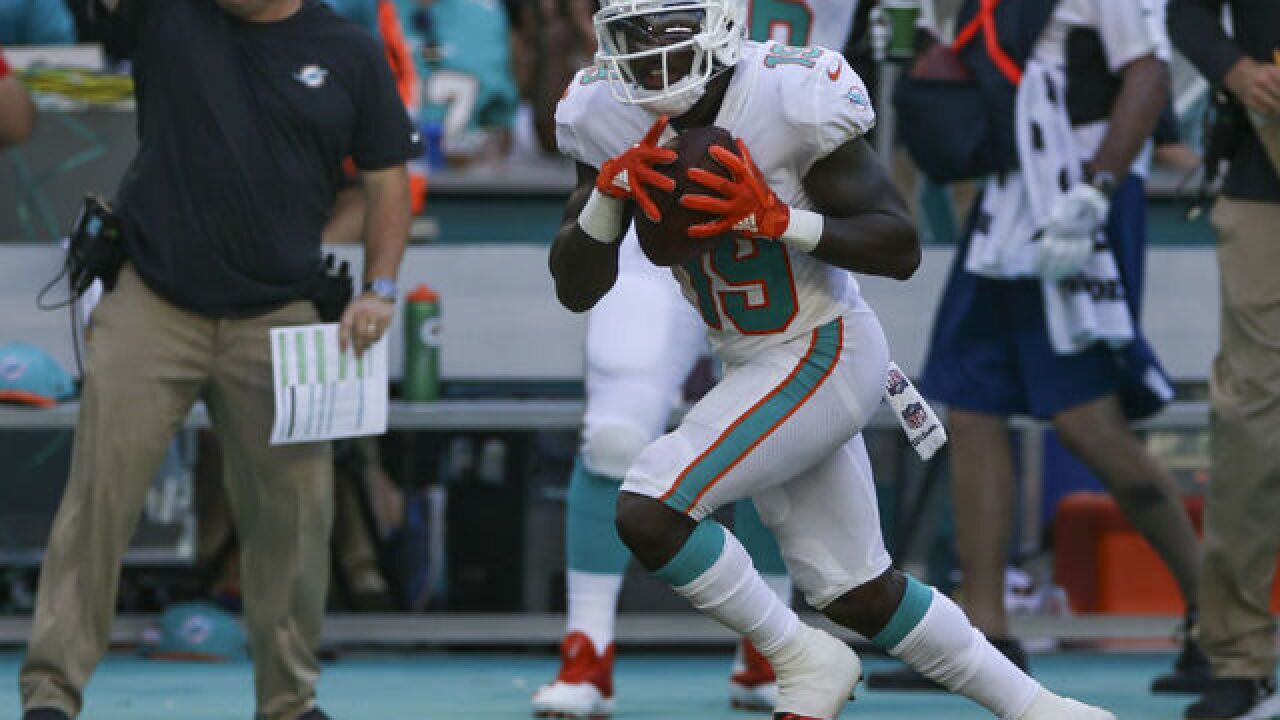 Image copyright 2018 Getty Images. All rights reserved. This material may not be published, broadcast, rewritten, or redistributed.
&lt;p&gt;Jakeem Grant #19 of the Miami Dolphins scores a touchdown during the third quarter against the Oakland Raiders at Hard Rock Stadium on September 23, 2018 in Miami, Florida. (Photo by Marc Serota/Getty Images)&lt;/p&gt;

MIAMI GARDENS, Fla. (AP) — Receiver Albert Wilson threw a 52-yard touchdown pass to put the Miami Dolphins ahead midway through the fourth quarter, and then turned a short reception into a 74-yard score that sealed a 28-20 victory over the Oakland Raiders on Sunday.

Miami coach Adam Gase used creative play-calling to overcome a wave of injuries and penalties, and a 17-minute deficit in time of possession. The Dolphins scored on a pair of shovel passes by Ryan Tannehill that each traveled less than a yard — one on the flip to Wilson, and an earlier similar pass that Jakeem Grant caught before turning the corner for an 18-yard score.

Oakland outgained the Dolphins, and Derek Carr threw for 345 yards. But Xavien Howard intercepted him twice deep in Miami territory, and the Dolphins mounted a first-half goal line stand to stay in the game.

Trickery gave the Dolphins their first lead in the fourth quarter. Tannehill handed off to Frank Gore, who tossed the ball to Wilson on an end-around. Wilson — a quarterback in high school — then lobbed the first pass of his career to a wide-open Grant, who outmaneuvered two Raiders to the end zone.

Following Howard’s second interception, Wilson scooted around the end after taking Tannehill’s short pitch and scored the clincher. Wilson and Grant ran side by side in the clear for the final 30 yards and exchanged a gleeful high five approaching the end zone.

The Raiders’ Jordy Nelson had 139 yards receiving in the first seven minutes, and finished with 173 on six catches.

Tannehill went 17 for 23 for 289 yards and three scores with no turnovers.

Miami’s Kenny Stills took a big hit when he made a 34-yard touchdown reception in stride in the back of the end zone and slammed into the cushioned retaining wall.

Miami missed injured safety Reshad Jones at the start, with rookie replacement Minkah Fitzpatrick burned on the second play when Nelson turned a short pass over the middle into a 61-yard gain. That set up Nelson’s 12-yard touchdown catch, again over the middle.