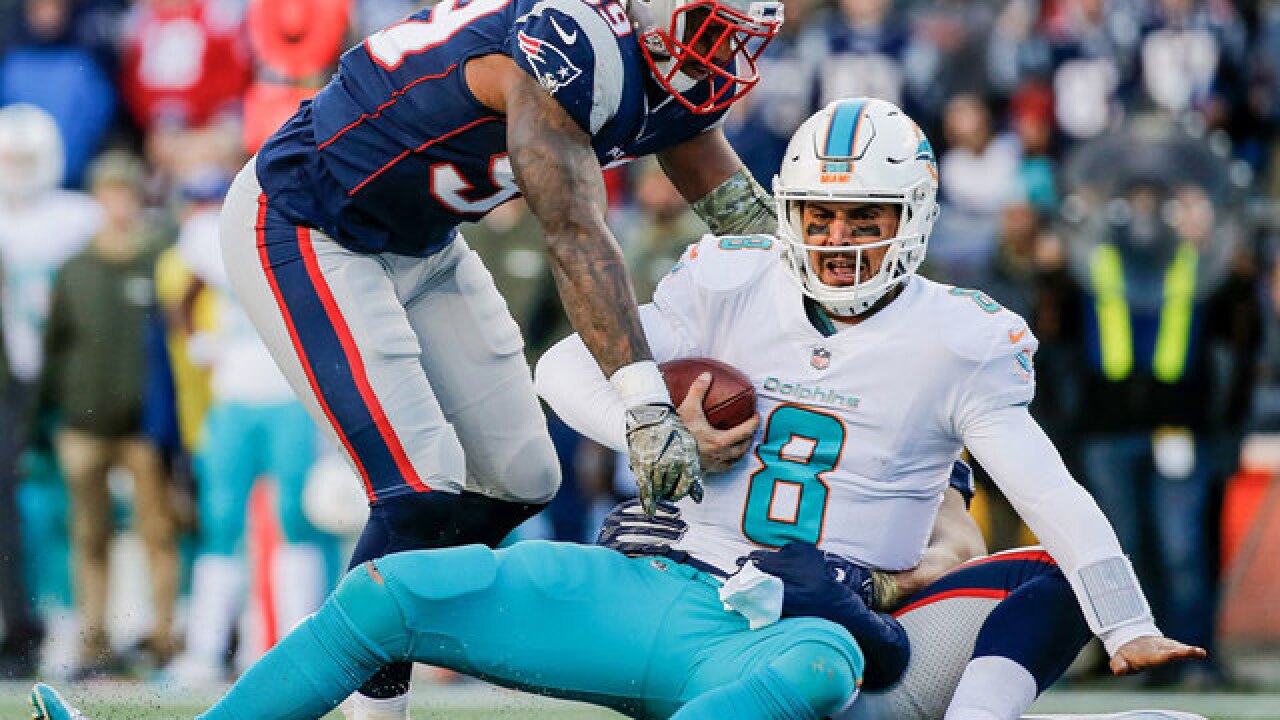 Image copyright 2017 Getty Images. All rights reserved. This material may not be published, broadcast, rewritten, or redistributed.
&lt;p&gt;Trey Flowers #98 and Marquis Flowers #59 of the New England Patriots tackle Matt Moore #8 of the Miami Dolphins during the third quarter of a game at Gillette Stadium on November 26, 2017 in Foxboro, Massachusetts. (Photo by Jim Rogash/Getty Images)&lt;br /&gt; &lt;/p&gt;

FOXBOROUGH, Mass. (AP) — Rob Gronkowski was upset that he didn't get to sample any of the biscuits Tom Brady made for Thanksgiving.

They worked it out on Sunday.

Brady tossed four TD passes — including two to Gronkowski — and the New England Patriots pushed through injuries and a mistake-filled game for a 35-17 victory over the sliding Miami Dolphins.

"Anything (Gronkowski) wants I try to get for him," Brady said. "So anything to keep him happy."

New England (9-2) posted its seventh consecutive victory and third straight win over Miami. The Dolphins (4-7) have lost five straight for their longest slide since 2011.

It was Brady's 28th career game with four or more touchdown passes — ranking third all-time. His 26 touchdowns passes are the most ever in a season after turning 40 years old.

Rex Burkhead also scored two TDs and Dion Lewis had 15 carries for 112 yards for New England, marking his first career 100-yard game. The Patriots went 5 for 5 in the red zone.

"We know our biggest games are ahead of us," Brady said. "All the good teams are gonna start playing really well. We've gotta be one of those teams."

Miami got within 28-17 in the fourth quarter, but came up empty on a fourth-down pass play with 8:48 left. On the ensuing series, the Patriots scored on a 5-yard touchdown pass from Brady to Brandin Cooks.

The Dolphins played without quarterback Jay Cutler, who practiced Friday, but remained in the concussion protocol.

Matt Moore struggled to find a rhythm in his second start of the season. He completed 23 of 34 passes for 215 yards and a touchdown, but also had two interceptions. He was sacked seven times.

Despite the losing streak, Moore said the locker room is staying together.

Running back Damien Williams was carted off the field in the third quarter with a shoulder injury following an 11-yard run. Return man Senorise Perry was placed in the concussion protocol after what appeared to be a helmet-to-helmet collision with New England's Trevor Reilly on a second-half kickoff return.

The Patriots got tricky to set up their first score, using a fourth-down run by Nate Ebner on a fake punt to keep their opening drive alive. Burkhead finished it with a 2-yard touchdown run.

Following a quick three-and-out by Miami, New England made it 14-0 via a 5-yard touchdown pass from Brady to Gronkowski.

Patriots center Ted Karras sent a second-down shotgun snap flying past Brady , who was not ready for the ball. It was scooped up by Dolphins safety Reshad Jones and returned for a touchdown.

Karras was filling in for David Andrews, who sat out for the second straight week with an illness.

But New England bounced right back. A pair of defensive holding penalties, a 27-yard pass from Brady to Cooks and a 22-yard run by Burkhead helped the Patriots drive to the Dolphins 1. Two plays later, Brady hit Burkhead for a 1-yard score to push the lead to 21-7.

McCain and Amendola got into it at the bottom of the pile early in the second half. McCain, who intercepted Brady in the second quarter, was called for unnecessary roughness and thrown out for throwing the punch. He had a few words for the referee as he left the field, and then was walked off toward the Dolphins locker room.

The penalty put the Patriots at the Miami 12. Two plays later, Brady found Gronkowski for a 15-yard TD and a 28-10 lead.

It was the 16th multi-touchdown game by Gronkowski, setting a franchise record. Randy Moss held the old record with 15.

Dolphins: DE Terrence Fede was helped off the field after being injured in the scrum during Jones' fumble recovery touchdown run.

Patriots: Ebner left with a knee injury after his fake punt run in the first quarter. ... Reilly left with a head injury after the collision with Perry. ... DL Trey Flowers (ribs) and LB Marquis Flowers left in the third quarter after a collision. ... OL LaAdrian Waddle left in the fourth quarter with an ankle injury. ... LB Kyle Van Noy (leg) was able to walk off the field on his own after he was shaken up in the fourth.

Dolphins: Return home to host the Broncos next Sunday.