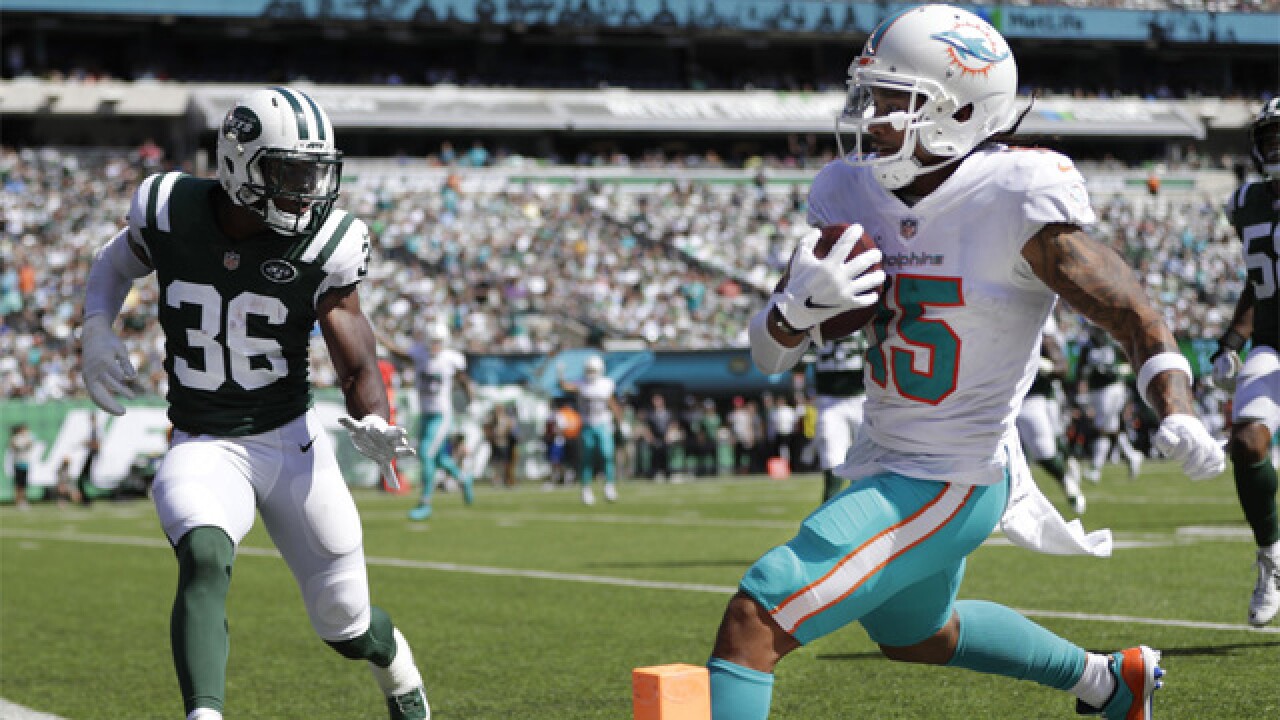 T.J. McDonald and Xavien Howard each intercepted the Jets' rookie quarterback, helping the Dolphins to their first 2-0 start to a season since 2013.

Tannehill finished 17 of 23 for 168 yards and also ran for 44 yards on eight carries for the Dolphins, coming off a win in the longest NFL game since 1970 merger by outlasting Tennessee in 7 hours, 8 minutes last Sunday.

With the Jets (1-1) holding on to hopes for a late comeback, Frank Gore — who passed Curtis Martin for fourth on the NFL's career rushing list — took a short pass and gained 19 yards on third-and-19 to effectively seal the win.

Darnold was 25 of 41 for 334 yards and a touchdown with the two INTs in his second NFL start, but struggled to get the offense moving throughout the day.

The 21-year-old quarterback got off to a much better start than in the Jets' opener, when his first NFL pass was intercepted and returned for a touchdown. But on the Jets' second possession in this one, Darnold turned it over when his pass intended for Quincy Enunwa was intercepted by McDonald. The Dolphins safety avoided a few tackle attempts and returned it 31 yards to New York's 15.

After two run plays for 9 yards, Drake took the handoff from Tannehill up the middle for a 6-yard run to give the Dolphins a 7-0 lead.

Miami took advantage of another turnover after Darnold completed a 10-yard pass to Robby Anderson, who had the ball knocked out of his hands by Kiko Alonso. Raekwon McMillan recovered for the Dolphins at the Jets 49, giving Miami a short field.

Jakeem Grant took a pitch from Tannehill and gained 5 yards, but Buster Skrine grabbed him by the facemask for a 15-yard penalty. On the next play, Albert Wilson took a short pass from Tannehill, slipped out of Skrine's diving tackle attempt and took off down the sideline for a 29-yard touchdown.

The Jets made another mistake that had the effect of a turnover when Henry Anderson's sack of Tannehill on third-and-6 was negated by a holding penalty on Morris Claiborne, keeping the Dolphins' drive alive. Two plays later, Tannehill connected with A.J. Derby for a 19-yard touchdown, putting Miami up 20-0 after Jason Sanders missed the extra point.

New York showed some life starting with a 44-yard completion from Darnold to Terrelle Pryor.

Darnold completed a pass to Chris Herndon, who fumbled, recovered and tried to get into the end zone, but was tackled at the 1 as time expired, keeping New York off the scoreboard in the opening half.

Darnold and the Jets answered right back to begin the third quarter with a solid drive capped by a 28-yard touchdown catch by Bilal Powell. Jason Myers missed the extra point, making it 20-6.

The Jets, coming off a 48-17 rout of Detroit on Monday night, appeared in great shape when Jordan Jenkins forced and recovered a fumble after a strip-sack of Tannehill gave New York the ball at the Miami 12. But, Darnold's pass to Pryor on the next play was intercepted in the end zone by Howard.

After Avery Williamson recovered a fumbled shotgun snap by Tannehill late in the third quarter, the Jets capped an 11-play drive with a 55-yard field goal by Myers. Myers added a 41-yarder with 5:56 remaining.

The 35-year-old running back reached the milestone with an 8-yard run in the third quarter while playing against Martin's former team. He finished with 25 yards on nine carries.

Dolphins wide receivers Wilson and Kenny Stills were the only two players to kneel during the national anthem.

All of the Jets players linked arms, along with coach Todd Bowles and CEO Christopher Johnson while standing together on the sideline during "The Star-Spangled Banner."

Dolphins: home vs. Oakland next Sunday.

Jets: at Cleveland on Thursday night.