Remembering Don Shula: What others are saying about legendary Dolphins coach 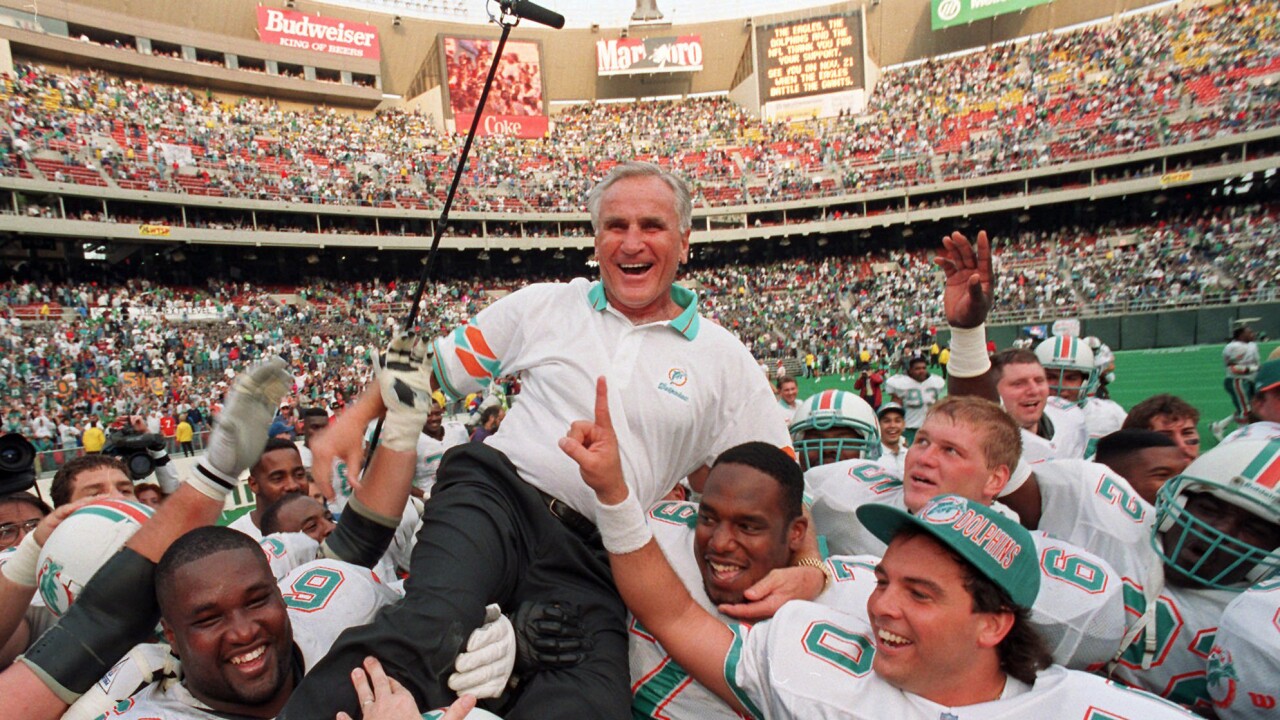 George Widman/AP
In this Nov. 14, 1993, file photo, Miami Dolphins head coach Don Shula is carried on his team&#39;s shoulders after his 325th victory against the Philadelphia Eagles in Philadelphia. Shula, who won the most games of any NFL coach and led the Dolphins to the only perfect season in league history, died Monday, May 4, 2020, at his South Florida home, the team said. He was 90.

Don Shula, the longtime Miami Dolphins head coach who led the team to back-to-back Super Bowl victories in the 1970s and finished his career as the NFL's all-time wins leader, died Monday at the age of 90.

Here's what others are saying about Shula's lasting legacy.

The Miami Dolphins are saddened to announce that Head Coach Don Shula passed away peacefully at his home this morning. pic.twitter.com/MKAtXFA4zd

We express our deepest condolences to the family and friends of former @MiamiDolphins Head Coach Don Shula who passed this morning. pic.twitter.com/aVhQ5FuN4j

Our deepest condolences go out to the family of legendary Baltimore Colts and @MiamiDolphins head coach Don Shula after his passing this morning. pic.twitter.com/55DRpipYA8

Rest in peace to the winningest coach in NFL history, Don Shula. 🙏 pic.twitter.com/4mZ8cjUBl2

Coach Don Shula leaves behind an incomparable legacy as the NFL’s winningest coach and as the one who put Miami sports on the map.

We will remember the great feats, like the only perfect season in NFL history, but also the qualities – hard work, character, decency – that made Don Shula not just a great coach, but also a great man.

Rip, one of the greatest of all time..Don Shula ..he set the standard...will talk later today on FOX

Coach Shula - you will truly be missed! You embody the definition of “greatness.” You brought that winning attitude with you every day and made everyone around you better. (Part 1/2) pic.twitter.com/Ytoi5l7H4F

Thank you for always believing in me. You made me a better player and person. My thoughts & prayers are with the entire Shula family. Love you Coach! #RIP (Part 2 of 2) pic.twitter.com/iFMLip3dCV

“One thing I never want to be accused of is not working.”
RIP Coach Don Shula.

Rest in peace Coach Don Shula. You are a legend and one of the greatest icons the NFL has ever seen.

Prayers for peace and memories of fond times for the Shula family. #Legend

Rest in Peace, Coach @DonShula. My best to the family. #Legend #HOF

We lost one of the most iconic men in the history of NFL coaching in Don Shula. His leadership and wisdom helped to guide me and many others who have made a life in coaching football. Thank you Coach Shula. May your spirit and legacy live on forever. RIP

We lost the greatest coach of all time. RIP Coach Don Shula pic.twitter.com/nVD0nkQm1W

Don Shula was a Giant ofmy childhood. He was the best football coach I have ever seen.He was also one of the kindest nicest gentleman the world has ever seen.Thanks Coach Shues for my favorite sports moments. U gave me most of them. Love u Coach. My heartgoes out to your family. pic.twitter.com/T4uIgW5V86

I met Don Shula when he took over the Dolphins. It was at La Gorce in Miami, where I worked with Jack Grout. Don sat down for lunch with a guy he didn’t know, just talk football. What a wonderfully nice man he was. That started a special friendship I've cherished for 50 years. pic.twitter.com/Li1xoE2BF1

RIP NFL Hall of Fame Coach and 2X Super Bowl champion Don Shula! My prayers go out to his family.