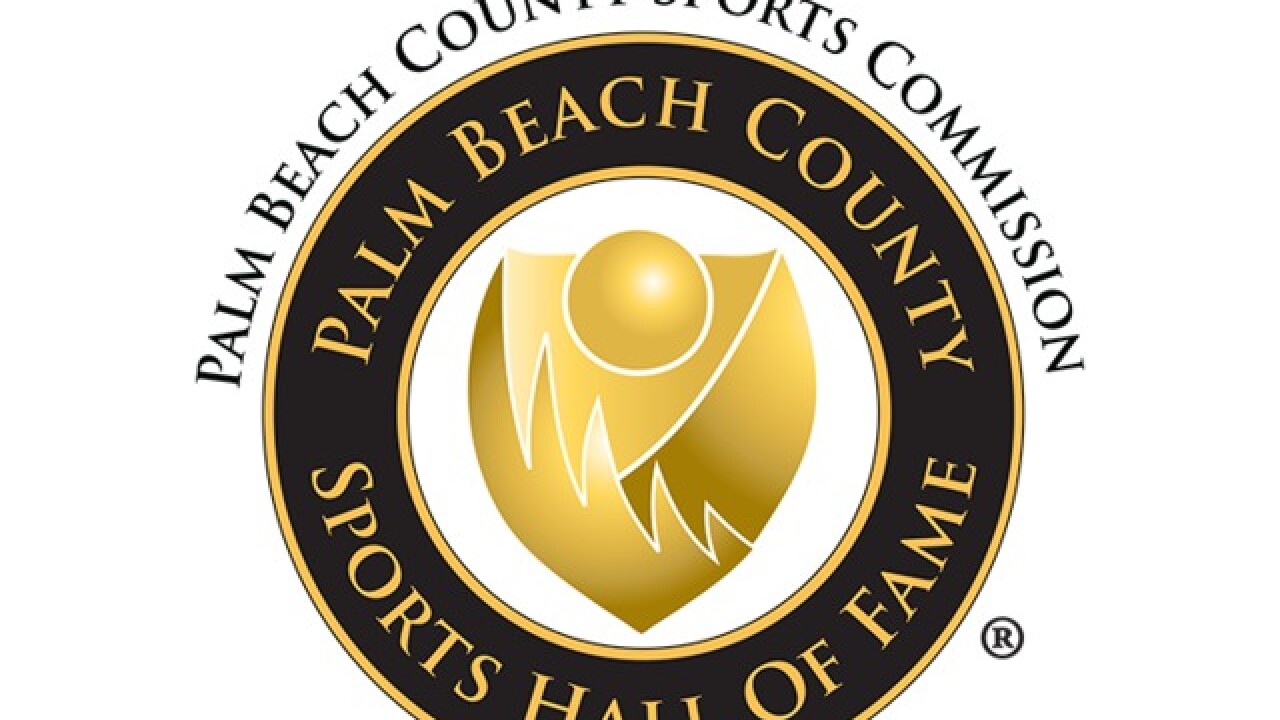 The 2018 Palm Beach County Sports Hall of Fame ceremony presented by the Law Firm of Lytal, Reiter, Smith, Ivey and Fronrath is still two and a half months away, but the inductees were announced Thursday.

Geraldine “Jeri” Athey (posthumously)
Athey was one of the top swimming and diving coaches for more than three decades.  She coached at numerous high schools, including Palm Beach Gardens, Riviera Beach, Cardinal Newman, North Shore and Forest Hill, developing state champions and finalists. Also included were the North Palm Beach Diving Team (her chartered team) and other academies and schools including St. Andrews of Boca Raton. From 1961 to 1987, Athey served the Florida Gold Coast A.A.U. as Senior Women’s Diving Chairman, Vice President, President, Secretary, Treasurer and Chairman of Registration and Junior Olympic Diving. Nationally, she has served on Rules, Finance (Chairman) and Hospitality Committees. She was a delegate to all A.A.U. and U.S. Diving National Conventions. She was also Acting Secretary to National Chairmen at early meetings and was elected Co-Chairman of the National Junior Olympics Committee. She ran the scoring and entries table at the International Swimming Hall of Fame’s International Diving Meet for many years and helped with the Ted Keller Annual Age-Group Diving Meet at the Hall of Fame. She was coach/manager of U.S. age-group teams competing in Winnipeg, Canada (1977), Stuttgart, Germany (1979) and the National Sports Festival (1981) in Syracuse, New York. Ten years after officially retiring at age 80, she began coaching her third generation of divers in the family this summer.  She was honored by the International Swimming Hall of Fame in 2003.

Matthew Cetlinksi has had a swimming career full of accolades. While in high school at Cardinal Newman, he won two state championships and held the Florida High School State record in the 500 Free. (his high school record was not broken until 2004). Committed to University of Florida, Cetlinksi continued his success by earning 8 All-American honors and winning 5 NCAA titles in distance events, including the 500-yard freestyle (twice) and the 1,650 yard freestyle (three times).  He ranks 5th All-Time at Florida in the 500 Yard Freestyle with a record set in 1986 (his record at Florida was not broken till 2009). He also ranked 3rd All-Time at Florida in the 1650 Yard Freestyle and held that record for over 25 years. He was a member of the 1983 and 1984 NCAA Men’s Championship Teams at Florida as well as 4 consecutive SEC Championship teams.  In 2011, he was inducted into the Gator Great Hall of Fame. Cetlinksi was a member of the 4 x 200 meter freestyle relay that won the Gold Medal at the 1988 Olympic Games in Seoul, setting a new world record of 7:12.51.  This time ranks 9th all-time in Olympic competition in this event.  Individually, Matt also placed 4th in the men’s 400 meter freestyle and the men’s 1,500 meter freestyle.

Coached football and baseball in Palm Beach County schools for more than 20 years. Baseball coach at Conniston JHS and assistant football and baseball coach at St. Ann’s HS. Greatest success came at Forest Hill HS where his teams compiled a 70-6 record, winning four Suncoast Conference titles in 1960s. In the classroom, he received a Master Teaching Award from Palm Beach Community College and the Freedom Foundation Medal for outstanding teaching of American Democracy.

Larry Kissner
At Cardinal Newman High School, Larry Kissner was a dominant lineman that played both offense and defense throughout his high school career and lettered 10 times in football, track and wrestling.  His strength and power coupled with excellent technique created a devastating blocker and crushing tackler.  He was selected the 1978 Athlete of the Year in Football for the State of Florida, and started for the South in the All-Star Game.   He was a high school All-American, was named to Newman’s 50th Anniversary team and named one of the Top 100 Players from Palm Beach County.  Larry attended the University of Notre Dame on a football scholarship and continued his multi-sport participation by lettering in both football and wrestling.  He earned Notre Dame’s Herring Award as the most improved player and started at both guard and center during his senior year.

David Pressly
David played in every match in his four-year career at U-Florida, including four SEC tournaments and three NCAA Championships, going 81-15 in singles and 69-21 in doubles. He was  All-SEC all four years, second team as freshman and next three years on first team.  Pressly also won three SEC titles, No. 6 singles and No. 3 doubles as a freshman and No. 2 singles as a junior. Upon graduation in 1976, he was presented the Doug Belden Athletic Award by the U-F Alumni Association given to a graduating senior based on their combination of athletic and academic achievements.

Jim Watt, a longtime resident of Palm Beach County, is a graduate of the University of Miami, and earned his Juris Doctorate from the University of Florida in 1969. Since that time, Jim has been an integral member of the community spending eight (8) years as a member of the Florida House of Representatives, where he sponsored legislation that led to the creation of collegiate license plates.  Jim worked with the University of Miami to create a holiday basketball tournament, where high schools throughout the state participated in what became a successful holiday event.  He worked with the Palm Beach Auditorium to be the home of that tournament.  He joined the Board of Directors of the Palm Beach County Sports Commission in 1992, served as its President for 2 years, and is currently an emeritus member.  In 1992, he proposed the creation of the Lou Groza Collegiate Place-Kicker Award, worked diligently with Lou Groza and the Groza family to secure the naming rights for the Award, which is presented live on the ESPN College Football Awards Show with an audience view of 1 million people, providing national recognition for the Award and for Palm Beach County.