Packers run away with 31-12 win over Dolphins 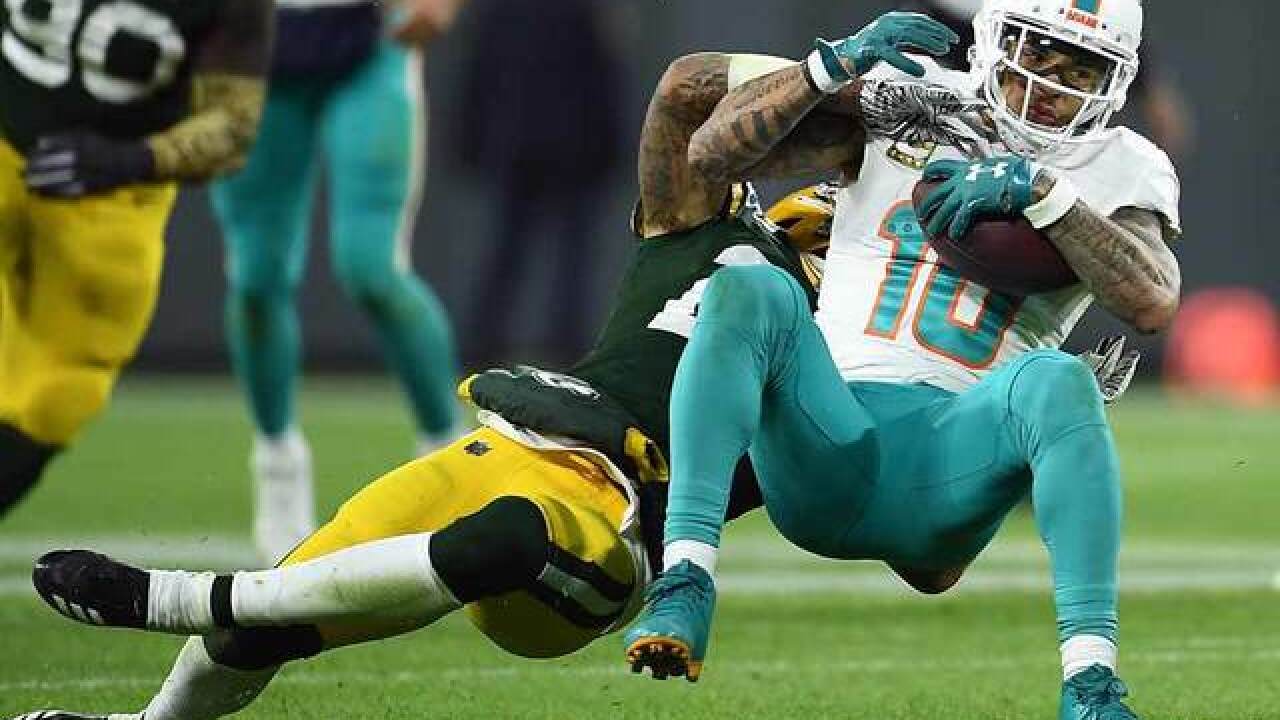 Image copyright 2018 Getty Images. All rights reserved. This material may not be published, broadcast, rewritten, or redistributed.
&lt;p&gt;Kenny Stills #10 of the Miami Dolphins is tackled by Jaire Alexander #23 of the Green Bay Packers during the second half of a game at Lambeau Field on November 11, 2018 in Green Bay, Wisconsin. (Photo by Stacy Revere/Getty Images)&lt;/p&gt;

The Packers (4-4-1) pulled away in the second half, sandwiching scoring drives around cornerback Bashaud Breeland's interception deep in Miami territory. Green Bay went ahead 28-12 on Adams' 25-yard touchdown catch with 7:24 left in the third quarter.

"This league has always been about big plays," coach Mike McCarthy said. "You can't score points without big plays and you have to make big plays to win the game."

Maybe this is the victory that will get the Packers going in the tight NFC North race following a choppy first half of the season.

Jason Sanders tied a Dolphins franchise rookie record with four field goals, but Miami (5-5) couldn't find the end zone. The Dolphins squandered another opportunity on the game-opening drive after Brock Osweiler fumbled away a shotgun snap.

The Packers cashed in on that turnover, too, when Rodgers and Adams connected on their first touchdown for a 7-0 lead.

"We turned it over and we didn't take advantage of opportunities," Dolphins coach Adam Gase said.

His defense also had trouble slowing down Jones, who finished with 15 carries to give Green Bay some much-needed balance.

A slashing style and an explosive burst through the hole make Jones a threat to bust a big run on any carry. He accounted for 54 yards of total offense on the opening drive alone.

Jones added a career-long 67-yarder to give him 96 yards on four carries in the first quarter alone.

Adams had four catches for 57 yards.

Osweiler was 23 of 37 for 213 yards in his fifth start for the injured Ryan Tannehill. Miami had 294 yards of total offense, an admirable effort given that they were missing three starting offensive linemen.

But Osweiler was sacked six times, including three straight plays late in the fourth quarter.

"Overall, I just need to be better and this organization deserves better because we left a lot on the table out there tonight," Osweiler said.

A 9-yard run with about 3½ minutes left in the first quarter put Miami's Frank Gore over the 500-yard mark for an NFL-record 14th straight season. He broke a tie with Hall of Famers Emmitt Smith and Walter Payton.

Jones said he had about 10 family members, including both of his parents, in the stands at Lambeau to watch his career night.

"It means a lot. I didn't tell anybody, but I made this game for my parents. So now I've got two touchdown balls to give to both of them," he said. "It works out. It's a blessing."

Sanders booted a kickoff out of bounds after his fourth field goal to allow the Packers to start their next drive at the 40, which ended with a 10-yard touchdown run by Jones.

Gase said the team believed they could win on Sunday despite so many injuries, not including the ones that happened during the game. Miami forced two turnovers on special teams, blocking a punt and forcing Tramon Williams to fumble on a return for good field position each time.

"That field position, we didn't take advantage of," Gase said. "Those type of things, you can't do against this guy (Rodgers). You do that, it's just a matter of time before he makes it right."

"It's heartbreaking ... and then you have a fire in my adopted home of southern California, so it's been a tough week for sure, and myself and the guys from northern California, our thoughts and our prayers are with those folks." — Rodgers, who was born in Chico, California, on the wildfires ravaging the state. He wore a dark blue cap from the Santa Monica Fire Department after the game.

Packers: A defense already missing CB Kevin King (hamstring) lost two more starters in the first half when S Kentrell Brice departed with an ankle injury and linebacker Nick Perry limped off with a knee injury. Brice (knee) and Perry (ankle) had been on the injury report last week for other ailments. ... OL Lucas Patrick (concussion protocol) did not return after taking a hard hit while returning a short kickoff in the first quarter. ... In the fourth quarter, Breeland left with a groin injury.

Dolphins: Have a bye next week before a trip to Indianapolis on Nov. 25.