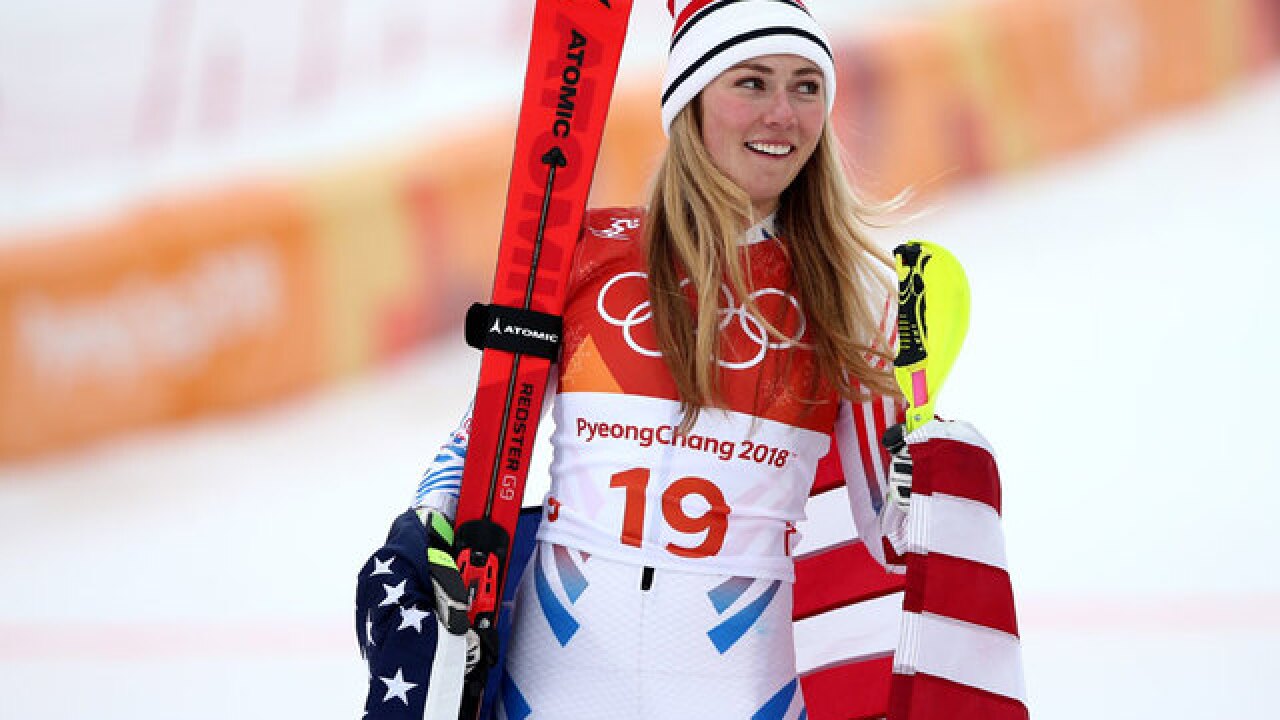 Copyright 2018 Scripps Media, Inc. All rights reserved. This material may not be published, broadcast, rewritten, or redistributed.
&lt;p&gt;Silver medalist, Mikaela Shiffrin of the United States celebrates on the podium during the Ladies' Alpine Combined on day thirteen of the PyeongChang 2018 Winter Olympic Games at Yongpyong Alpine Centre on February 22, 2018 in Pyeongchang-gun, South Korea. (Photo by Dan Istitene/Getty Images)&lt;/p&gt;

JEONGSEON, South Korea (AP) — Michelle Gisin had been perplexed by the slalom for some time, showing a flair for the discipline but rarely putting together an exceptional full run.

That is until gold was on the line.

Lindsey Vonn, the leader after the downhill portion, made a mistake early in the slalom and didn't finish in what was likely the final race of her Winter Games career.

Gisin finished in a combined time of 2 minutes, 20.90 seconds to eclipse the silver-medalist Shiffrin by 0.97 seconds in overcast conditions and with the artificial lights turned on for extra visibility. Wendy Holdener of Switzerland was 1.44 seconds back to earn the bronze.

"I tried to put my heart into that run," Gisin said. "It's insane."

And another medal for the Gisin household. Her older sister, Dominique, finished in a tie for downhill gold four years ago in Sochi.

"The best ever. It makes everything more beautiful," Michelle Gisin said. "She gave her all. I gave my all. We did it."

Speaking of medals, add one more to Shiffrin's burgeoning collection. She won Olympic gold in the giant slalom a week ago and captured the slalom title at the 2014 Sochi Games.

"It's a nice way to end the Olympics," said Shiffrin, who narrowly missed a podium spot in the slalom, finishing fourth. "I started off with a bang and ending with a medal on the podium is really cool."

After crossing the finish line, Gisin celebrated with exuberance as Shiffrin clapped for her. Gisin was in third position after the downhill leg and had a 1.21-second advantage over Shiffrin.

Gisin was able to hold off Shiffrin, who's one of the world's best slalom skiers. It shouldn't be a surprise, given that Gisin came up as a slalom racer and captured a silver medal in the combined at the world championships last February.

Holdener added bronze to the silver she won in the slalom last week. To be on the podium with a friend and teammate? A priceless experience.

"It's so nice to celebrate with her," Holdener said of Gisin. "She just skied so good today."

Going last and wearing her neon-colored shin guards, Vonn hooked a tip on the gate, ending her day.

Vonn also led after the downhill leg at the 2010 Vancouver Games. She didn't finish the slalom that time.

Asked before the slalom race exactly how much slalom training she's done lately, Vonn smiled, curling her index finger and thumb to make a "0."

"I took one warmup run going to the slalom inspection in Lenzerheide," Vonn said, alluding to her fourth-place finish at the World Cup stop in Switzerland in the combined last month. "So those are my last two slalom runs. And before that I did one day of slalom training before Christmas. So that's the extent of my slalom training this year."

This was very likely the first and only time Vonn and Shiffrin will meet in an Olympic race.

At 33, Vonn's already the oldest female Alpine ski racer to earn a medal with her bronze in the downhill on Wednesday. That goes with the gold from the 2010 Games. She didn't compete at the Sochi Games because of a knee injury.

"I take a lot of great memories with me. I've had such a great experience with my teammates here," Vonn said. "When you're older you have a different appreciation for life and the experiences you've had. I greatly appreciate my team, everyone who helped get me here, my friends and family.

The combined was originally slated to be held Friday, but it was moved up a day due to the weather forecast of high wind. With the sun darting in and out and a light snow falling for the slalom, the artificial lights lining the course were switched on.

The last race on the Alpine side will be Saturday with the team event making its Olympic debut. Many of the top racers such as Hirscher, Vonn and Shiffrin are planning to skip the race — and another chance at a medal — to prepare for the resumption of the World Cup schedule.