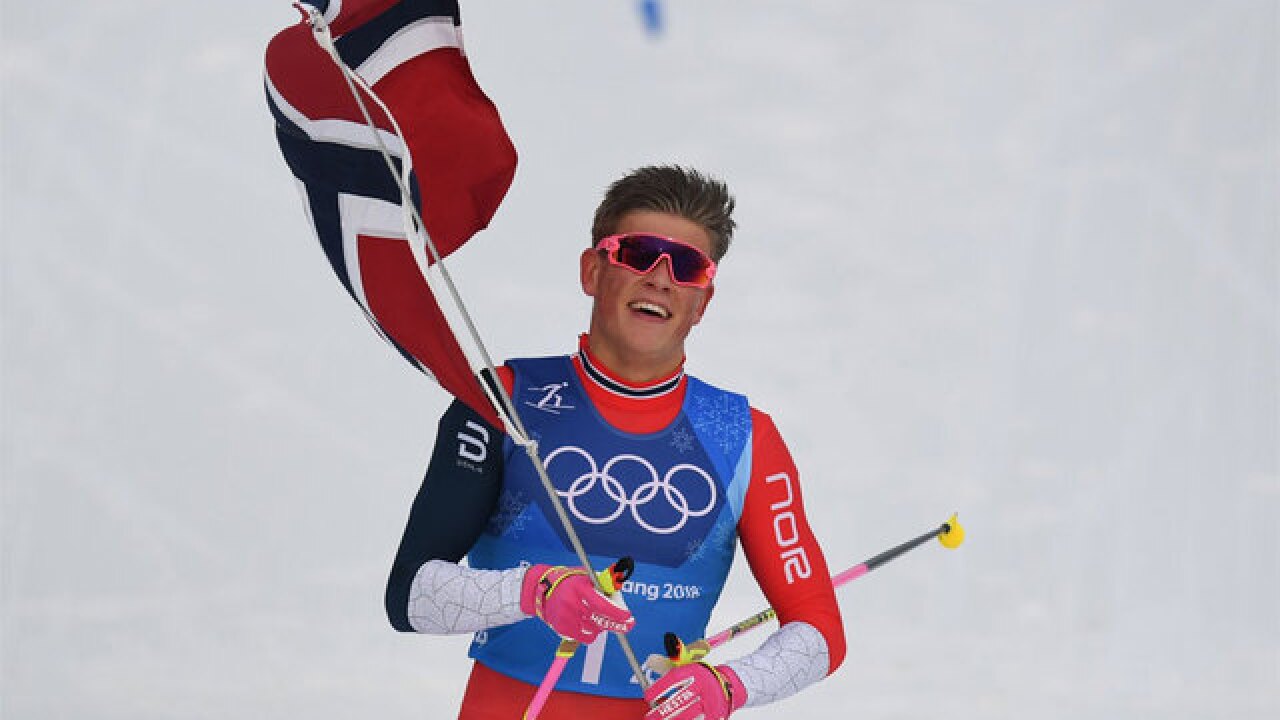 (CNN) -- It's a nation made up of only 5.2 million people, but as far as the Winter Olympics goes Norway is on top of the world.

Norway has dominated not only PyeongChang 2018, but has also won more medals than any other nation since the first Winter Olympics in 1924 -- with 330 in total according to data compiled by Sports Reference.

But that's not all. With only a few days left of this year's Games, Norway has won a staggering 38 medals -- 13 of those being gold.

That's nine medals more than Canada overall and 10 clear of Germany, which also has 13 golds to sit second in the medal table. Team USA is 15 medals behind Norway.

Norway's latest medal, a bronze in team alpine skiing, took it past USA's record of 37 medals set at Vancouver in 2010. It is also one away from equaling Canada's mark of 14 golds, also set at Vancouver.

"I knew that if we won a medal today we would make history for Norway," said Leif Kristian Nestvold-Haugen, part of the Norway skiing team.

"Even underneath the suit I get goosebumps talking about it, that the Alpine team could get that 38th medal."

Born with skis on their feet?

With Norway's population roughly the same size as the US city of Atlanta, the Scandinavian country has has one great advantage over its Olympic rivals -- it has almost unlimited access to snow with 30,000 kilometers of marked trails.

Team Norway's Johannes Høsflot Klæbo -- who has won three gold medals at these Games -- told CNN Sport that skiing is a part of Norwegians' lives.

"We always say you are born with your skis on," said the 21-year-old cross-country skier. "On Sundays everyone goes into the woods with their skis on ... everyone wants to do it."

Winning by focusing on not winning

However, developing talent is never an easy process -- often children can be pressurized by coaches and parents and sometimes fail to realize their early promise.

In Norway, children are encouraged to join local sport clubs to help with their social development but there's strict rules which prevents anyone from keeping score -- no one can be ranked first to last until they turn 13.

"We want them to be in sports because they want to be," Tore Øvrebø, head of the Norwegian team, explained to CNN Sport. The focus is on other aspects, he says, not the competitive side.

"Instead (of winning) they want to have fun and they want to develop not only as athletes but as social people."

He says the Nordic nation's focus is to let children create and navigate their own path.

"The point is to ask what is in a sport for kids," he said. "We have a responsibility to give kids a nice sport to develop in so we're thinking the other way around -- not, 'OK, we need so many kids to make a national team.'"

"I think we are very good at organizing events early on. You don't get a fully fledged downhill skier or cross country skier in a short while. It starts when you're young.

"There's a large focus on sports and athletics among young people (in Norway) and some of them get very good because they're living close to downhill ski arenas or have parents who will drive them a long way to get to training."

Many Team Norway athletes have also competed in more than just one event.

While that can be seen as a strategic way of competing -- given it arguably increases the country's chances of winning more medals -- Øvrebø says that's more of a happy coincidence.

"They're the most popular sports in Norway," he explained. "We didn't have to do that strategically -- we just kept on and professionalized the sports that we were already in love with. So that makes the recruitment process quite easy.

Of the athletes who competed in Korea, 16 of them have won more than one medal.

Norwegian cross-country skier, Marit Bjoergen, is among them -- and now holds the title of most decorated Winter Olympian of all time -- after earning gold in the ladies' 4 x 5km relay, silver in the 15km skiathlon, and bronze in both the 10km freestyle and team ski sprint.

By applying her skills in more than one event, she was able to help secure the Nordic country four medals in total.

Her achievements mean the country now has the top three most decorated Winter Olympians of all time -- just behind Bjoergen's 14 medals is biathlete Ole Einar Bjoerndalen with 13, and cross-country skier Bjorn Daehlie with 12.

All of them competed in sports which had multiple events and relays.

Despite being the current leader in Winter Olympic medals, there have been times when Norway suffered dismal results -- notably at the Calgary 1988 Winter Olympics. Here, it failed to win even one gold.

That's when Norway's sporting body restructured and before hosting the Winter Games in Lillehammer in 1994, it established a national elite sports center -- the Olympiatoppen -- to train and develop Norway's best athletes.

"When there was a crisis something had to happen," Øvrebø explained. "The sporting systems in the rest of the world were more and more professionalized and we didn't do the same in Norway."

He said there was a huge change after the center was set up.

"It was a new way of thinking for sports. (Federation) presidents were not that important any more and we wanted to have professional people working directly with high performance."

Since 1994, the establishment of Olympiatoppen has overseen 20 years of significant improvement -- most particularly in cross-country skiing.

Funding for the Olympatoppen has also increased exponentially.

While funding helps, Øvrebø also says Norway's high standard of living also plays a part in creating world-class athletes, notably in offering free healthcare and education. According to the World Economic Forum, Norway "is a star performer across almost every one of the OECD's indicators both for material conditions and quality of life."

"That makes people quite well off at the beginning," adds Øvrebø. "It means they can follow their interests -- it's a very humanistic approach."

As a result, he says, many kids are choosing to play sport. "That makes the population that we can recruit athletes from quite high -- we have all these people doing sport and the possibility to do it because they're healthy and are being taken care of."

As the Winter Olympics come to an end, cross-country skier Klæbo said Team Norway had built strong relationships among the athletes who went to Pyeongchang.

"It's quite cool to be a part of it because everyone inspires everyone," he said. "Back at the hotel we are friends hanging around and just trying to compete with each other and having fun."

Now, the world must brace itself for what Norway might do at the 2022 Winter Olympics in Beijing.