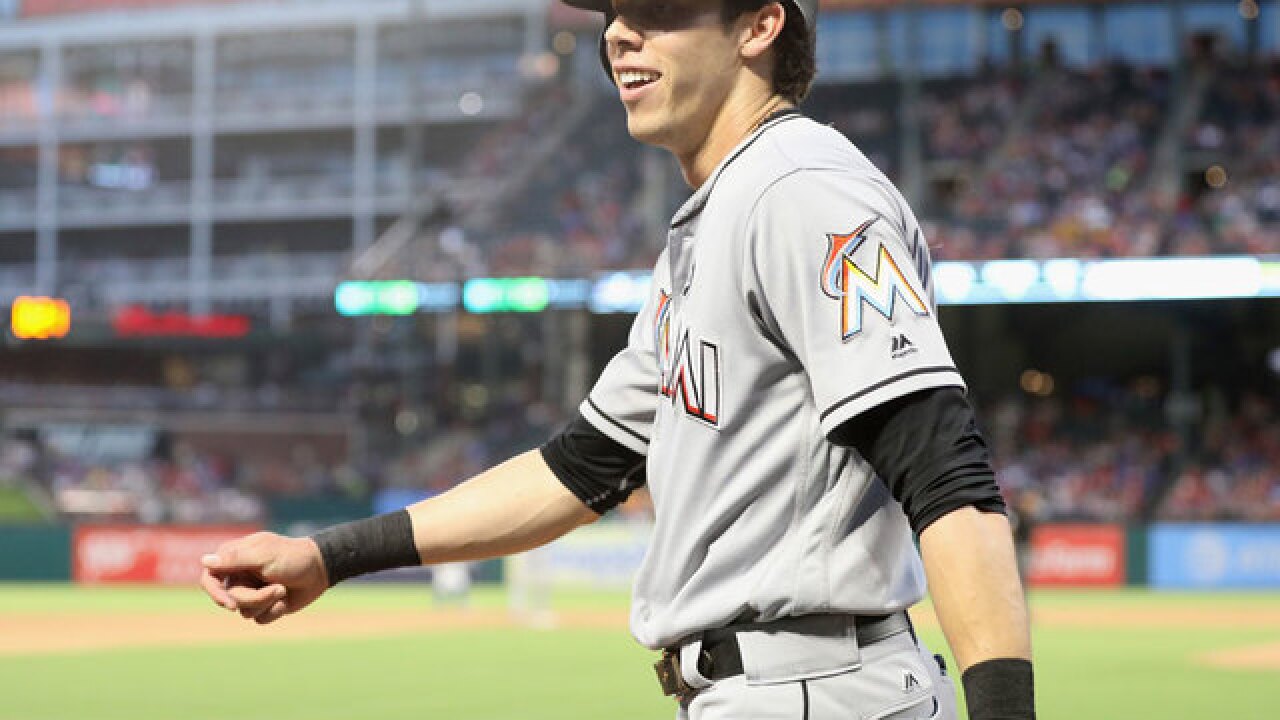 Image copyright 2017 Getty Images. All rights reserved. This material may not be published, broadcast, rewritten, or redistributed.
&lt;p&gt;Christian Yelich #21 of the Miami Marlins celebrates after scoring against the Texas Rangers in the sixth inning at Globe Life Park in Arlington on July 24, 2017 in Arlington, Texas. (Photo by Ronald Martinez/Getty Images)&lt;/p&gt;

And so the Marlins' dismantling marathon continues.

Hill made the trade as he began a trip to run seven marathons on seven continents in seven days. Former Marlins executives David Samson and Jeff Conine also are taking part in the charity event.

"I'm boarding a plane for South Africa," Hill said. "The job goes with you wherever you are. When the opportunity presents itself to make our organization better, you do what you need to do."

Yelich batted .282 with 18 homers and 81 RBIs last year, and he is a career .290 hitter. In the wake of Miami's earlier deals this offseason, he said he preferred to play elsewhere rather than be part of a rebuilding effort.

His preference wasn't an impetus in the deal, Hill said.

Yelich said the emotions of the Marlins' fire sale have been crazy and exhausting.

"There was a lot of stuff this offseason that was out of the norm," he said. "For me it's almost more of a relief that it's over, and get back to playing baseball and doing what I love to do. ... I'm just excited for the fresh start."

Yelich will make $7 million this season in the third year of a $49.57 million, seven-year deal.

The outfielder's market value was high because of his contract, and the haul of prospects may be the best yet for the Marlins.

The 23-year-old Brinson batted .106 in 47 at-bats with the Brewers as a rookie last year but was rated as their top prospect. A native of Fort Lauderdale, he grew up in South Florida.

Brinson will compete for a roster spot this spring, while the other three prospects likely will begin this season at Double-A, Hill said.

Miami hasn't had a winning season since 2009 and went 77-85 last year. Season-ticket holders have complained about the direction of the franchise under Jeter, but he has said payroll and a stronger farm system are the only path to sustained success.

The Marlins might not be done dealing this winter. Catcher J.T. Realmuto, one of their few remaining established players, has requested a trade.