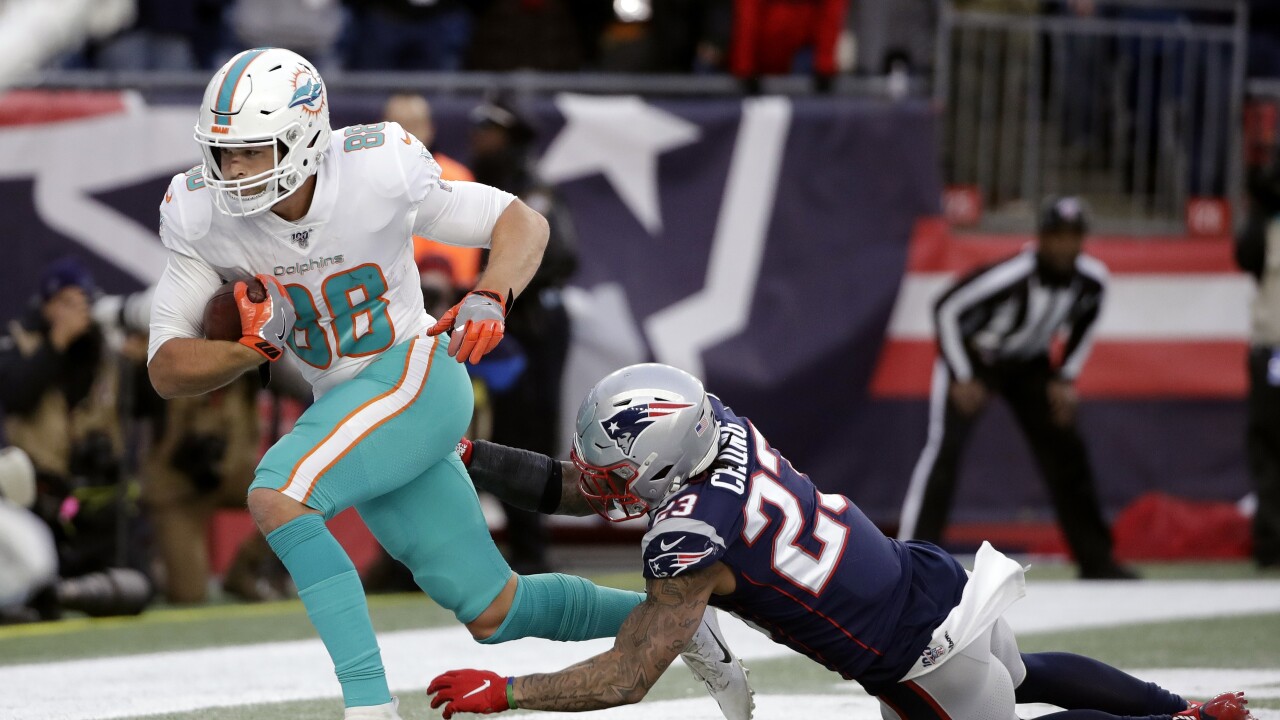 (Copyright 2020 The Associated Press. All rights reserved. This material may not be published, broadcast, rewritten or redistributed.)
Elise Amendola/AP
Miami Dolphins tight end Mike Gesicki, left, catches the winning touchdown pass in front of New England Patriots safety Patrick Chung in the second half of their game, Sunday, Dec. 29, 2019, in Foxborough, Mass.

Miami and the rest of the NFL on Thursday night unveiled their 2020 schedule, which was delayed nearly a month because of the coronavirus pandemic.

The Dolphins will face the Buffalo Bills in their home opener Sept. 20 and host the Cincinnati Bengals and No. 1 draft pick Joe Burrow on the first weekend in December.

Miami will play consecutive AFC East Division opponents to begin the season and play four of its first six games on the road.

The team also announced its preseason schedule, which kicks off Aug. 13-17 at the Atlanta Falcons and concludes Sept. 3-4 at the New Orleans Saints. Sandwiched between those trips are a pair of games at Hard Rock Stadium, beginning with the Philadelphia Eagles (Aug. 20-24) and the Detroit Lions (Aug. 27-30).

at New England Patriots (Sept. 13)
Miami will open the 2020 season in the same place where the 2019 season ended. The Dolphins defeated the Patriots 27-24 last December, winning in New England for the first time since 2008. Can second-year head coach Brian Flores, a longtime Patriots assistant under Bill Belichick, improve to 2-0 on the road against his former boss?

Buffalo Bills (Sept. 20)
The Bills were the only AFC East Division team to sweep Miami last season and have won five out of six against the Dolphins since 2017. Miami opens with back-to-back divisional opponents for the first time since 2014.

at Jacksonville Jaguars (Sept. 24)
Miami's lone prime-time game is on a Thursday night just a few hours north along Interstate 95. The Dolphins have lost each of their last two meetings against the Jaguars, including a 23-20 stunner on their last trip to Jacksonville in 2015.

Seattle Seahawks (Oct. 4)
Seattle quarterback Russell Wilson and the Seahawks will try to leave South Florida victorious for the first time since 1996. Wilson hasn't played at Hard Rock Stadium since his rookie season in 2012.

at San Francisco 49ers (Oct. 11)
This will be Miami's first-ever visit to Levi's Stadium. The 49ers, who went to the Super Bowl last season, dealt running back Matt Breida to Miami in a draft-day trade last month. Breida was the 49ers' second-leading rusher in 2019, but he was made expendable with the emergence of Raheem Mostert, who briefly played for the Dolphins before finding a home in San Francisco.

at Denver Broncos (Oct. 18)
The Dolphins will visit the Mile High City for the first time since 2014. Directing the offense for both teams back then were former first-round quarterbacks Peyton Manning (now retired) and Ryan Tannehill (who was cast away by Miami and led the Tennessee Titans to the AFC Championship game last season). This year's first-round picks have something in common -- Miami quarterback Tua Tagovailoa (No. 5 overall) and Denver wide receiver Jerry Jeudy (15th overall) were teammates together at Alabama.

Los Angeles Chargers (Oct. 25)
Miami lost to the Chargers at home last season for the first time since 1982. But that was with quarterback Phillip Rivers, who has since been released. By the time this game rolls around, it could be Tagovailoa vs. Justin Herbert, whom the Chargers selected with the very next pick in this year's draft.

Los Angeles Rams (Nov. 1)
For the second week in a row, Miami hosts a team from Los Angeles. This time it's the Rams and quarterback Jared Goff, who made his first career start against the Dolphins in 2016. The Rams are 5-1 all-time at Miami. The lone win was in 1976, when the Dolphins still played at the defunct Orange Bowl.

at Arizona Cardinals (Nov. 8)
Ex-Cardinals quarterback Josh Rosen returns to Arizona, where he went from top-10 draft pick in 2018 to splitting time with Ryan Fitzpatrick as the Dolphins' starter last season. Rosen ended the 2019 season on the bench. With the addition of Tagovailoa, are Rosen's days in Miami numbered?

New York Jets (Nov. 15)
Adam Gase is still in search of his first win at Hard Rock Stadium since being fired after the 2018 season. His first season in New York got off to a 1-7 start, but the Jets went 6-2 the rest of the way, building some momentum heading into 2020. Jets quarterback Sam Darnold is 1-3 in his career against the Dolphins.

at New York Jets (Nov. 29)
Miami must face the Jets in consecutive games sandwiched around a bye week. Gase was 23-26 in three seasons as head coach of the Dolphins, including a playoff appearance. The Dolphins lost by a point at MetLife Stadium last season, improving Gase to 1-1 against his former team.

Cincinnati Bengals (Dec. 6)
The Dolphins beat the Bengals 38-35 last season, positioning Cincinnati to select former LSU quarterback and Heisman Trophy winner Joe Burrow with the No. 1 pick in last month's draft. In the end, there was no need to "tank for Tua" as both teams got their guy. Was it worth it? This game might be a glimpse into the future.

Kansas City Chiefs (Dec. 13)
The Chiefs return to the stadium where they won Super Bowl LIV. Kansas City quarterback Patrick Mahomes, who was Super Bowl MVP, surpassed ex-Dolphins quarterback Dan Marino's record for touchdown passes in his first two seasons as a starter. Miami has defeated the defending champions in three of the last five years.

New England Patriots (Dec. 20)
This will be the first time since 2008 that someone other than Tom Brady lines up at quarterback for the Patriots in South Florida. Brady won six Super Bowls in 20 seasons with the Patriots, but he was just 8-10 at Hard Rock Stadium. He made amends for the "Miami Miracle" in 2018, blanking the Dolphins 43-0 last September.

at Las Vegas Raiders (Dec. 26-27)
Miami will commemorate the Raiders' first season in Las Vegas with a trip to the desert. Jon Gruden and the Raiders spent the last three years in Oakland, but now they have a shiny new stadium and sexy city to show off.

at Buffalo Bills (Jan. 3)
Bills quarterback Josh Allen always seems to play his best against Miami. The 2018 first-round draft pick tied a career high with three touchdown passes and ran for another score the last time the Dolphins played Buffalo. Miami hasn't beaten the Bills in Orchard Park since 2016.

The Dolphins were initially scheduled to host a game in London this season, but the NFL canceled all international games amid the pandemic.