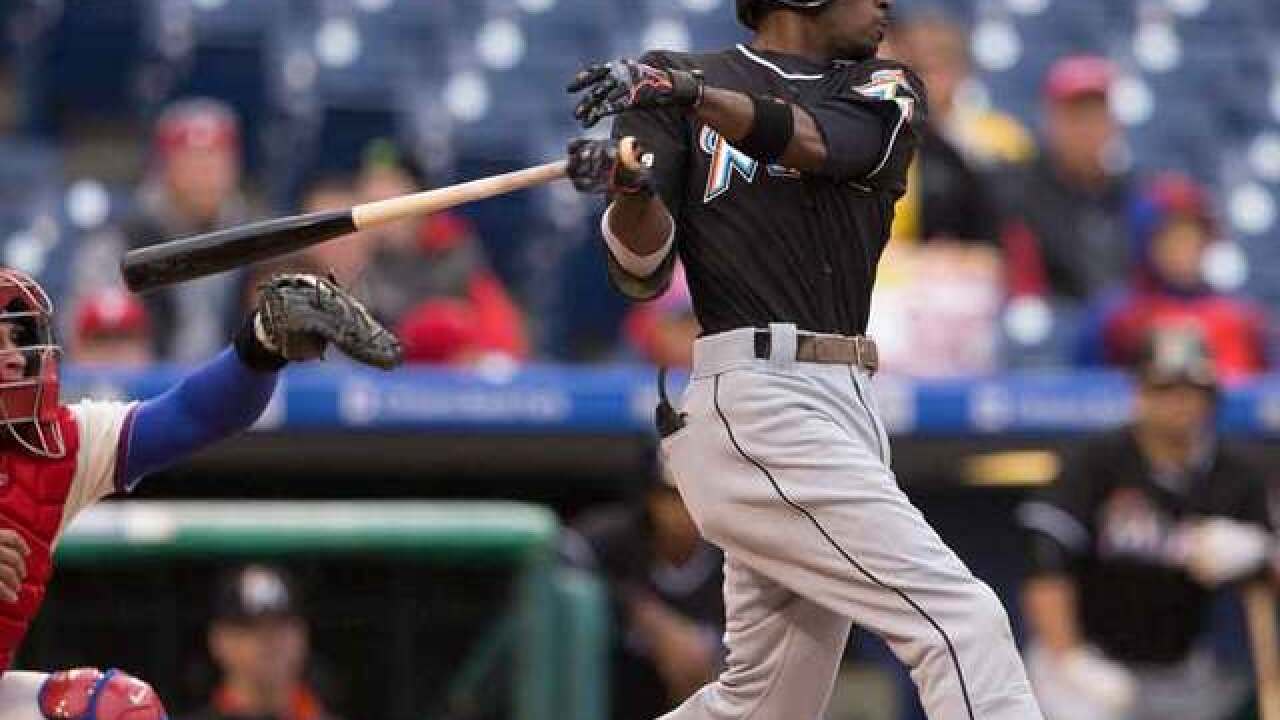 &lt;p&gt;Dee Gordon #9 of the Miami Marlins hits an RBI single in the top of the second inning against the Philadelphia Phillies on October 3, 2015 at Citizens Bank Park in Philadelphia, Pennsylvania. (Photo by Mitchell Leff/Getty Images)&lt;/p&gt;

MIAMI (AP) — The Marlins' latest payroll purge began not with Giancarlo Stanton, but with Dee Gordon.

The two-time All-Star second baseman was traded Thursday to the Seattle Mariners for three prospects in the first big deal involving new Marlins CEO Derek Jeter. He wants to cut payroll by more than 20 percent to $90 million or less, which is why NL MVP Stanton is also on the trading block.

Miami acquired right-hander Nick Neidert, the Mariners' No. 2 prospect, along with infielder Chris Torres and right-hander Robert Dugger. The Marlins haven't been to the playoffs since 2003, and they're anxious to bolster a farm system that ranks among baseball's worst.

"We need to add depth," president of baseball operations Michael Hill said. "We need to do things to give us an opportunity to build an organization that we feel can win consistently. In this deal we took an All-Star caliber player in Dee Gordon, and were able to add three very talented pieces to our minor league system."

The Mariners get $1 million in international signing bonus pool allotment, boosting the amount they can offer Japanese star pitcher and outfielder Shohei Ohtani to a major league-high $3,557,500, just ahead of the Texas Rangers ($3,535,000). They assume Gordon's contract, which guarantees him $38 million through 2020.

This is the Marlins' fourth dismantling since 1998 under three owners. They had a franchise-record payroll of $116 million last season but lost 85 games and lots of money while finishing last in the National League in attendance for the 12th time in 13 years.

Jeter has warned of unpopular decisions this offseason, and with fans anticipating them, he drew boos at a Miami Heat game this week.

The popular Gordon batted .308 in 158 games in 2016, and had 60 stolen bases to lead the major leagues for the third time in the past four years. He won the NL batting title in 2015 when he hit .333, and also won a Gold Glove that year. He made the All-Star team in 2014 and 2015, then served an 80-game suspension the following year after a positive test for exogenous testosterone and Clostebol, substances he said he took unknowingly.

Gordon said he had anticipated being traded in the aftermath of ace Jose Fernandez's fatal boat crash in September 2016.

"Bad things happened over there with the death of our good friend Jose," Gordon said. "Honestly there's kind of no way to rebound from that other than start over. It was built on Giancarlo and Jose, and we lost the focal point for our pitching, a guy who we knew was going to give us a chance to win every day. Honestly in the major leagues, that's pretty tough to win that way."

The Marlins have agreed to the parameters of a potential Stanton trade with the San Francisco Giants. The St. Louis Cardinals have also sought the right fielder, with each team offering a package of prospects. The major league home run champion can veto any deal because his record $325 million, 13-year contract includes a no-trade clause.

The Gordon trade increases the likelihood the Marlins will keep outfielders Christian Yelich and Marcell Ozuna, but with the winter meetings beginning Sunday, Hill wouldn't rule anything out.

"They'll be Marlins until they're not," he said. "We'll head into the winter meetings with open minds. ... We have good players. I talk to all of my counterparts about any number of our guys, and we'll continue to do so as we look for ways to improve."

Hill said the key acquisition in the Gordon deal was Neidert, who went 11-6 with a 3.45 ERA as a 20-year-old in 2017 and finished the season at Double-A Arkansas.

"We like all three players," Hill said, "but Neidert is probably the closest to the major leagues. We like his ceiling."