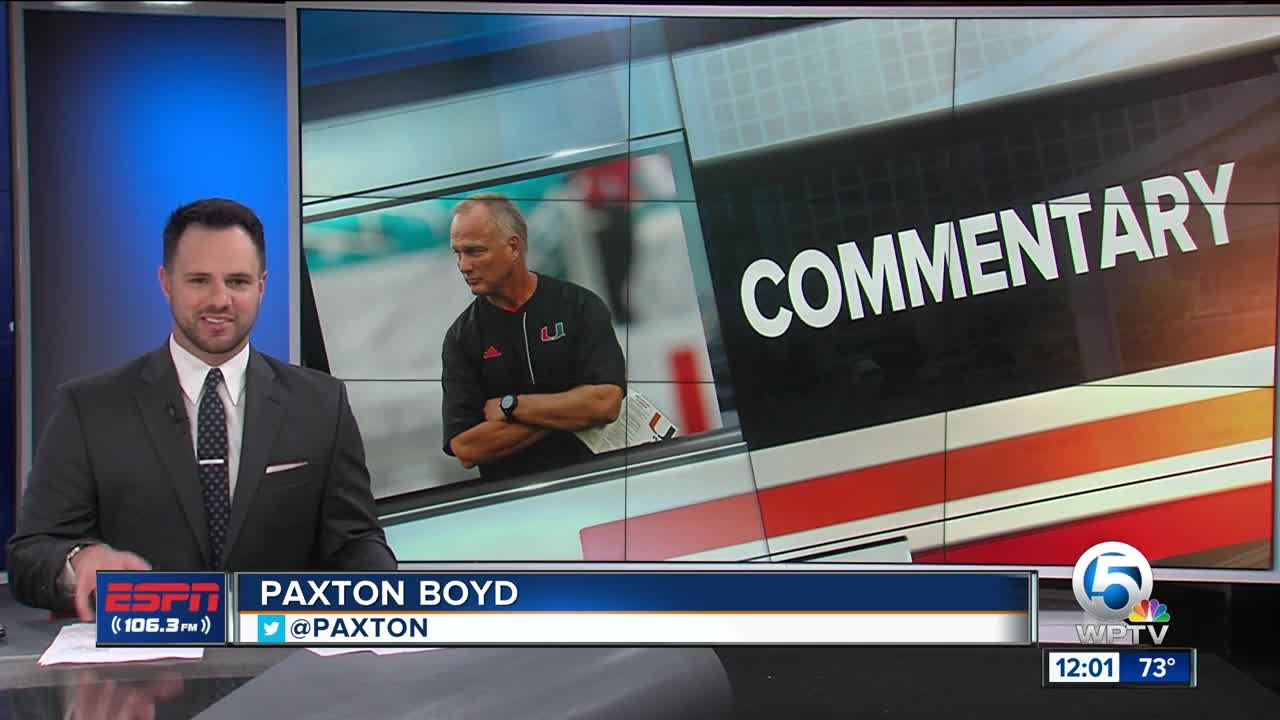 Paxton Boyd of ESPN 106.3 reacts to the crazy day of Miami Hurricanes football. 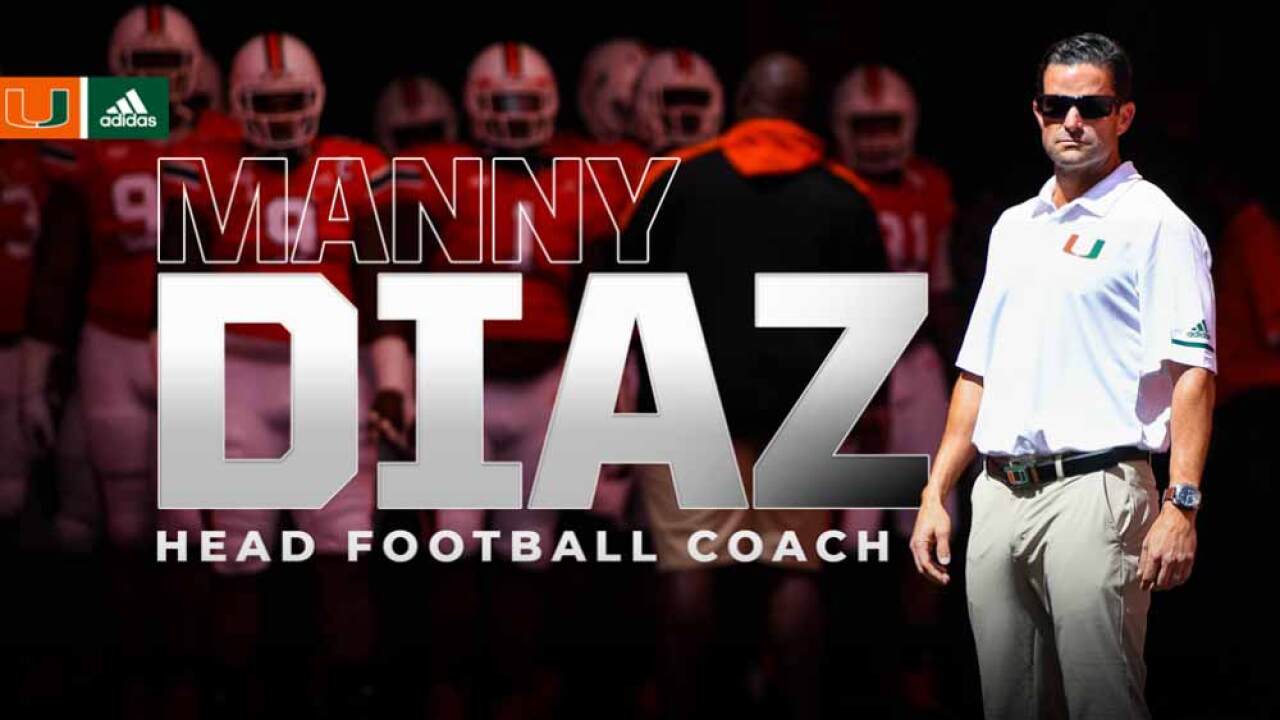 And then the phone rang.

What happened over the next 12 hours or so represented perhaps the most whirlwind day of his career, and certainly one of the wildest days in the history of Miami football. Mark Richt stunned the program by retiring as coach Sunday morning, the school gathered itself to begin a search for his replacement a few hours later, and before the day was done Diaz was announced as the new leader of the Hurricanes.

The Hurricanes' defensive coordinator for the past three seasons agreed to a five-year contract to take over the program, and Miami's new coach never truly left Miami.

The 25th Head Coach of the Miami Hurricanes: @Coach_MannyDiaz https://t.co/wuJfpy9TGg

Diaz took the job as Temple coach earlier this month, remained at Miami to coach his defense one last time in the Pinstripe Bowl last week — and was prepping for the move to Philadelphia.

The Turnover Chain is staying in Miami, and so is the guy who came up with college football's best piece of sideline schtick.

"Miami is home," Diaz said, a native of the city where his father once was Mayor. "The University of Miami is home. The U has truly been 'the job' for me since I first got into coaching. Having worked here over the past three years, I came to understand what it means to be part of 'The U' and came to appreciate the passion and commitment to excellence of all who proudly call themselves Canes.

"We will restore the football program to its place among the nation's elite and we will do it with hard work, dedicated coaches, and outstanding student-athletes."

Players were told Sunday night, and were thrilled.

"I give this coach all my respect," Miami running back Camron Davis said.

Temple was not so thrilled, though athletic director Patrick Kraft released a statement wishing Diaz well.

"We are disappointed that he is leaving, but wish him the best as he returns home," Kraft said.

It's the second time that Miami has technically hired Temple's coach away from the Owls: The Hurricanes brought in Al Golden from there in 2010, and eventually replaced him with Richt in 2015.

Richt got Miami to its first Atlantic Coast Conference championship game last season, after starting that year 10-0 and rising to No. 2 in the AP Top 25. But the Hurricanes are 7-9 since, went 7-6 this season, were blown out by Wisconsin in the Pinstripe Bowl on Thursday night and were horrendous on offense at times in 2018 — totaling just 100 passing yards in their last two games of the season.

When announcing his retirement, Richt said he wants Miami to experience greatness again and that he decided someone else would have to lead the Hurricanes there.

So he stepped down, days after the end of an underachieving season and with five years left on his contract.

"My love for The U is simply great," Richt said. "My true desire is for our football program to return to greatness, and while terribly difficult, I feel that stepping down is in the best interests of the program."

James and Richt spoke Saturday about the direction of the program. James said there was no indication that Richt would retire during that conversation, though he declined to offer specifics about what was said.

"I wanted Mark to be our coach," James said Sunday at a news conference. "Last night, I thought he was our coach."

"I don't think it's a secret to anyone here that as a program offensively we hadn't operated at the level that any one of us would want including Mark, and we talked about what we need to look at and do differently," James said. "Mark is a very smart guy and he recognized that things needed to change on that side of the ball."

Through Saturday, Miami was ranked fifth nationally in total defense this season and 18th in scoring defense out of the 130 teams at the FBS level. The Hurricanes were 67th in scoring offense, 104th in total offense and 112th in passing offense — all areas in which Miami expected to excel when it hired Richt back to lead his alma mater.

Earlier in 2018, Richt signed an extension that would have kept him at Miami through 2023. But this year clearly took a toll — Miami lost four straight games midway through the season, with Richt calling that time "probably the most difficult time that I have been through as a coach."

"The decision came after a great deal of thought, discussions with my family, and prayer," Richt said. "This was my decision."

The 58-year-old Richt told his staff Sunday morning that he was retiring and informed James of his decision around the same time. With players away for the holiday break, Richt and James alerted them by text and email shortly before the school issued a news release.

James said around 3:30 p.m. that a nationwide search was underway.

Turns out, he didn't need to look far.

"Manny is one of the nation's elite coaches and the Canes' Family has already embraced him and his incredible work ethic over the past three years," James said. "He is absolutely the passionate and innovative leader that our program needs, and we will work together to build an incredible staff to move our program back into championship contention."

Diaz also apologized to Temple for the bizarre circumstances.

"I hate the way this unfolded with respect to Temple," Diaz said. "I was given a tremendous opportunity to lead the Temple program and I was actively engaged in doing just that when I woke up this morning. ... I do hope that the Temple players, administration and fans appreciate the uniqueness of this situation and the overwhelming pull to stay home."