Tua Tagovailoa 'excited' for opportunity but 'felt for Fitz'

Dolphins QBs share thoughts after Fitzpatrick benched in favor of No. 5 pick 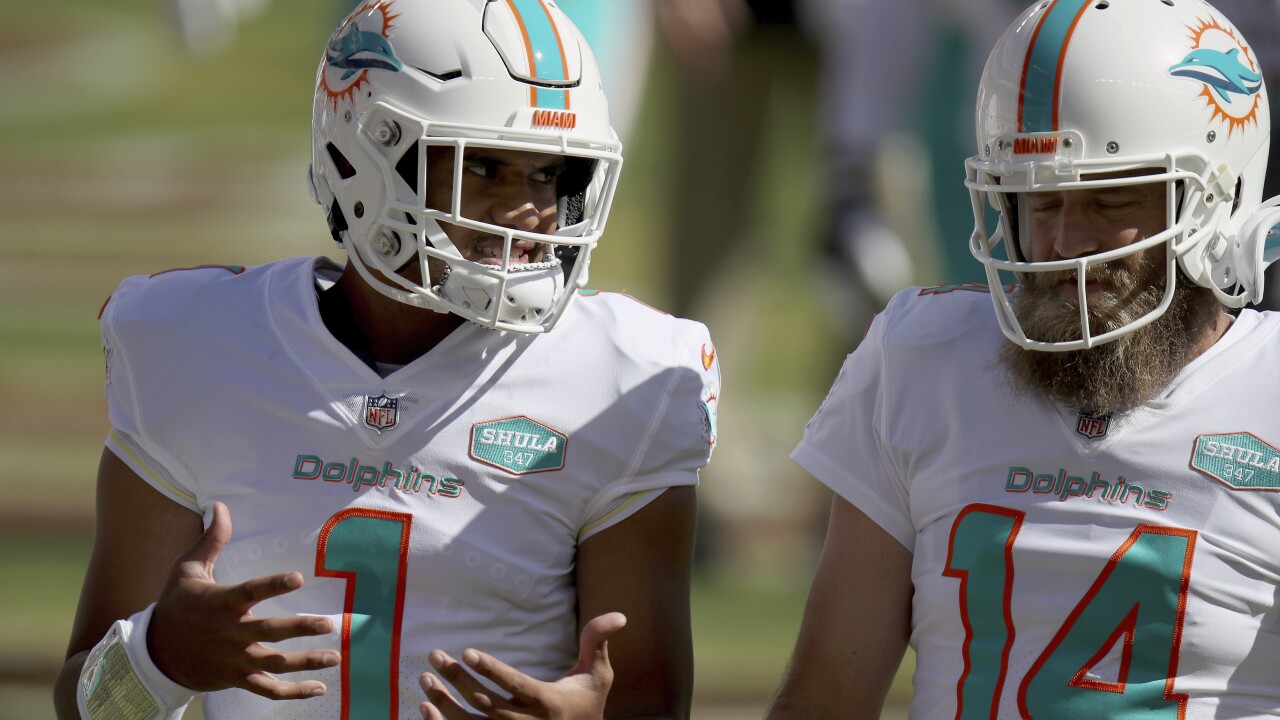 (Copyright 2020 The Associated Press. All rights reserved. This material may not be published, broadcast, rewritten or redistributed.)
Scot Tucker/AP
Miami Dolphins quarterback Tua Tagovailoa (1) and quarterback Ryan Fitzpatrick (14) talk on the field before a game against the San Francisco 49ers, Sunday, Oct. 11, 2020, in Santa Clara, Calif.

MIAMI GARDENS, Fla. — Tua Tagovailoa said he's "excited" to be the new starting quarterback for the Miami Dolphins, though he's sorry it comes at the expense of Ryan Fitzpatrick.

"That's news that I think anyone would love to hear, being named the starter at any position," Tagovailoa told reporters Wednesday, one day after it was announced that he would assume command of the offense after the team's bye week. "But at the same time, I also felt for Fitz as well."

It was only a matter of time before the No. 5 overall pick in this year's draft took over in Miami, though the timing of the decision was surprising.

"We just felt like it was the best move for the team right now," second-year head coach Brian Flores said. "That's how we're going to move forward."

Tagovailoa made his NFL debut in last weekend's 24-0 win over the New York Jets. He completed both of his pass attempts for nine yards in mop-up duty.

Fitzpatrick said he was "shocked" by the announcement, especially considering the Dolphins (3-3) head into the bye week on a two-game winning stream after a 1-3 start.

"It definitely caught me off guard and it was a hard thing for me to hear yesterday," Fitzpatrick admitted. "Just kind of digesting the news, my heart just hurt all day. It was heartbreaking for me."

Fitzpatrick said Flores has always been honest with him about the position and his role as "placeholder," so he knew "it was just a matter of kind of when, not if."

"It still just broke my heart yesterday and it's a tough thing for me to hear and to now have to deal with, but I'm going to do my best with it," Fitzpatrick said.

The move is nothing new for Fitzpatrick, who split time with Josh Rosen as the starter last season before cementing his short-term status. The 16-year veteran's NFL journey has taken him from St. Louis to Cincinnati to Buffalo to Tennessee to Houston and then on to New York and Tampa before joining Miami in 2019.

"I've been benched all kinds of different ways, but this one -- this one just really more so than any of them," he said. "I think this organization and what we've been through the last year and a half, this was kind of the first place, other than Buffalo, where I just felt fully committed and invested and felt like it was my team. And so to have that, I think that's a lot of the reason why my heart was so heavy yesterday. That's a direction that the organization is going and I've just got to accept it."

"He's made an impact on Tua, but also a lot of players on this team, so I have a great respect for him," Flores said. "That made this decision very tough. But at the end of the day, as a team, we felt like the best thing to do for our team, now and moving forward, was to go with Tua. But I think Fitz and the way he handles himself and his impact on the team, I think it will still be there. He's been a tremendous asset and leader on this team."

For now, Tagovailoa will have an ally in Fitzpatrick, and vice versa.

"It's like a father and son," Tagovailoa said of his relationship with Fitzpatrick, who vows to support his younger teammate.

"I've got to do my best for Tua to help him out, because there's two separate situations here," Fitzpatrick said. "One is with Tua, and I want him to do well and I think he's a great kid, and I think he has a really bright future. The other one is my feelings and just kind of what I'm going through, and that has to be separate from when I walk into this building and help him out. I've got to separate those feelings from trying to be a professional and help him out as best I can."