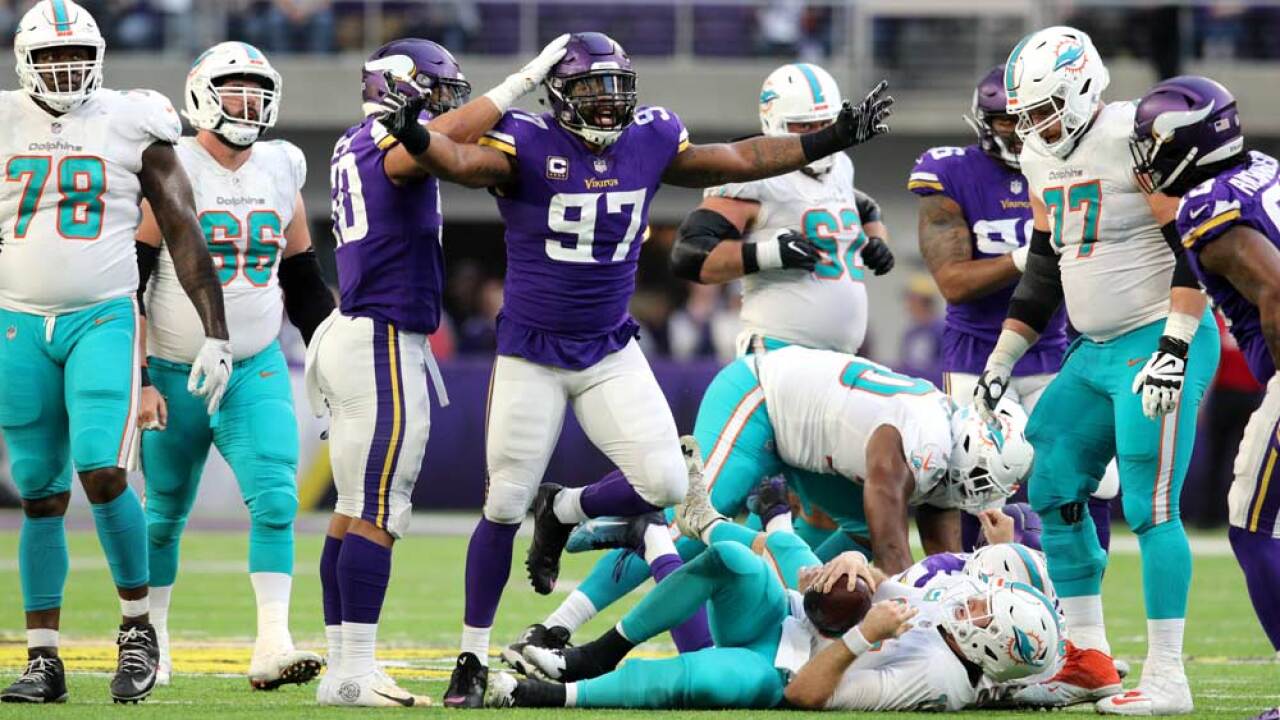 MINNEAPOLIS (AP) — With a new play caller in place, the Minnesota Vikings recommitted to running the ball. And Dalvin Cook proved again his capability, when healthy, of taking over a game.

Cook had a career-high 136 yards and two touchdowns on a season-high 19 carries for the Vikings, who stayed in control of a spot in the playoffs with a 41-17 victory over the Miami Dolphins on Sunday.

"We just wanted to go out there and get back to playing like how we know we can play," Cook said.

Latavius Murray added 68 rushing yards and a score on 15 of the team's season-high 40 attempts. The Vikings (7-6-1) converted each of their first three drives under interim offensive coordinator Kevin Stefanski into touchdowns, using a back-to-the-basics approach to build a big lead and lean on the defense down the stretch.

"He knows the type of guys he has around him," Cook said. "We're going to give it 100 percent every play for him. He dialed it up today."

Anthony Barr and Danielle Hunter each had two of the nine sacks of Ryan Tannehill , totaling 71 lost yards for the Dolphins (7-7). Miami came crashing down from the euphoria of defeating New England with that double-lateral 69-yard score on the final play last week capped by Kenyan Drake's race across the goal line.

Minkah Fitzpatrick returned an interception 50 yards for a touchdown in the second quarter and Kalen Ballage scored on a 75-yard run on the first snap of the second half to bring the Dolphins within 21-17. But on their next five possessions they netted a staggering minus-27 yards on 16 plays.

"We've got to look in the mirror and ask ourselves how we want to finish the season," Drake said.

Tannehill finished 11 for 24 for 108 yards, as the Dolphins took just their fifth loss in the last 17 games he has started and saw their wild-card bid in the AFC take an even bigger hit. Baltimore, Indianapolis and Tennessee all won to move to 8-6 and leave Miami in ninth place in the conference race.

"Obviously, things are out of our control at this point, but we've just got to keep playing," Tannehill said. "Win the games we have left on our schedule, and whatever else happens is out of our hands."

Though Chicago won the NFC North by beating Green Bay, the Vikings moved a critical step closer to returning to the postseason. With enough help, they could clinch the second wild-card spot next week.

Kirk Cousins threw touchdown passes to Stefon Diggs and Aldrick Robinson to make up for the pick-six. He went 14 for 21 for 215 yards for the Vikings, who posted their second-highest score in five years under coach Mike Zimmer.

The Vikings were held under 285 total yards at Seattle last week for the fourth time in their last five games, so Zimmer made a last-ditch move to try to salvage the season by firing first-year offensive coordinator John DeFilippo and promoting Stefanski to replace him. One of Zimmer's public criticisms of DeFilippo in recent weeks had been a lack of consistent commitment to establishing a running attack.

"I think Kevin knew what I wanted," Zimmer said, complimenting Stefanski for acting "calm and collected" throughout the week and during the game.

The spark Zimmer sought was immediate, with the Vikings settling in nicely at home after two rough weeks on the road. They needed only 19 plays, keeping the ball on the ground 12 times, to cross the goal line on each of their first three possessions. Cousins, who has operated out of the shotgun for the majority of the season, was often under center while completing his first eight passes.

"We couldn't stop the run, and they were able to do all their play-actions off of that," a downcast Dolphins coach Adam Gase said. "The last thing we needed to happen was to get behind like that."

With 202 yards, the Vikings gained the highest first-quarter total in the NFL in a season filled with prolific production nearly everywhere. It was their most points in the opening 15 minutes since a 28-point output on Oct. 9, 2011, against Arizona.

Miami gave up 30-plus points for a sixth game this season and 400-plus yards for the ninth time this year.

The special teams were sharp as ever for Minnesota, too, with Dan Bailey making all five of his extra points and both field-goal tries. Marcus Sherels set up one of those kicks with a 70-yard punt return and totaled 116 yards on five returns.

Dolphins: Frank Gore, the NFL's active rushing leader, hurt his left ankle on the second-to-last play of the first quarter and didn't return. ... Fitzpatrick, the first-round pick who was drafted as a safety, started at CB for Xavien Howard for the second straight game. Howard, who entered the week tied for the league lead with seven interceptions, has a knee injury. ... Backup DT Ziggy Hood (hamstring) limped off the field at the end of the third quarter.