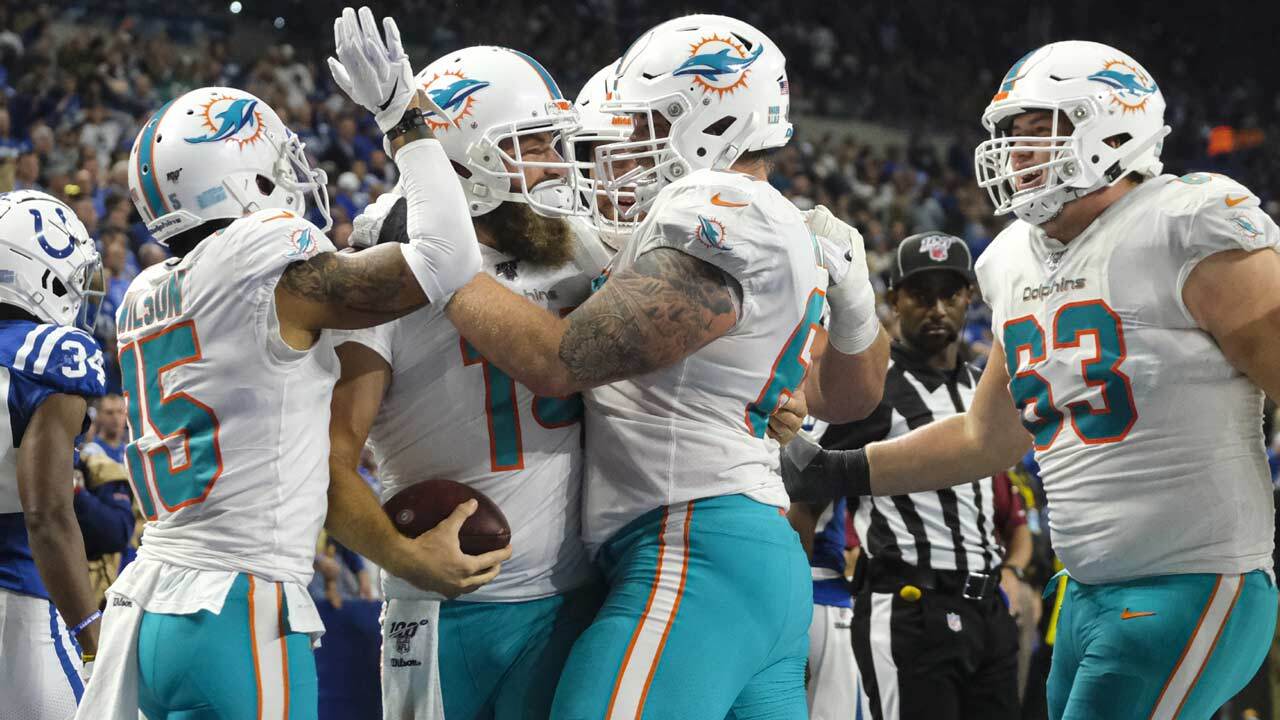 (Copyright 2020 The Associated Press. All rights reserved. This material may not be published, broadcast, rewritten or redistributed.)
(AP Photo/AJ Mast)
Miami Dolphins quarterback Ryan Fitzpatrick (14) is surrounded by teammates as he celebrates a touchdown against the Indianapolis Colts during the first half of an NFL football game in Indianapolis, Sunday, Nov. 10, 2019.

INDIANAPOLIS (AP) — Ryan Fitzpatrick scored on an 11-yard run in the first half and the Miami Dolphins defense made a late stop Sunday to preserve a 16-12 victory over the Indianapolis Colts.

The Dolphins (2-7) have won two straight after a miserable start and earned their first win at Lucas Oil Stadium since 2013.

Indianapolis (5-4) has lost back-to-back regular-season games for the first time since October 2018. With starting quarterback Jacoby Brissett out because of an injured left knee, the Colts offense sputtered. Indy gained just 300 total yards and Brian Hoyer was picked off three times, with Miami scoring 13 points off those turnovers.

Yet, the Colts had four chances to take the lead in the final minute from the Miami 16. Hoyer threw incompletions on the first three plays and hooked up with Eric Ebron for eight yards on fourth-and-10, sealing the decision.

It sure wasn't pretty.

Hoyer's first interception led to a 47-yard field goal by Jason Sanders, and Hoyer's second pick set up the Dolphins' only touchdown — Fitzpatrick scrambled to the right on third down and found a wide open running lane to the end zone for a 10-0 lead.

Indy finally scored on a 25-yard field goal by Adam Vinatieri early in the third quarter and cut the deficit to 10-6 when Vinatieri tied Morten Andersen's league record for field goal attempts on a 39-yarder with 38 seconds left in the third. Vinatieri and Andersen have each attempted 709 career field goals though Vinatieri has made a record 596.

The Colts took their only lead when Hoyer hooked up with Jack Doyle on a 1-yard TD pass early in the fourth. But Vinatieri missed his sixth extra point of the season, leaving the score 12-10.

Dolphins: Fitzpatrick was 21 of 33 with 169 yards, no touchdowns and one interception. ... Kalen Ballage had 20 carries for 43 yards. ... DeVante Parker had five receptions for 69 yards.

Dolphins: Linebacker Jerome Baker left in the second half with what appeared to be an injured right knee and the refs sent Fitzpatrick to the sideline at the start of Miami's final series. Fitzpatrick took a hit to the helmet on the previous series.

Colts: Running back Jordan Wilkins injured his ankle during the third quarter and did not return.

Freeney finished his career as Indianapolis' sacks leader with 107½ and now ranks second, behind former teammate Robert Mathis (123). He was joined by a group of former teammates including Peyton Manning and Edgerrin James as well as Bill Polian — who selected Freeney in the first round of the 2002 draft.

It was a different experience for Freeney.

"Before when I came out of that tunnel, when I was the last out of the tunnel, I had my helmet on, I was ready to go, I was ready to go in and attack somebody," he said. "Well this wasn't attack-mode. This was more like, 'All right Dwight, calm down. Remember what you're going to say.' It was a different feeling. It was a great feeling."

Colts: Will try to win third straight division game this season when Jacksonville visits next Sunday.