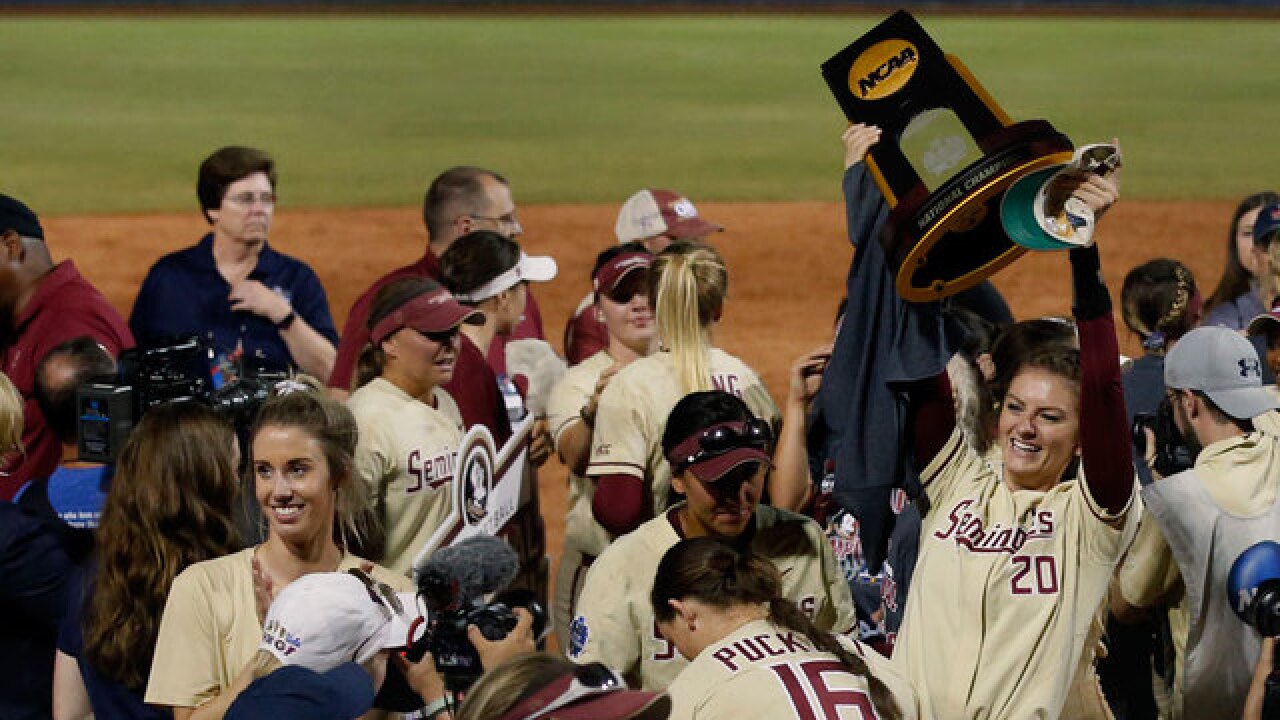 On Monday night, Florida State's star third baseman made perhaps the play of her career, a diving catch and throw for a double play that helped preserve a 1-0 win over Washington in Game 1 of the Women's College World Series championship series.

On Tuesday, the senior did the damage with her bat. She had three hits, including a homer, and Florida State beat Washington 8-3 on Tuesday night to claim its first national title.

Warren, who hit .520 in the World Series, was named most outstanding player. As it all sunk in, tears started to flow.

"I think that's every senior's dream, is to leave with a 'W,' to end their season on a 'W,'" she said. "That was one of the goals. I am so proud of this team. This university has done so much for me. This coaching staff has taken me under their belt as their own child. I came into this program as a kid and I'm leaving it as a strong woman. I wouldn't have wanted it any other way."

The Seminoles (58-12) won the best-of-three championship series 2-0. They lost their opener before winning six straight to become just the third team to come through the losers' bracket and take the title.

Florida State pitcher Meghan King settled down after a rough start to complete a record-setting World Series. She broke the record for lowest ERA (0.20) among pitchers who threw at least 10 innings. She earned four wins and a save in Oklahoma City while allowing just one earned run in 34 1/3 innings. She was on such a run that Florida State's ace throughout the season, Kylee Hanson, never had to pitch in the championship series.

It was the first national title for an Atlantic Coast Conference team.

"These kids took a chance on us and the dream to be here," Florida State coach Lonni Alameda said. "People contact us because they want to play in the national championship game and that's what we want to teach and coach. To be told that you can only be in other conferences — now we've come through and you don't. You can go to the ACC and you can play at different schools. It means so much for the growth of the game."

Washington (52-10), one of four Pac-12 teams to reach the World Series, was undefeated outside the conference until the two losses to Florida State.

"I hope that I can impart that on these women, that for what they were able to do throughout our entire journey, they are champions in how they went about it other than us not having the gold trophy," Washington coach Heather Tarr said.

Washington starter Taran Alvelo was disappointed in her performance. She shut out two-time defending champion Oklahoma in the semifinals to get the Huskies to the championship series, but gave up seven runs and seven hits in 3 1/3 innings on Tuesday before giving way to Gabbie Plain.

"I got emotional (when I went out), because it's the championship series and I felt like I didn't give my seniors the best chance to win that game," Alvelo said. "They did everything for us in the first inning. You learn a lot going through this process."

The Huskies got the only earned run off King early. Taylor Van Zee led off the game with a single, advanced to second on a passed ball and scored on a bunt by Sis Bates. Washington then took advantage of an error, a passed ball and a double after miscommunication to take a 3-0 lead.

Alameda talked to her team during the rough start.

"You eye it up and you kind of look around and you walk in there with a big smile and be like, 'We're the cardiac kids. We need to be down by three in order to perform. We're right where we want to be,'" she said. "So they all kind of laugh."

Anna Shelnutt, who homered on Monday for the game's only run, started the Seminoles' rally with a two-out, two-run homer in the first.

"Thank God, 'Postseason Anna' did it, and here we are," Alameda said.

Florida State got more in the second when Elizabeth Mason singled and two runs scored with help from an error in right field. Warren's RBI single later in the inning pushed the Seminoles' lead to 5-3.

Mason's two-run homer in the fourth made it 7-3, and Warren hit a solo shot in the same inning to make it 8-3.