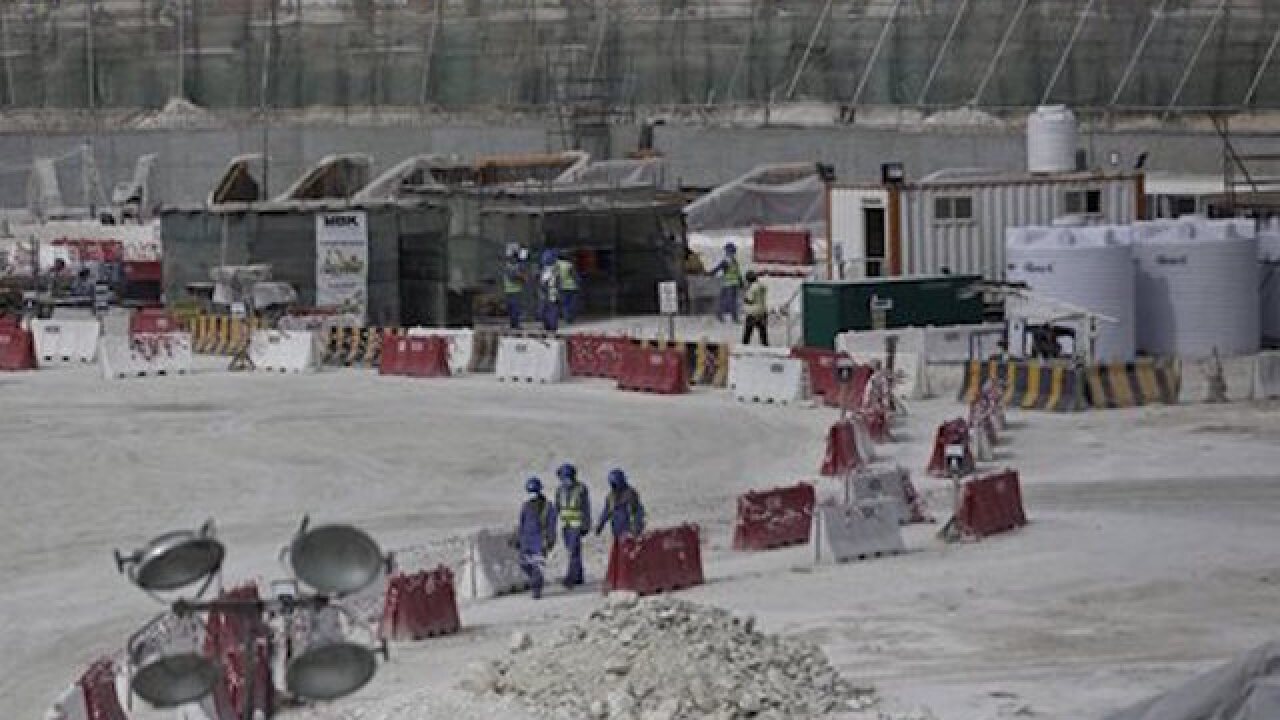 Copyright Associated Press
&lt;p&gt;In this May 4, 2015, file photo taken during a government organized media tour, foreign workers walk between safety barricades at the site of the pitch of the Al-Wakra Stadium that is under construction for the 2022 World Cup in Doha, Qatar. Migrant laborers faced abuse that in some cases amounted to forced labor while working on a stadium that will host soccer matches for the 2022 World Cup in Qatar, a new report released by Amnesty International alleged Thursday, March 31, 2016. (AP Photo/Maya Alleruzzo)&lt;/p&gt;

During his first working visit to Qatar on Friday, FIFA President Gianni Infantino said the group will include "relevant sectors of civil society and other relevant FIFA stakeholders."

Qatar is often criticized by rights groups and trade unions for alleged abuses and deaths on a range of construction projects linked to the 2022 World Cup since it won hosting rights in 2010.

Last week, a FIFA-appointed human rights expert from Harvard University advised that tournaments should be moved from countries where abuses persisted.

"We take our responsibility seriously and are committed to playing our part," Infantino said in a statement published by FIFA.

Amnesty International welcomed "steps in the right direction" announced by the FIFA president, who was elected two months ago.

"Finally, it appears FIFA is waking up to the fact that unless it takes concrete action, the Qatar 2022 World Cup will be built on the blood, sweat and tears of migrant workers," said Mustafa Qadri, a spokesman for Amnesty on migrants rights in the Gulf region.

The gas-rich emirate is expected to spend tens of billions of dollars before the November-December 2022 tournament kicks off, preparing eight new and renovated stadiums and related projects such as transport links and accommodation.

Qatar is relying heavily on construction workers from south Asia who are tied to the "kafala" system of sponsorship common in Gulf nations, which critics say exposes migrants to exploitation.

Harvard professor John Ruggie said last week that FIFA should have gotten assurances from Qatar that the "kafala" system would not be used for any World Cup-related job before bidding even started in 2009.

Though Qatari authorities have promised reforms, progress with new laws has been slow.

"FIFA and I will take the Qatari authorities at their word and I look forward to the concrete actions which will be the real testament of will," Infantino said, adding he was "confident that we are on the right track."

The head of Qatar's organizing committee, Hassan al Thawadi, said the first World Cup in the Middle East would meet all FIFA requirements.

"Crucially, we are also firmly committed to leaving a lasting social legacy after the tournament — including in the area of workers' welfare," Al Thawadi said in the FIFA statement.