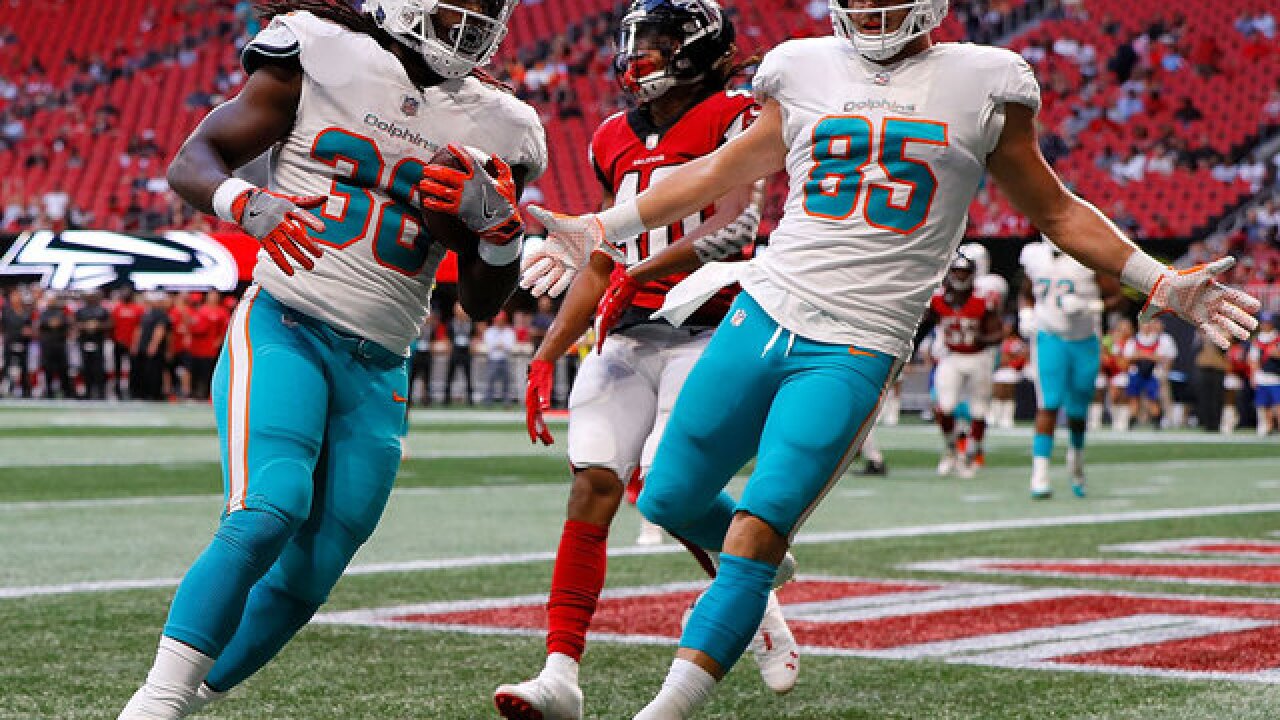 Image copyright 2018 Getty Images. All rights reserved. This material may not be published, broadcast, rewritten, or redistributed.
&lt;p&gt;Buddy Howell #38 of the Miami Dolphins catches a touchdown pass against the Atlanta Falcons at Mercedes-Benz Stadium on August 30, 2018 in Atlanta, Georgia. (Photo by Kevin C. Cox/Getty Images)&lt;/p&gt;

"It's going to be one of those two guys," Gase said after watching Brock Osweiler and David Fales split the playing time in Miami's final preseason game.

Osweiler said he didn't think Gase and his staff would need the preseason game to evaluate his potential as the team's backup.

"I think I've started enough games in this league to be able to see what I'm capable of doing, you know what I mean?" Osweiler said. "I don't think the coaches are going to look at just one game, but you'd have to ask them what they're really trying to look for."

Osweiler completed 16 of 25 passes for 147 yards and two touchdowns for the Dolphins (1-3). He had 25 career starts in 42 games in six seasons with Denver and Houston before signing a one-year deal with Miami.

Fales completed 13 of 20 passes for 94 yards and one interception.

Gase was impressed by the first-half production of the offense, led by Osweiler, Howell and running back Kalen Ballage, who had a 9-yard scoring run. Howell also ran for a touchdown.

"They had a good tempo going," Gase said. "They took advantage of some of the calls versus the coverages they ran. They got some explosive plays. It was good to see."

Each team rested most starters in the final preseason game.

The Falcons (0-4) had little offense with their starters, including quarterback Matt Ryan, running backs Devonta Freeman and Tevin Coleman and wide receiver Julio Jones, watching on the sideline. Atlanta was held to nine first downs and 185 yards.

The Falcons also finished 0-4 in the 2017 preseason before advancing to the playoffs.

Kurt Benkert played most of the game at quarterback and may have lost ground in his effort to win a roster spot behind Ryan and Matt Schaub. He threw two interceptions while completing only 10 of 25 passes for 103 yards.

Benkert's first pass of the second half was intercepted by Jordan Lucason a deflection off the hands of receiver Reggie Davis.

Linebacker Stephone Anthony's interception of Benkert's pass late in the first quarter set up a 1-yard scoring run by Howell.

A rare offensive highlight for Atlanta came late in the first quarter when Benkert completed a short pass to running back Malik Williams, who jumped over Lucas for a 16-yard gain. That possession ended when Williams was stopped on fourth down.

Benkert's 13-yard pass to Devin Gray set up Williams' 8-yard scoring run with 25 seconds remaining in the half.

"That's the big back we were hoping to see when we saw him coming out of Louisville," said Quinn of Williams, an undrafted rookie.

Dolphins WR Rashawn Scott suffered an ankle injury in the first half and did not return.

For Atlanta, Williams and cornerback Blidi Wreh-Wilson left in the second half with shoulder injuries.

Dolphins wide receivers Albert Wilson and Kenny Stills embraced after each took a knee during the national anthem, continuing their protests of social injustice through the preseason. All Falcons players stood during the anthem.

Miami's Jason Sanders, competing with Greg Joseph in a competition of rookies, kicked a 56-yard field goal in the fourth quarter.

Mercedes-Benz Stadium's roof was open for the game. The roof was closed for every game after the Falcons' opener in the 2017 debut for the $1.5 billion stadium. The complicated camera lens-type design on the roof has been fine-tuned and is ready for more action this season.

Dolphins: Miami opens its regular season with a home game against Tennessee on Sept. 9.

Falcons: Atlanta opens its season on Sept. 6 at Philadelphia. The Eagles beat the Falcons in the playoffs on their way to winning the Super Bowl.