Dolphins owner says he was keeping options open on anthem 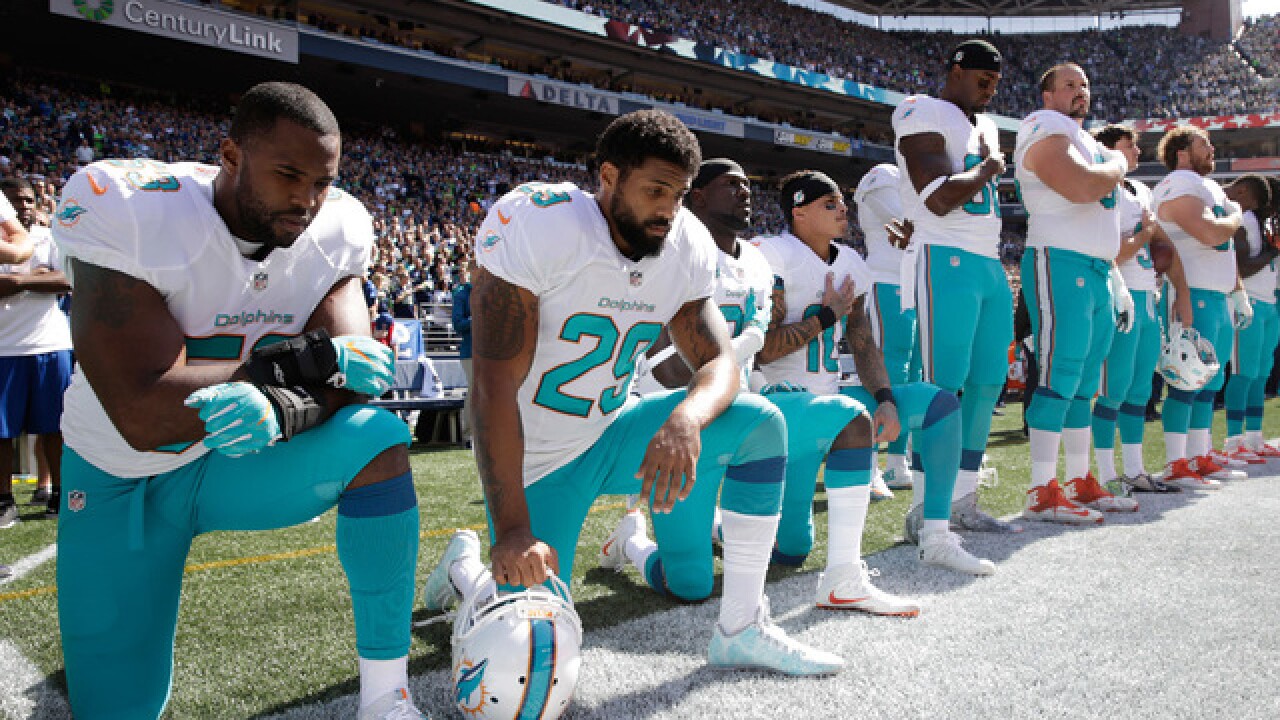 Miami Dolphins owner Stephen Ross said he hadn't decided whether to actually discipline players who protest during the national anthem when he formally told the team that the demonstrations could be punishable.

"We were asked to submit a form to the NFL on our overall discipline policy prior to the start of the rookie report date," Ross said in a statement Friday, explaining why a one-sentence reference to "Proper Anthem Conduct" was included in the team's official discipline policy. "The one line sentence related to the national anthem was a placeholder as we haven't made a decision on what we would do, if anything, at that point."

President Donald Trump, a frequent critic of protesting players, said Friday that players should be suspended for a game for kneeling once, then suspended for the season with no pay if they kneel a second time.

"Isn't it in contract that players must stand at attention, hand on heart? The $40,000,000 Commissioner must now make a stand," Trump tweeted, referring to NFL Commissioner Roger Goodell.

Miami's policy was obtained Thursday by The Associated Press and listed anthem conduct under behavior that could be found "detrimental to the club." It was the final bullet point on Miami's list.

The list contains a wide range of potential violations, including criminal acts, breaking curfew, using or possessing drugs, riding a motorcycle, visiting public places declared off-limits by the club and inappropriate use of tablets and mobile devices. It also says players can be punished for criticizing teammates, officials or NFL executives.

All of the violations carry potential penalties of suspension with or without pay, or fines. The maximum penalty — rarely given by clubs themselves — is a four-game suspension and a fine of another week of pay.

A person familiar with league protocol told The Associated Press on Friday that NFL teams were not required to create any anthem policies when they submitted their annual discipline notices to the league and players. The person spoke on condition of anonymity because details of anthem discussions between the league and players union are private.

The NFL and NFL Players Association said in a joint statement Thursday night that they planned to pause enforcement on league anthem rules while working out a resolution acceptable to players, team owners and the league.

Officials for the league and union declined comment on Friday on how they would chart a path forward with the first preseason game less than two weeks away.

Discord over how players should protest social injustice has put the sport at a difficult crossroads, revealing deep divisions in football itself much like those throughout the United States.

In 2016, then-49ers quarterback Colin Kaepernick began protesting police brutality, social injustice and racial inequality by kneeling during "The Star-Spangled Banner" and the demonstration spread to other players and teams. It became one of the most controversial and sensitive issues in sports.

Trump has led the critics, calling players unpatriotic and even saying NFL owners should fire any player who refused to stand during the anthem. Some players countered that their actions were being misconstrued and that they are seeking social change rather than protesting the anthem itself, the flag or the military.

Trump's criticism led more than 200 players to protest during one weekend, and some kept it up throughout the season.

The NFL rule that was passed in May forbids players from sitting or taking a knee if they are on the field or sidelines during the national anthem, but allowed them to stay in the locker room if they wish. The league left it up to teams on how to punish players. The new league rules were challenged this month in a grievance by the players union.

The league and a coalition of players have been working in tandem to support player initiatives for a variety of social issues. The NFL is committing $90 million over the next seven years to social justice causes in a three-segment plan that involves league players.

Kaepernick didn't play at all last season and still hasn't been picked up by another team. He threw 16 touchdown passes and four interceptions in his final season in 2016. Safety Eric Reid, one of Kaepernick's former teammates and another protest leader, is also out of work.

Both have pending collusion grievances against the NFL.

Reid left The Players Coalition in November because he said founder Malcolm Jenkins excluded Kaepernick from meetings and asked players if they would stop protesting the anthem if the NFL made a charitable donation to causes they support. Jenkins maintained that despite some disagreements, they were fighting for the same cause: changing systematic oppression.