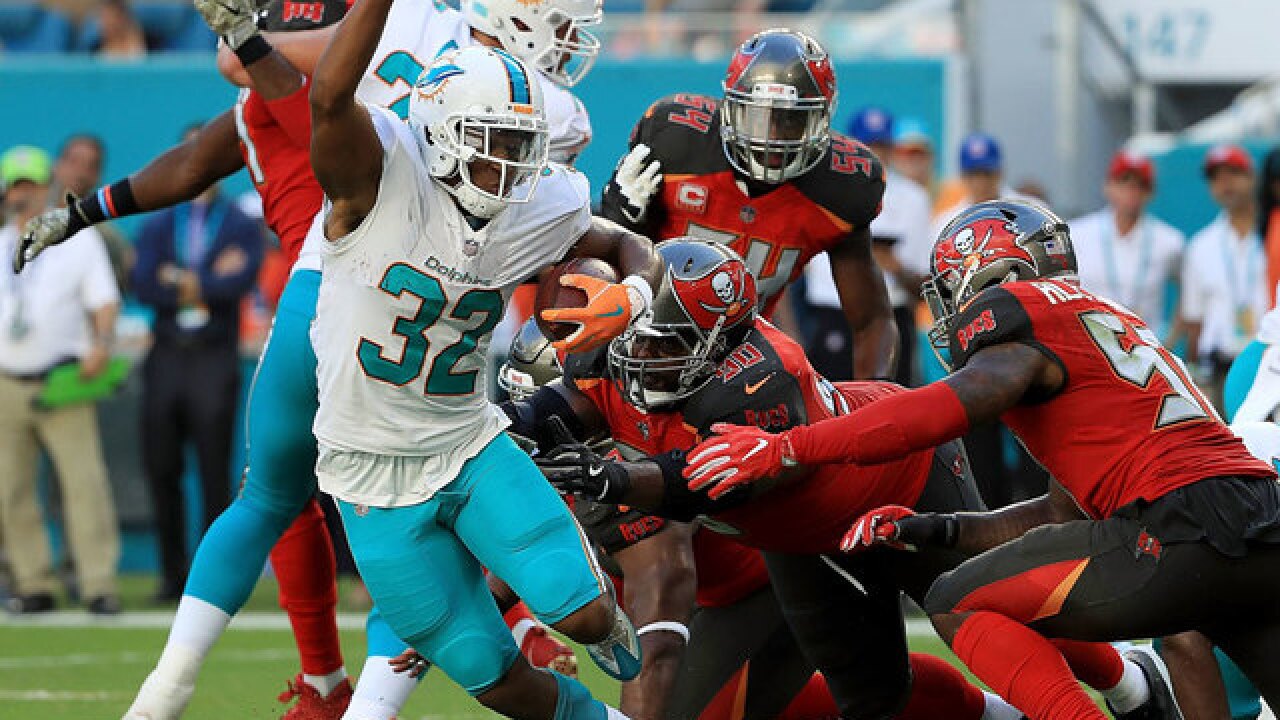 Image copyright 2017 Getty Images. All rights reserved. This material may not be published, broadcast, rewritten, or redistributed.
&lt;p&gt;Kenyan Drake #32 of the Miami Dolphins rushes during the third quarter against the Tampa Bay Buccaneers at Hard Rock Stadium on November 19, 2017 in Miami Gardens, Florida. (Photo by Mike Ehrmann/Getty Images)&lt;/p&gt;

MIAMI GARDENS, Fla. (AP) — Tampa Bay gave up big play after big play. The Buccaneers wasted a 13-point lead. They were an inch or two shy of giving up a safety that probably would have changed everything in the final minutes.

Against the blundering Miami Dolphins, it was good enough.

Ryan Fitzpatrick threw for 275 yards and two touchdowns, Patrick Murray kicked a 35-yard field goal with 4 seconds remaining and the Buccaneers snapped a six-game road slide by topping the penalty-prone Dolphins 30-20 on Sunday.

"That's really all that matters is having more than they've got at the end," Buccaneers coach Dirk Koetter said. "We had a lot of opportunities ... you're always going to have some adversity on the road, we had more than our share today, and at the end of the day when things are going bad you've got to rise up and do something. And we were able to pull it out."

Jay Cutler threw three first-half interceptions and didn't play in the second half because of what the Dolphins said was diagnosed as a concussion. Matt Moore went 17 of 28 for 282 yards and a game-tying touchdown with 3 minutes left, but Miami couldn't overcome five turnovers and 17 penalties — one shy of the franchise all-time record.

"Got to catch the ball, got to hold onto the ball," Dolphins coach Adam Gase said. "Penalties, pre-snap stuff, that's just ridiculous."

Miami (4-6) tied the game at 20-20 on a 61-yard touchdown pass from Moore to Kenny Stills. Fitzpatrick coolly moved the Buccaneers 58 yards on the ensuing drive, and Murray delivered what essentially was the winner.

"I was proud even before we kicked that field goal," Fitzpatrick said. "Everyone knew we were going to get it done."

Adarius Glanton got a bonus touchdown for Tampa Bay (4-6) on the final play, when the Dolphins' lateral-filled last-ditch attempt at a kickoff return turned into a Bucs' score.

"Shouldn't have to win it like that when it's 5-0 in the turnover margin," Koetter said. "But, you know, a win is a win is a win in the NFL and you never apologize for it."

O.J. Howard and DeSean Jackson had touchdown catches for the Buccaneers, who outscored Miami 17-0 in the second quarter to take a 20-7 halftime lead.

"Hats off to them for changing their plan up in the second half and making some plays," said Tampa Bay cornerback Brent Grimes, a former Pro Bowler for the Dolphins. "We made enough to win."

The Bucs also stuffed three straight 1-yard-to-go runs by the Dolphins at the Tampa Bay 34 in the fourth quarter, forcing a turnover on downs on a day when Miami had more mistakes than points.

Stills caught seven passes for 180 yards, and Jarvis Landry had six catches for 95 yards and another touchdown for Miami, which has lost four straight for the first time since 2013 and now faces a steep climb in the playoff chase.

"We understand the position that we're in," Dolphins defensive lineman Ndamukong Suh said. "We knew this was a big game. We made mistakes."

The Dolphins had their three longest passing plays of the season — the 61-yard touchdown pass to Stills, a 49-yarder to Landry and another 45-yard strike to Stills. Before Sunday, Miami's longest pass play was a 36-yard throw from Cutler to Stills against the Jets on Oct. 22. A 69-yard run by Damien Williams on Miami's second snap was also the longest ground gain for the Dolphins this season.

The Dolphins challenged a call late after Fitzpatrick appeared to be tackled in the end zone, a play that would have gotten Miami within 20-15. After review, the ball was spotted just outside the goal line. "Looked like a safety to me," Miami defensive end Cameron Wake said. "But, it wasn't. Moving on."

Buccaneers: RG Evan Smith left in the first half and was diagnosed with a concussion.

Dolphins: Besides Cutler's concussion, the Dolphins lost RG Jermon Bushrod in the third quarter to a left foot injury. LB Chase Allen, who started in place of Rey Maualuga — who was arrested early Saturday in a dispute over a bar tab and quickly waived by the Dolphins — also was evaluated for a concussion in the second half. LB Stephone Anthony had a knee injury, the specifics were not announced.

Buccaneers: Visit Atlanta on Nov. 26, the second game in a three-week stretch of road contests.

Dolphins: Visit New England on Nov. 26, the start of a three-week stretch when Miami will see the Patriots twice.