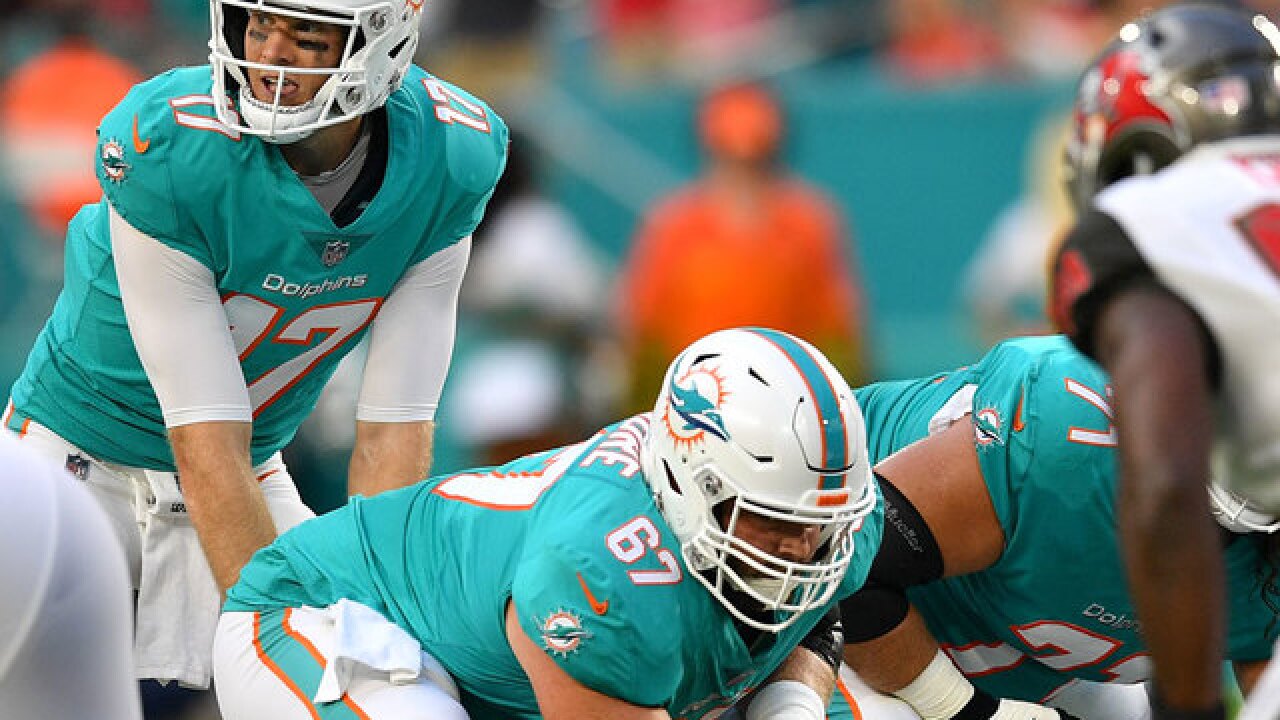 Image copyright 2018 Getty Images. All rights reserved. This material may not be published, broadcast, rewritten, or redistributed.
&lt;p&gt;Ryan Tannehill #17 of the Miami Dolphins calls out the signals in the first quarter during a preseason game against the Tampa Bay Buccaneers at Hard Rock Stadium on August 9, 2018 in Miami, Florida. (Photo by Mark Brown/Getty Images)&lt;/p&gt;

MIAMI GARDENS, Fla. (AP) — Back in a game for the first time in 20 months, Ryan Tannehill had plenty of time to throw Thursday night.

"The protection was awesome," coach Adam Gase said. "He was back there peeling an orange."

An untouched Tannehill completed passes on the first four plays in his return from two serious injuries to his left knee, and the Miami Dolphins lost their exhibition opener to Tampa Bay 26-24.

Tannehill, seeing his first action since December 2016, led a 40-yard drive that ended with a missed field goal in his only series. He was off-target on his final two throws and finished 4 for 6 for 32 yards.

New Buccaneers kicker Chandler Catanzaro made a 26-yard field goal with 23 seconds left to cap a 67-yard drive and give them the win.

Tampa Bay's Jameis Winston played the second quarter against Miami's second team and led a group of reserves to 10 points on drives of 32 and 40 yards. He went 11 for 13 for 102 yards in four series.

"Man, it was just great to play against another team," Winston said. He's suspended for the first three games of the regular season for violating the NFL's personal conduct policy.

Ryan Fitzpatrick led the Bucs on a 57-yard, six-play touchdown drive on their first possession. It was capped by Peyton Barber's 4-yard run.

Miami's David Fales, battling Brock Osweiler for the backup quarterback job, led the second-string offense to a field goal against the Buccaneers' first-team defense. Fales also directed a 75-yard touchdown drive in the second quarter, and he finished 8 of 11 for 115 yards.

Osweiler went 10 for 21 for 83 yards. Gase didn't give either reserve QB an edge in their competition.

Bucs second-round pick Ronald Jones was held to 9 yards in eight carries, but scored on a 2-yard run.

"It was great to see him have the chance to get the game-winner," coach Dirk Koetter said. "The good news is he got that missed extra point out of the way so we don't have to repeat that again. He mishit one, and I know he'll be his worst critic."

Rookie Jason Sanders, battling rookie Greg Joseph for the Dolphins' kicking job, made field goals of 29 and 23 yards but missed a 53-yarder. Joseph made a 48-yarder.

Dolphins receivers Kenny Stills and Albert Wilson and defensive end Robert Quinn protested during the anthem. Stills and Wilson kneeled behind teammates lined up standing along the sideline. Quinn stood and raised his right fist. There were no apparent protests by the Buccaneers.

Stills kneeled during the anthem during the 2016-17 seasons and has been vocal discussing social injustice issues that inspired the protest movement by NFL players.

Bucs: CB Vernon Hargreaves III left in the first quarter with a groin injury and didn't return. ... First-round draft pick DT Vita Vea didn't play. He has missed most of training camp with a calf injury.

Dolphins: Reserve LB Mike Hull left the field on a cart in the second quarter with a left knee injury.