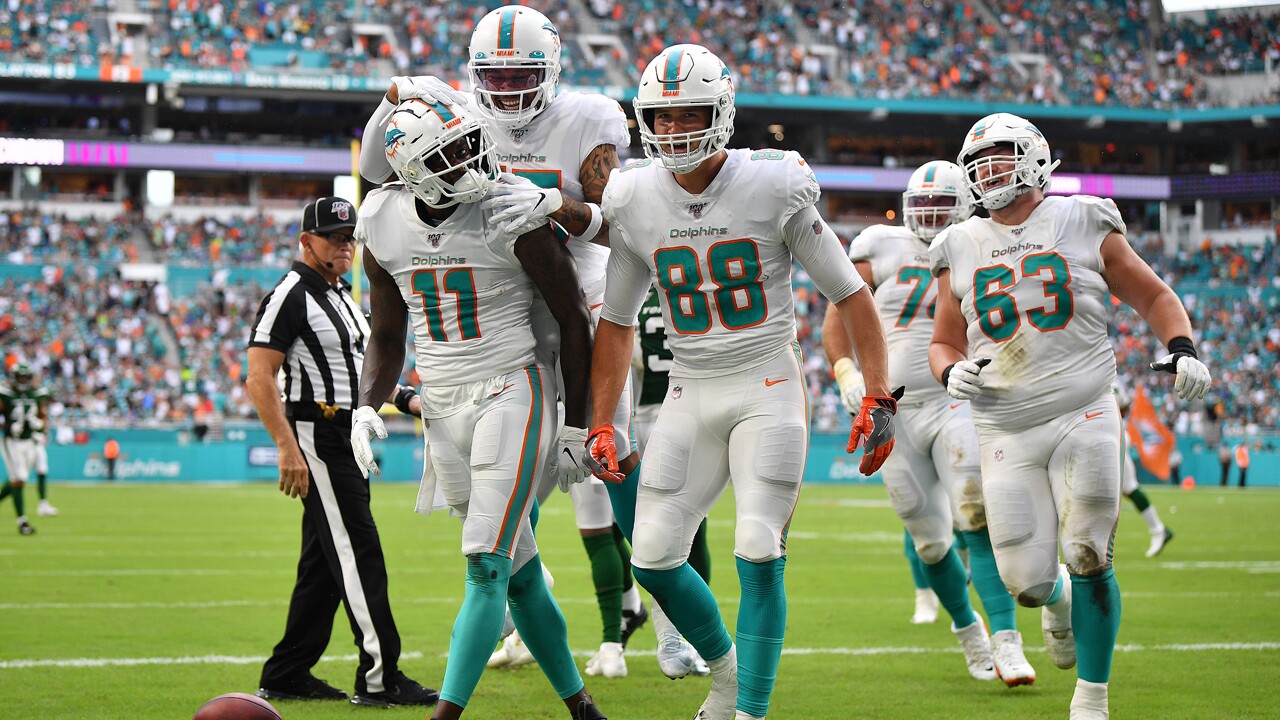 Getty Images
Mark Brown/Getty Images
DeVante Parker #11 of the Miami Dolphins celebrates catching a touchdown against the New York Jets in the second quarter at Hard Rock Stadium on November 03, 2019 in Miami, Florida.

MIAMI GARDENS, Fla. (AP) — Ryan Fitzpatrick threw three touchdown passes, two of them to rookie Preston Williams, and the Miami Dolphins got their first win of the season by beating former coach Adam Gase and the New York Jets 26-18 on Sunday.

The Dolphins avoided what would have been the second 0-8 start in franchise history, joining 2007. The win leaves Cincinnati (0-8) as the NFL's lone winless team this season, and for now the frontrunners to win the No. 1 pick in the 2020 NFL draft.

Fitzpatrick completed 24 of 36 passes for 288 yards, and led the Dolphins to their highest point total of the season. It was also Miami's fourth straight win over the Jets — the first three of those coming with Gase being the coach on the winning side.

Not this time. The Jets went 11 plays on the first drive of the game for a touchdown and a 7-0 lead, and their highlights were few and far between the rest of the day. The Jets (1-7) actually fell below Miami in the AFC East standings based on the head-to-head tiebreaker.

It was the Dolphins' first win since the "Miami Miracle" over New England last season — which was followed by three straight losses to end 2018, making this a 10-game losing streak in all.

No miracle was required this time.

New York's fate was largely sealed with 6:29 left, when a shotgun snap sailed right of quarterback Sam Darnold and wound up bouncing out of the back of the end zone for a safety and a 26-15 Miami lead. The Jets got a field goal with 15 seconds left to close within eight, but Miami recovered the ensuing onside kick and could finally start to celebrate.

Darnold was 27 of 39 for 260 yards and a touchdown to Jamison Crowder, who finished with eight catches for 83 yards.

Fitzpatrick's TD throws to Williams went for 12 and 5 yards, and DeVante Parker caught a 17-yard scoring pass. All three came in the second quarter, as Miami turned the 7-0 deficit into a 21-7 lead.

As would be expected between teams with a combined 1-13 record entering the day, there were moments of ineptitude — the Jets had a 3rd-and-27 in the first half, a couple of plays before the Dolphins faced a 1st-and-18.

But the last minute of the half, which wound up taking nearly 20 minutes in real time, was filled with the real wackiness.

The Jets appeared to cut Miami's lead to 21-13 with a PAT pending when Darnold connected with Ryan Griffin for a 2-yard touchdown, one that was overturned after a long review because officials ruled that the tight end didn't have full control of the ball when he skidded to a stop out of the back of the end zone.

Darnold was intercepted by Miami's Jomal Wiltz on the next play, giving the Dolphins the ball on their own 1. Fitzpatrick appeared to bobble the first-down snap, the play — after another review — became a safety for the Jets, and New York made it 21-12 at the half by turning the ensuing possession into a career-best 52-yard field goal by Sam Ficken.

Jets: Ty Montgomery was shaken up in the first quarter as he ran into Dolphins punter Matt Haack. Defensive lineman Steve McLendon injured a shoulder during the second half, and safety Jamal Adams was being evaluated late for a possible head injury.

Dolphins: Williams, the Dolphins' breakthrough rookie this season, got hurt twice — first his right wrist in the third quarter, and then a knee in the fourth quarter. He returned from the wrist injury quickly, but was taken off the sideline on a cart after the knee injury.

Dolphins tight end Mike Gesicki was targeted six times and made six catches for 95 yards — both of those being career highs.

The Dolphins led for the final 36 minutes, 14 seconds. Entering Sunday, they had led for a total of 3 minutes, 46 seconds in their first four home games of 2019 combined.

Jets: Host the other regular inhabitant of MetLife Stadium, the New York Giants, next Sunday.

Dolphins: Visit Indianapolis next Sunday, playing on the Colts' field for the second straight year.