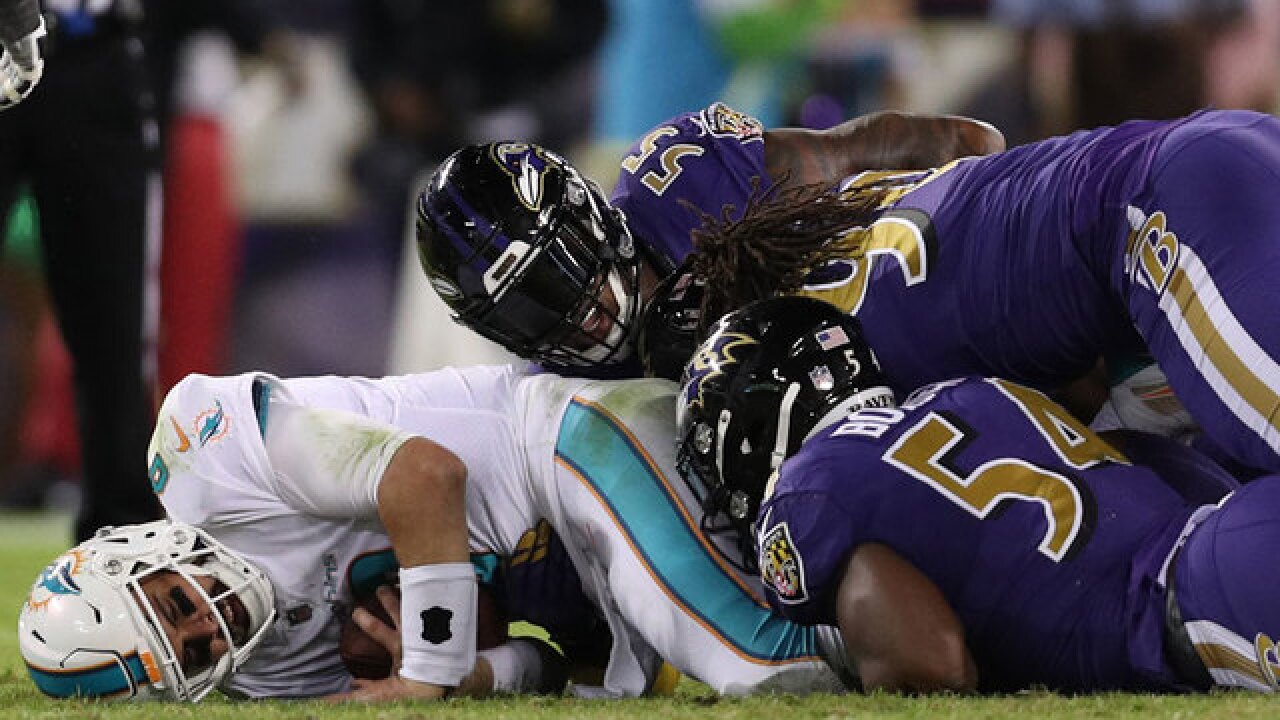 Image copyright 2017 Getty Images. All rights reserved. This material may not be published, broadcast, rewritten, or redistributed.
&lt;p&gt;Outside Linebacker Terrell Suggs #55 of the Baltimore Ravens sacks quarterback Matt Moore #8 of the Miami Dolphins in the fourth quarter at M&amp;T Bank Stadium on October 26, 2017 in Baltimore, Maryland. (Photo by Patrick Smith/Getty Images)&lt;/p&gt;

BALTIMORE (AP) — Baltimore Ravens quarterback Joe Flacco was dazed and bleeding as he was helped off the field.

Diagnosed with a concussion after absorbing a late hit by Miami linebacker Kiko Alonso late in the second quarter, Flacco was taken to the locker room and did not return.

Fortunately for the Ravens, they didn't need him in a 40-0 rout of the Dolphins on Thursday night.

Alex Collins ran for a career-high 113 yards, and Baltimore (4-4) returned two interceptions for touchdowns in the most lopsided shutout in franchise history.

In the midst of one of his best performances of the season, Flacco was hit high by Alonso while sliding at the end of an impromptu run. Flacco's helmet flew off his head, and the 10-year quarterback appeared wobbly as he struggled to his feet.

Alonso was flagged for unnecessary roughness, providing Baltimore with a first down that ultimately turned into a touchdown.

Flacco was initially placed in concussion protocol, and by halftime was ruled out.

"Joe had a concussion and a cut ear," coach John Harbaugh said. "They were stitching it up without any anesthesia, so he's a tough dude. That's as much as I know."

After losing four of five to fall under .500 for the first time this season, the Ravens put it all together with a showing that included a 63-yard interception return by C.J. Mosley and a 50-yard pick-six by Jimmy Smith.

The Dolphins (4-3) came in with a three-game winning streak after rallying from 17- and 14-point deficits in the previous two weeks. There would be no comeback in this one, not against a swarming Baltimore defense that limited Miami to 196 yards.

Matt Moore was making his first start of the season, for an injured Jay Cutler. Four days earlier, Moore engineered a victory over the Jets after Cutler left with fractured ribs.

In this one, Moore completed 25 of 44 passes for 176 yards. He was sacked three times, and both his interceptions turned into scores for Baltimore.

Moore received little backing from the running game, which generated only 45 yards against the 32nd-ranked rushing defense in the NFL.

"It was inept. We're not doing anything," Miami coach Adam Gase said.

Baltimore went up 7-0 when Maclin slipped behind Bobby McCain and Nate Allen to haul in Flacco's perfect pass on the right sideline.

Justin Tucker added field goals of 55 and 48 yards in the second quarter. After Cody Parkey missed from 50 yards for the Dolphins — his first misfire in nine tries this season — Flacco began the drive that would end in the end zone without him.

The late hit by Alonso gave Baltimore a first down at the Miami 5. Three plays later, Ryan Mallett threw a 2-yard TD pass to Benjamin Watson.

Mosley iced it with 14:15 left when he snared a poor throw by Moore near the line of scrimmage and turned it into his first career interception return for a touchdown.

As the Ravens were closing in on another score, a few players exchanged shoves and punches before Chris Moore pounced on a fumble in the end zone.

Overseeing an offense focused on protecting a sizable lead, Mallett went 3 for 7 for 20 yards.

A cat ran onto the field in the fourth quarter, providing some amusement after the game had lost all suspense.

The feline reached the Miami sideline and skipped around a bit before running out of sight.

Dolphins: Allen hurt his calf in the second quarter and did not return.

Ravens: TE Vince Mayle was placed in concussion protocol in the second quarter. ... LT Ronnie Stanley hurt his shoulder in the third quarter but returned to action.

Dolphins: Miami plays the second of three straight night games, this one at home against Oakland on Nov. 5.

Ravens: Baltimore faces Tennessee on the road on Nov. 5, the first meeting between the teams since 2014.