'I've always known since I was a little boy that race was a factor,' Flores says 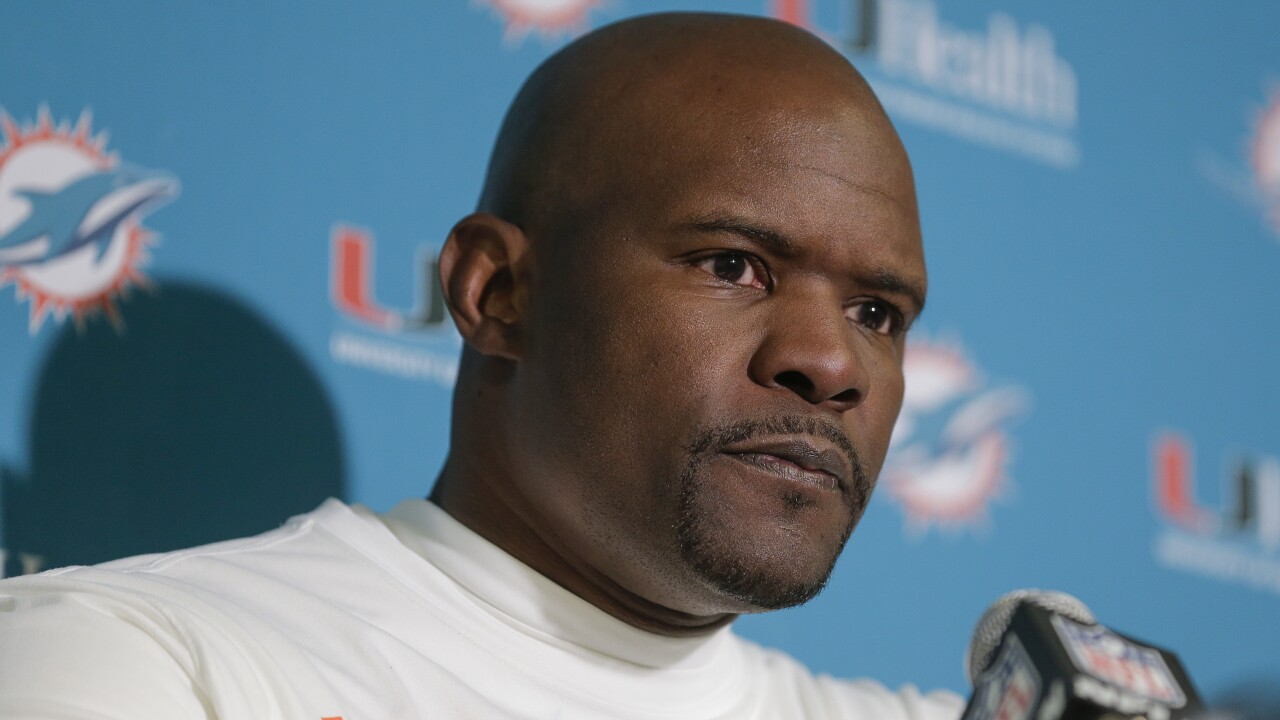 (Copyright 2020 The Associated Press. All rights reserved. This material may not be published, broadcast, rewritten or redistributed.)
Seth Wenig/AP
Miami Dolphins head coach Brian Flores answers questions during a news conference after a game against the New York Jets, Sunday, Dec. 8, 2019, in East Rutherford, N.J.

MIAMI GARDENS, Fla. — Miami Dolphins head coach Brian Flores said Thursday that a "good friend" of his was killed while protesting after the death of George Floyd, which is why he has "some fear" about his players doing the same.

Still, though, the first full-time black coach in team history supports their right to protest -- on one condition.

"I want my players to be careful," he told the media during a Zoom video conference.

That's because of something very personal that happened last weekend during a protest for racial equality in Indianapolis. His friend and former Indiana University football player, Chris Beaty, was shot and killed Saturday night amid violent protests in the city.

"He actually played football with Lance Bennett, who is on our staff," Flores said. "He was full of life. He was a great human being and he was protesting in Indianapolis and he was murdered last weekend."

"I guess to me, that was the first thing that kind of came to mind when Kavon was protesting," Flores admitted. "I've had a lot of conversations with players over the last few days and I support these guys. I understand the emotions that they're going through. But at the same time, I want them to be smart. I care about each one of these guys. I had a situation hit home pretty closely for me, so there's some fear on my end, to be honest with you."

Frazier, who spent the last four seasons with the Cowboys, recently shared on Twitter an encounter he had with police as a child.

Let me tell y’all a quick story for those that don’t understand what’s going on right now. Years ago, when I was about 10 years old my mom and I decided to go to Meijer (a local grocery story for those who don’t know). Before we went inside my mom saw a old friend and... (1/4)

she started to talk about how great God is. A few minutes later 3-4 cops pulled up on us and grabbed me and pushed me face forward into the brick wall. They said i fit the description of a guy who had a gun. As a 10 year old, and not having went through anything like this...(2/4)

before, I was very afraid. While I was scared to go to jail, my mom was scared for my life, because she knew how black people are treated. All I can remember is my mom confused, yelling from the top of her lungs telling me don’t move, don’t talk,and do exactly what they say.(3/4)

As I look back I realize that I could have been a victim of police brutality that day. I was one wrong move from being one of these hashtags. This isn’t new, this have been going on for a very long time and it’s time for a change.

It's an experience to which Flores, who grew up in the Brownsville section of Brooklyn to Honduran parents, can relate.

"I've always known since I was a little boy that race was a factor," he said. "I would say that the -- I mean, I've always known. Again, I can go into personal stories and say this or that, but I'm going to go back to my original point: this isn't really about me. It's about what's happening in this country and again, I think we have a situation here where we can actually make some change. It's not often that there is 100% agreement across the board that changes need to occur. Rather than talking about me and my personal situation, let's put the focus on that and hopefully we'll make some progress."