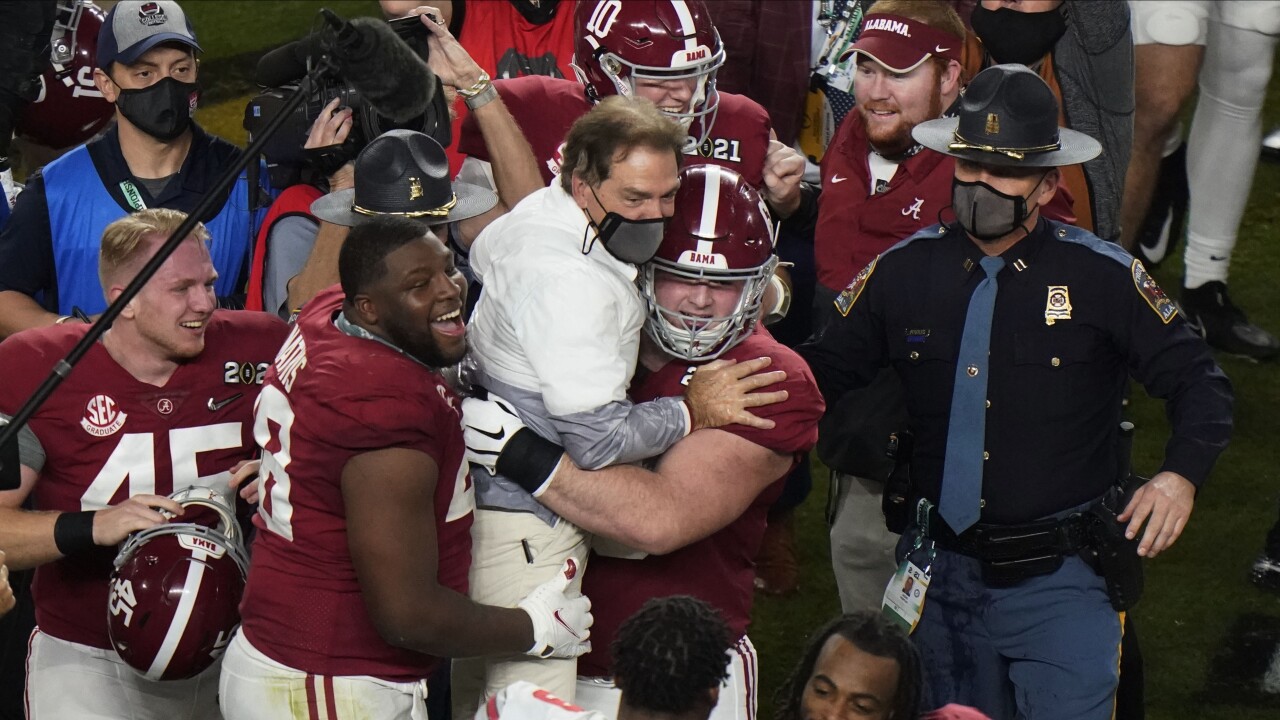 His seven overall titles are enough to cement his legacy as arguably the greatest college coach of all-time.

But don't tell that to Saban.

"I think coach Bryant is sort of in a class of his own in terms of what he was able to accomplish, what his record is, the longevity that he had and the tradition he established," Saban told reporters after the game. "If it wasn't for coach Bryant, we would never be able to do what we did. I mean, he's the one that made Alabama and the tradition at Alabama a place where lots of players wanted to come. We've been able to build on that with great support."

Jones, who finished third in Heisman voting, was less modest, emphatically proclaiming Saban as the greatest coach in the history of the game.

"Of course he is," Jones said. "How could he not be? He does it the right way. He recruits well, but more importantly develops great players and young men. I'm just so blessed that he gave me a chance to come here along with all my teammates. I wouldn't trade it for anything. He's the greatest to ever do it. He'll be the greatest for a long time."

A pandemic-reduced crowd of 14,926 was on hand to witness Saban's most recent championship, courtesy of Alabama's star-studded offense, led by All-Americans Jones, Smith and running back Najee Harris.

Smith caught 12 passes for 215 yards to go along with his trifecta of scores in the first half, while Jones was nearly flawless, completing 36 of 45 attempts with no interceptions.

After Ohio State (7-1) went three-and-out on its first series, Alabama (13-0) seemed to march down the field with ease, with Jones distributing the ball between Harris, Smith, and fellow receivers Jaylen Waddle, Slade Bolden and John Metchie III.

Waddle made his first appearance since Oct. 24, hauling in a 15-yard catch from Jones on third-and-three to give the Crimson Tide a first down. Waddle, who suffered a broken ankle earlier this season, seemed to limp back to the sideline after the play, although he would return in the third quarter.

Harris then scored a 1-yard touchdown on fourth-and-goal.

But the Buckeyes answered when quarterback Justin Fields connected with Jeremy Ruckert, whose one-handed grab for 36 yards set up an 8-yard touchdown run by Master Teague to even the score.

Smith put the Tide back on top with his 5-yard touchdown reception on the first play of the second quarter.

Alabama appeared poised to score again, but the Buckeyes recovered a fumble by Jones and benefitted from a pass interference call in the end zone. Teague scored his second touchdown of the evening on a 4-yard run on the very next play.

The Tide pulled ahead 21-14 with nine minutes remaining in the half on Jones' 26-yard touchdown pass to Harris.

Ohio State had a chance to tie it once again after a targeting call by Alabama safety Jordan Battle gave the Buckeyes a fresh set of downs at the Alabama 8-yard line, but they had to settle for a 24-yard field goal by Jake Seibert to cut the score to 21-17.

That's when Smith took over.

The offensive player of the game scored on each of Alabama's next two possessions to pull ahead 35-17 before the break.

"Well, we had a mission," Smith said. "Everybody wanted to end things the right way. We just all came to work every day and just put in the work. We got the result that we wanted."

Alabama chipped away at the clock on the opening drive of the second half, padding the score with a 20-yard field goal by Will Reichard to cap a 16-play, 75-yard drive that took 7:13.

Ohio State's lone touchdown of the quarter was a 20-yard touchdown pass from Fields to Garrett Wilson.

Harris scored his second touchdown of the evening -- and Alabama's last -- in the fourth quarter to finish off the Buckeyes.

Fields wasn't able to replicate his record-setting performance in the Sugar Bowl, finishing the night 17 of 33 for 194 yards and a touchdown.

"I felt pretty good coming into the game," he said after the loss. "We had a good game plan planned out, but they executed better than we did."