No. 1 Clemson, Trevor Lawrence-less Tigers travel to No. 4 Notre Dame for first time since 1979 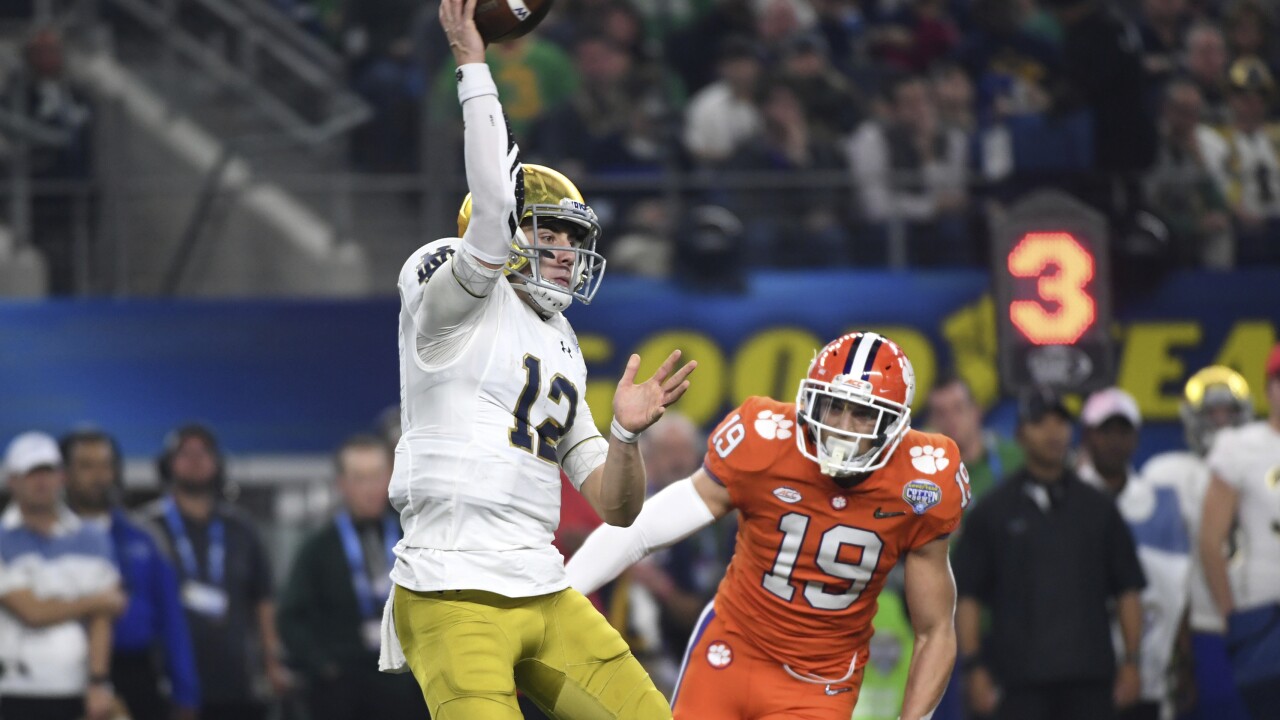 (Copyright 2020 The Associated Press. All rights reserved. This material may not be published, broadcast, rewritten or redistributed.)
Jeffrey McWhorter/AP
Notre Dame quarterback Ian Book throws a pass under pressure from Clemson safety Tanner Muse during the College Football Playoff semifinal at the Cotton Bowl, Saturday, Dec. 29, 2018, in Arlington, Texas.

WEST PALM BEACH, Fla. — It's official. When Clemson travels to Notre Dame Stadium this Saturday night for the first time since 1979, it will be a top five showdown between a pair of undefeated teams.

Clemson remained the top-ranked team in the latest Associated Press poll released Sunday after a first-half scare from Boston College, while No. 4 Notre Dame held onto its spot after a 31-13 victory over Georgia Tech.

It's no surprise, then, that ESPN's popular traveling pregame show, "College GameDay," will be at Notre Dame Stadium to spotlight the game of the weekend.

The winner of Saturday night's game between the Fighting Irish (6-0, 5-0 Atlantic Coast Conference) and the Tigers (7-0, 6-0 ACC) will have a decided advantage in the conference championship chase.

Just that alone seems unfamiliar when it comes to Notre Dame, which is playing a conference schedule for the first time in program history because of the uncertainty of the season surrounding the coronavirus pandemic. The Irish, who compete in the ACC in all sports but football, are eligible to play for the conference championship and automatic berth in the Orange Bowl.

But even more could be at stake as both teams are also vying for one of the four College Football Playoff berths.

The Irish, who are 39-6 over the past three seasons, last faced Clemson in the College Football Playoff semifinal game at the 2018 Cotton Bowl. Clemson quarterback Trevor Lawrence lit up the Irish en route to his team's 30-3 victory, throwing for 327 yards and three touchdowns.

Notre Dame quarterback Ian Book was on the opposite sideline as the Tigers held the Irish to a single field goal. Book attempted as many passes that game (34) as he threw touchdowns last season.

While Book will get a chance at redemption against the Tigers, Lawrence won't play after testing positive for COVID-19 last week. In his place will be freshman quarterback D.J. Uiagalelei, who accounted for 367 yards and three touchdowns in a 34-28 comeback win over Boston College in his first career start.

Now he'll have to lead his team into a hostile road environment for the first time.

Clemson defeated the Irish 16-10 on its last trip to Notre Dame Stadium in 1979.

Saturday's Clemson-Notre Dame game can be seen at 7:30 p.m. on WPTV.