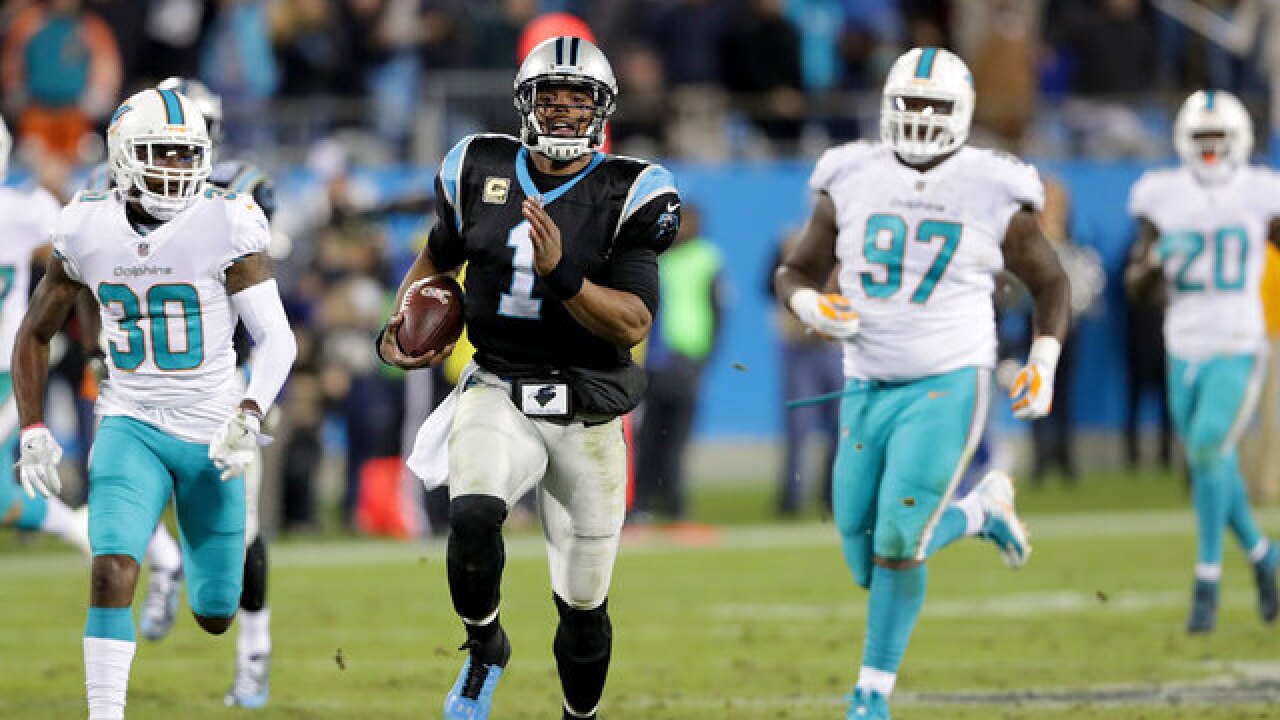 Image copyright 2017 Getty Images. All rights reserved. This material may not be published, broadcast, rewritten, or redistributed.
&lt;p&gt;Cam Newton #1 of the Carolina Panthers runs with the ball against the Miami Dolphins during their game at Bank of America Stadium on November 13, 2017 in Charlotte, North Carolina. (Photo by Streeter Lecka/Getty Images)&lt;/p&gt;

CHARLOTTE, N.C. (AP) — Cam Newton was tired of the Carolina Panthers' defense getting all of the glory.

Newton took it as a challenge when the defense vaulted to the league's No. 1 ranking last week, saying it was time for the offense to strive to match them.

Newton did his part on Monday night, throwing for 254 yards and four touchdowns and running for 95 more as the Panthers piled up a franchise-record 548 yards in a 45-21 rout of the Miami Dolphins.

"It's nice to see them have this type of breakout game," Panthers coach Ron Rivera said of the offense, which had 30 first downs and converted 11 of 14 third downs.

Said Newton: "I still feel like we are scratching the surface of our potential in this offense. We have to trust in our ability to execute our coach's plan."

Newton improved to 5-1 in Monday night games, while averaging 270.5 yards per game with 15 touchdowns and four interceptions.

"There is something about this stage with him," Rivera said. "He played a tremendous game."

Jonathan Stewart ran for a season-high 110 yards, and Newton had a 69-yard jaunt on a read option as the Panthers racked up 294 yards on the ground. It was Stewart's first 100-yard game since last December at Washington.

Rookie Christian McCaffrey scored touchdowns rushing and receiving, and Devin Funchess caught five passes for 92 yards and two touchdowns as the Panthers (7-3) remained a half-game behind the NFC South-leading Saints heading into their bye week.

Newton had his share of fun on the field.

After being tackled on his 69-yard run, an exhausted Newton laid on the ground smiling and shaking his body as if trying to get feeling back into his legs.

Teammates joked with Newton that backup quarterback Derek Anderson could have scored on the play.

"When you ain't got no gas left and your check engine light is on and blinking, get gas at the next stop or so, man, you just have to try to celebrate when you can celebrate, brother," Newton said. "I was just hoping coach didn't come back with another run play for me."

He tiredly handed off on the next two plays.

"Everything was fun out there," said Funchess, who became the team's No. 1 receiver when Kelvin Benjamin was traded to Buffalo two weeks ago.

Jay Cutler had 213 yards passing with two touchdowns and one interception for the Dolphins (4-5), who have lost three straight. Jarvis Landry and Julian Thomas both caught TD passes for Miami.

The game turned with 41 seconds left in the first half, when Luke Kuechly made a leaping interception along the sideline with Carolina leading 10-7.

Four plays later, Newton connected with tight end Ed Dickson on a 7-yard touchdown pass. That opened the floodgates as the Panthers scored touchdowns on five straight possessions in their most explosive output of the season.

"In an eight-minute span, the game got away from us," Dolphins coach Adam Gase said. "It snowballed. We couldn't prevent the big runs once they got going."

The Panthers had entered the game 21st in the league in total offense and 24th in scoring.

"We get to watch them — that's the fun part," Kuechly said of the offense.

It was a big game for Stewart, who fumbled twice in last week's 20-17 win over the Atlanta Falcons.

"He might have been playing with a chip on his shoulder, but we just wanted to get him to that second level," Panthers offensive tackle Matt Kalil said.

The Dolphins have put themselves in a difficult situation in a tight AFC playoff race.

"There are pieces in the locker room. I truly believe that," Cutler said.

The Panthers gave McCaffrey the start at running back over Stewart, who fumbled twice last week against the Falcons. McCaffrey didn't let them down, combining for 50 yards and two scores, including a nifty 4-yard touchdown run where he faked out two Miami defenders.

Dolphins safety T.J. McDonald returned to the starting lineup after serving an eight-game suspension for violating the league's substance abuse policy, but it didn't help the struggling Dolphins defense.

Kenyan Drake provided the big play for the Dolphins, breaking free for a 66-yard touchdown run in the third quarter.

Newton passed Dan Marino for the third-most total yards (passing and rushing) in a quarterback's first seven seasons. Newton trails only Peyton Manning and Matt Ryan in that category.

Panthers: Rookie wide receiver Curtis Samuel left the game in the third quarter with an ankle injury after dropping a would-be touchdown pass in the end zone. ... Center Tyler Larsen suffered a foot injury but returned to the game.

Dolphins: Host the Buccaneers on Sunday in a game that was rescheduled from Week 1 because of Hurricane Irma.

Panthers: Visit the Jets on Nov. 26 after a bye.