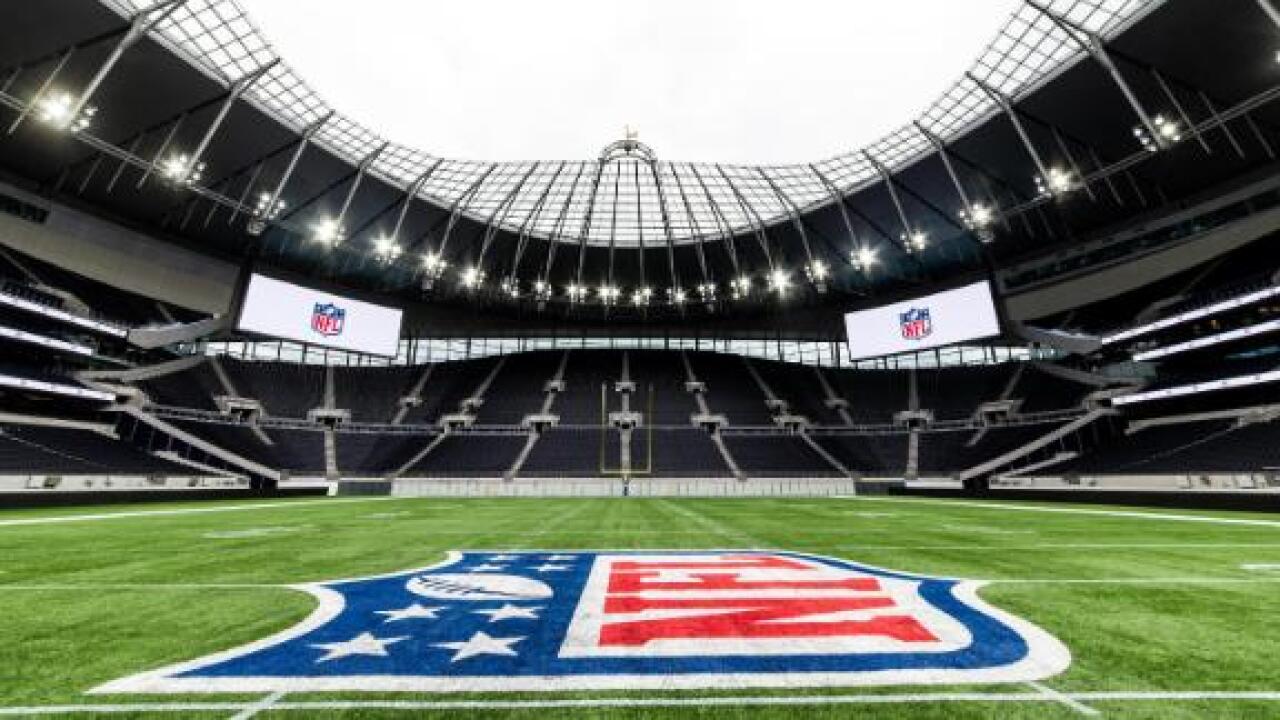 (CNN) -- The Patriots have been the NFL's best team heading into week five, but with a ho-hum game against the 0-4 Washington Redskins this week, football fans will be looking elsewhere -- like London -- for some action.

Here are three things to watch for this NFL Sunday:

The Bears and Raiders will face off on Sunday at Tottenham Hotspur Stadium in London. It's the first NFL game to ever be played there.

NFL football even has made some futbol converts, with soccer players like Tottenham's Harry Kane testing out their abilities with the pigskin. But the event gives NFL players a chance to experience British culture and sport. (Remember when the 2011 Chicago Bears tried their hand at cricket?)

Speaking of the Bears, they return to London for the first time since 2011, while the Raiders are back after losing to the Seattle Seahawks last year.

"We actually like playing on the road...we get a chance to play two home games in foreign countries before October ... we're kind of like the Rolling Stones, if you know what I mean," said Raiders coach Jon Gruden.

The matchup is an intriguing one. There's the bad taste leftover from the Khalil Mack saga, when the Bears star defensive player was traded from the Raiders after Mack and Gruden failed to come to an agreement on the pass rusher's contract. Mack's star status and potential revenge game earned him a display in London's NFL shop, though as NBC's JJ Stankevitz pointed out, Mack and Raiders quarterback Derek Carr are playing out of position.

Mack, a defensive player, is catching a pass while the Oakland signal-caller attempts a tackle. However, Carr has thrown three interceptions this year, so it's possible the tough Chicago defense could force another.

Meanwhile, the Raiders are without Vontaze Burfict on defense, after the linebacker was suspended for the season after a helmet-to-helmet hit.

No word yet on a Super Bowl across the pond. In 2017, NFL commissioner Roger Goodell said he was interested in the idea.

2. Cowboys and Packers hope to get back on track

The Dallas Cowboys and Green Bay Packers started the season on a hot note, as the two squads each went undefeated in their first three games. But in week four, the Packers lost to the Philadelphia Eagles after a late interception thrown by quarterback Aaron Rodgers, and the Cowboys suffered an indignity by losing to the Drew Brees-less New Orleans Saints.

The Packers stumble is understandable, as Green Bay is adjusting to a new head coach Matt LaFleur. However, LaFleur's play-calling came under question after failing to convert from the 1-yard line versus the Eagles in Week 4. But LaFleur's quarterback is supportive, and Rodgers said he agreed with the Packers head man: "I felt good about all four calls ... I felt like we were close on a couple of those to scoring and tying it up."

On the other sideline, the Cowboys adjusted and are looking forward to the matchup. For tight end Jason Witten, who came out of retirement to play this season, playing the Packers means fond memories, as he recorded his first 100-yard receiving game against the Packers in 2004.

Witten told reporters he's not worried about the Cowboys ability to bounce back: "One of the things I like about this team is the ability, each week, to come in and learn from the tape and say, OK, these are the things we need to do different."

A lot of the responsibility lays on fourth-year quarterback Dak Prescott, who has seen his passing yards decrease each week, and has thrown an interception in each of his last three games. He's studying Rodgers closely.

The start of the NFL season saw a slew of rookie quarterbacks taking the reins of teams across the league. Few were more scrutinized than Daniel Jones, stepping into the role of long-time New York Giants quarterback Eli Manning. Jones has performed admirably, leading the Giants to two consecutive wins in two starts. That's not to say the Duke graduate has done it all on his own, as a core of young Giants have stepped up to help Big Blue.

Saquon Barkley, the former top overall pick from 2018, is another reason for New York's success. Despite missing the Giants 24-3 win over the Washington Redskins last week, the running back has rushed for 237 yards this season. The former Penn Stater is currently on the mend from a high ankle sprain, though his recovery is well ahead of schedule, as video showed the star tailback cutting and running on the injured foot.

Evan Engram (25, third year) and Sterling Shepard (26, fourth year) are also leading the team in reception yards and catches. Engram, for his part, is nothing but complimentary of his younger teammates. While discussing Barkley's speedy recovery, Engram joked to reporters: "His body was made in a lab." As for Jones, Engram feels "he wants to try to get as close to perfect as possible ... that's the mindset I've picked up from him."

But it's not just on offense that Jones has some assistance from his youthful counterparts. Last week saw third-year safety/linebacker Jabrill Peppers score his first NFL touchdown after returning an interception to the end zone. Peppers was a big part of the trade that sent Odell Beckham Jr. from New York to the Cleveland Browns. And now, like in Cleveland, the multi-purpose athlete is hoping to make plays on more than just the defense.

"Any way I can have an impact on the game, I'm going to try to do my due diligence to make sure I impact the game," Peppers told reporters.