Up to 10,000 migrants stuck on Greek-Macedonian border 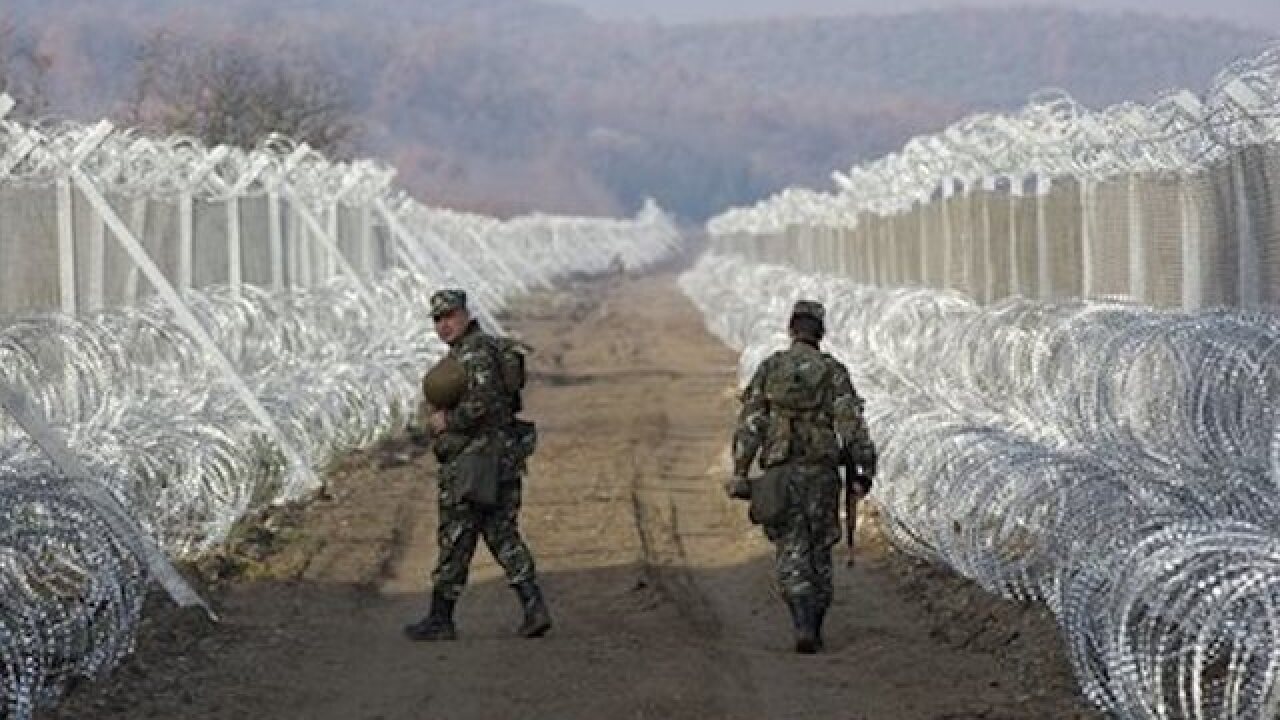 Copyright Associated Press
&lt;p&gt;Macedonian soldiers patrol between two lines of protective fence reinforced with barbed wire along the border line between Macedonia and Greece, near southern Macedonia's town of Gevgelija, Tuesday, March 1, 2016. Macedonian police fired tear gas at hundreds of migrants after they stormed a metal fence along the border with Greece on Monday, Feb. 29, as refugees were blocked from traveling between the two countries on the main route to Western Europe. (AP Photo/Visar Kryeziu)&lt;/p&gt;

IDOMENI, Greece (AP) — On foot or by taxi, hundreds of exhausted refugee families trying to reach Western Europe flocked Tuesday to a burgeoning tent city on Greece's border with Macedonia, which has not allowed anybody in for 24 hours, citing a similar policy by Serbia further north.

Greek police say there could be up to 10,000 people — mostly Syrian and Iraqi refugees — stuck at the country's Idomeni border crossing now in deteriorating conditions. Hundreds of tents fill the fields stretching toward the border fence, which is patrolled on the Macedonian side by scores of regular police, Macedonian special police forces and police from other Balkan countries.

During the day on Monday, Macedonia let in only 30 refugees.

The Idomeni crossing has become a key flashpoint in Europe's migration crisis. Several European nations, led by Austria, have imposed refugee caps and border restrictions over the past 10 days, creating a huge backlog of migrants in Greece. These unilateral actions have infuriated Greece and threaten to damage the unity of the 28-nation European Union.

Some migrants have been waiting at Idomeni for more than a week. The camp is full and hundreds more people arrive daily. Overnight rain soaked many families, who hung up clothing to dry in the sun Tuesday.

Jasmin Rexhepi, head of the aid group Legis which has volunteers working in Macedonia on its borders with Greece and Serbia, told The Associated Press that Macedonian authorities were restricting the numbers of migrants they let through because Serbia only allowed 30 people to cross their border Monday from a train carrying 410 people. He said Macedonia was waiting for Serbia to open that border.

About 70 people including children, who Macedonia says are mostly from Pakistan, have been stuck on the Macedonian side of the border between two razor-wire fences for three days. Rexhepi said Macedonian authorities had been trying to send them back to Greece because they had crossed the border illegally, but Greece was refusing to take them back.

"We are providing food, water, sleeping bags and raincoats for this group," Rexhepi said.

On the Greek side, another group of 150 people who have been told it's their turn to enter Macedonia have spent days in a large, flimsy tent in front of the crossing.

"I've been at Idomeni for 10 days and it's the fourth day I've been waiting to cross over," said Hassan Rasheed, 27, from Iraq. "Conditions are very bad. There are many ill children who are coughing, and we spent the night in this tent under heavy rain."

Macedonia closed its border following clashes Monday when hundreds of migrants tried to force their way into the country. Police responded with tear gas and stun grenades, driving the refugees back.

Nevertheless, small groups of refugees arrive in a steady flow, mostly on foot after walking up to 30 kilometers (18 miles) along Greece's northern highways.

One was Ahmed Majid, a 26-year-old Iraqi travelling with his wife and two children.

"We have been walking for 3 kilometers. Police stopped our taxi on the national road, which is why we are going through the fields," said Majid.

Greece, meanwhile, deported 69 people from North Africa back to Turkey at the Kipi border crossing, saying they were only seeking better jobs and were not refugees in need of protection. A further 230 people are to be sent back by Wednesday, mostly Moroccan, Algerian and Tunisian citizens.