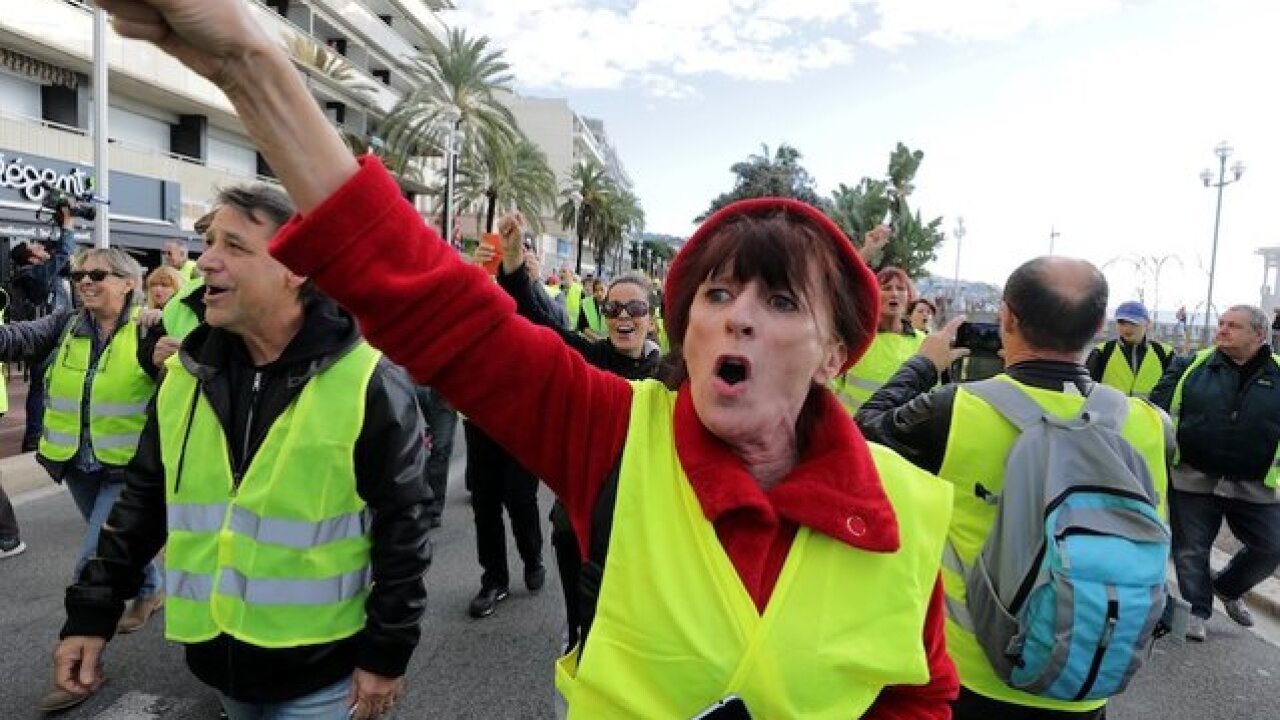 © 2018 Cable News Network, Inc.
&lt;p&gt;A protester was accidentally run over and killed by a car during a demonstration about rising fuel prices, a top official in eastern France said Saturday.&lt;/p&gt;

A protester was accidentally run over and killed by a car during a demonstration over rising fuel prices, a top official in eastern France said Saturday.

Mass demonstrations causing roadblocks across the country are part of the "gilets jaunes" or "yellow vests" movement, which opposesmounting gas prices and eco-taxes on polluting forms of transport.

The death occurred when a driver "panicked" and ran over someone after arriving at a blockade for an undeclared protest not far from the city of Lyon, Louis Laugier, the prefect of the Savoie region, said at a news conference.

A further 227 people were injured -- six severely -- in protests across the country, and 73 people were taken into police custody, the Interior Ministry said in a statement. Five police officers suffered slight injuries, and one was severely injured. Another five gendarmes were hurt as well.

Speaking about the death, French Interior Minister Christophe Castaner said: "That's the reason why we were worried to have people (who are) not experienced organizing protests."

Ecology Minister François de Rugy called on citizens to "respect caution and safety recommendations" in order for protests to go ahead "without a new tragedy," in a tweet Saturday. He also offered his condolences to the family of the victim.

More than 1 million people were expected to turn out Saturday for demonstrations across the country. Partway through the day, the numbers were much lower than that.

About 280,000 people participated in more than 2,000 demonstrations, the Interior Ministry said.

"Honestly we're satisfied, even if it's true we are not hundreds of thousands people here, but still, people have come. The day is not over yet, and we're glad that there are no incidents here," Thierry Paul Valette, who helped organize a protest on the Champs Elysées in Paris, told CNN.

"We can't stand Macron's taxes any more. It's too much. We couldn't make ourselves heard through political parties or trade unions, so we had to do something."

The protest was billed as likely to be one of the toughest tests yet of Emmanuel Macron's 18-month-old presidency.

Website blocage17novembre said protests were planned in all 95 of France's mainland departments, while a petition on change.org calling on the French government to lower the cost of fuel has gotten more than 850,000 signatures.

In addition to concerns over spiraling fuel prices, the protests also reflect long-running tensions between the metropolitan elite and rural poor.

The price hike is largely caused by a leap in the wholesale price of oil, with Brent crude oil -- a benchmark for worldwide oil purchases -- increasing by more than 20% in the first half of 2018 from around $60 a barrel to a peak of $86.07 in early October.

French protesters are, however, not directing their anger at OPEC for reducing oil production, or at the US administration for implementing tariffs on Iran, crippling its oil exports.

Macron is instead bearing the brunt of widespread French discontent, with many protesters furious at the current leader's extension of environmental policies implemented under François Hollande's government.

Notably, taxes were increased by 8 centimes last January on diesel, and by 4 centimes on petrol. Tax on diesel will also increase by another 6.4 centimes in 2019, and by 2.9 centimes for petrol. These rises follow many decades of under-taxation of diesel in France.

The growing resentment has also been a springboard for partisan political attacks, with opponents of Macron's centrist En Marche party attempting to energize their bases to fuel further revolt.

"This government hasn't understood the anger of the French," Olivier Faure, head of the French Socialist Party, said Wednesday.

"Macron has not heard the French," Laurent Wauquiez, leader of the center-right party Les Républicains, added in an interview for BFMTV and RMC radio.

Castaner hit back at Macron's opponents, branding the protests "political" and accusing Les Républicains of being behind them.

"It's a political protest with the Republicans behind it, and it's irrational because the rising taxes have been compensated by the decline in the oil market," he told CNN's French affiliate BFMTV. "We hear the protests, we hear the anger, I know the situation, but we have to explain that it's essential that we exit fossil fuels."

The minister said police would be present to break up any dangerous roadblocks. "I am asking for the roads to not be completely blocked," Castaner said. "Where there is a roadblock -- which means there's a risk for emergency services -- there will be police."

Macron struck a more conciliatory tone in an interview Wednesday, saying: "I hear the anger, and it's a fundamental right in our society to be allowed to express it."

He nevertheless admitted that he was "wary because many different people are trying to piggyback on this movement."