President Trump: China 'attempting to interfere' with 2018 US elections 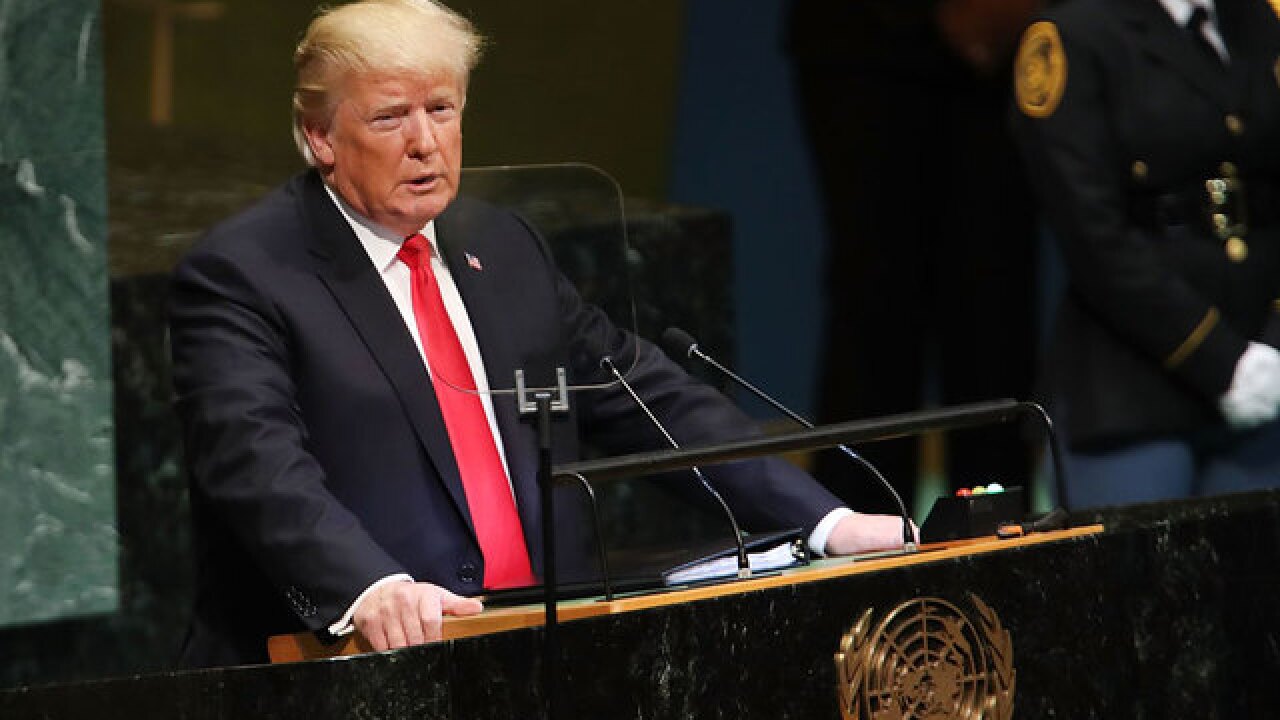 UNITED NATIONS (AP) — President Donald Trump on Wednesday accused China of attempting to interfere in the upcoming United States congressional elections, claiming the Chinese are motivated by opposition to his tough trade policy.

The Chinese said it wasn't so.

Trump, speaking in front of world leaders while chairing the United Nations Security Council for the first time, made his accusation amid the ongoing special counsel investigation into Russia's attempts to interfere in the 2016 U.S. election to help him and concerns that the November elections could also be vulnerable.

"Regrettably, we found that China has been attempting to interfere in our upcoming 2018 election," Trump said "They do not want me or us to win because I am the first president ever to challenge China on trade."

Asked later what evidence he had, he replied, "Plenty of evidence," but he didn't provide any.

H alleged again, "They would like to see me not win because this is the first time ever that they've been confronted on trade. And we are winning and we're winning big. And they can't get involved with our elections."

A Chinese delegate shrugged when he heard Trump's statement via translation in the General Assembly. China later denied Trump's accusation.

U.S. officials did not immediately respond to requests for comment on Trump's remark.

There is extensive evidence linking Russia to attempts to penetrate U.S. elections systems and to influence U.S. voters. But with the elections less than two months away, U.S. intelligence and election-protection officials have not cited any specific, credible Chinese efforts.

Officials say China's cyber-espionage operations targeting U.S. defense and commerce have been formidable, however. And Trump's claim comes amid an escalation of tensions between Washington and Beijing, spurred by their growing trade dispute.

Each imposed tariff increases on the other's goods Monday, and Beijing accused the Trump administration of bullying. A Chinese official said China cannot hold talks on ending the trade dispute while the U.S. "holds a knife" to Beijing's neck by imposing tariff hikes.

U.S. intelligence officials have said they are not now seeing the intensity of Russian intervention registered in 2016 and are also concerned about activity by China, Iran and North Korea. Trump's statement caught lawmakers and some national security officials off guard as Beijing has not been singled out as the most worrisome foe.

Thomas Rid, a Johns Hopkins cybersecurity expert, said, "I am not aware of any evidence of Chinese interference in the midterm elections." He said, "Chinese influence operations tend to be more subtle, less public, and business-related."

China has been accused of interfering in an election before, although not in the United States. Cybersecurity firm Fire Eye released a report in July describing "active compromises of multiple Cambodia entities related to the country's electoral system" including the National Election Commission, before the country's July 29 general elections.

Trump also used his moment chairing the Security Council meeting about nuclear proliferation to issue a strong warning to nuclear-aspirant Iran, which he deemed the "world's leading sponsor of terror" fueling "conflict around the region and far beyond."

The president has withdrawn the U.S. from the 2015 nuclear accord with Iran, accusing the country of destabilizing actions throughout the region and support for terrorist groups like Hezbollah. Tough sanctions are due to kick in against Tehran in November, and Trump warned that there would be "severe consequences" for any nation that defied them.

Despite his tough talk, Trump said he could envision relations with Iran moving along a similar "trajectory" as ones with North Korea. A year ago at the U.N., Trump belittled its leader Kim Jong Un as "Rocket Man" and threatened to annihilate the country, but on Wednesday he touted the "the wonderful relationship" with Kim and teased that details of a second summit between the two men could be released soon.

He also condemned violence in the ongoing bloody civil war in Syria, saying that the "butchery is enabled by Russia and Iran."

Trump also waded into thorny Middle East politics, endorsing the two-state solution to bring an end the decades-long conflict between Israel and the Palestinians. A day after being greeted with laughter by world leaders still uncertain how to manage his "America First" ideology, Trump explicitly backed Israel, noted the moving of the U.S. Embassy to Jerusalem and suggested that he saw progress on the horizon for Middle East peace.

"I like two-state solution," Trump said in his most clear endorsement of the plan as he met with Israeli Prime Minister Benjamin Netanyahu. "That's what I think works best."

Trump indicated that moving the embassy was "a big chip" the U.S. delivered to the Israelis.

"I took probably the biggest chip off the table. And so obviously they have to start, you know, we have to make a fair deal. We have to do something. Deals have to be good for both parties."

"Now that will also mean that Israel will have to do something that is good for the other side."

The two-state "solution" is mostly aspirational. Ongoing conflict between Israel and Palestinians over the division of territory, borders and governance has spawned violence going back years and long stymied Mideast peace efforts.

Moving the embassy from Tel Aviv triggered considerable protest from the Palestinians and expressions of condemnation from many American allies who worried about further violence that could destabilize the fragile region. Trump said that his administration's peace plan, in part helmed by his son-in-law senior adviser Jared Kushner, would be released in the coming months.