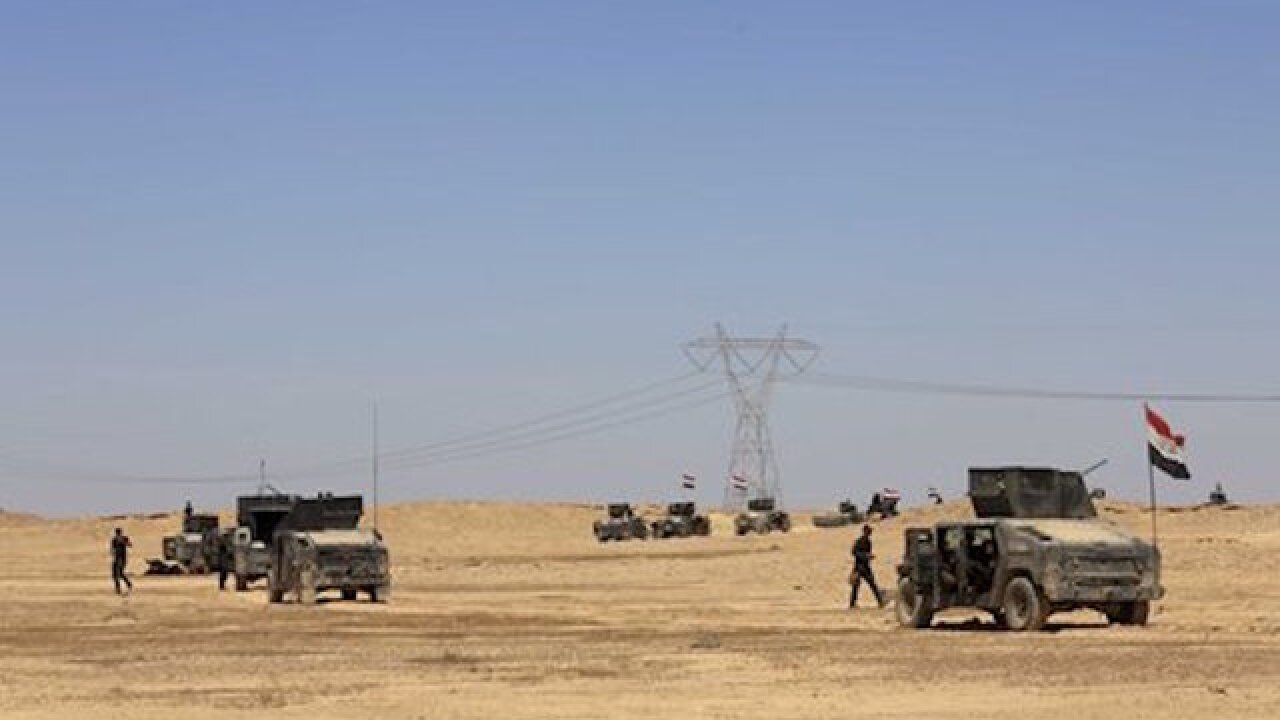 HIT, Iraq (AP) — Heavy resistance has slowed Iraqi forces Tuesday as they pushed forward toward the center of a town held by Islamic State militants in western Anbar province, commanders at the scene said.

Hundreds of roadside bombs, car bombs and heavy mortar fire slowed advancing Iraqi troops to a near halt Tuesday after entering the small town of Hit the previous day.

Hit — which lies along the Euphrates River in a valley in Anbar's sprawling desert — is strategically important as it sits along an IS supply line that links territory controlled by the extremist Sunni group in Iraq and in Syria. Through the line, IS ferries fighters and supplies from Syria into Iraq.

Iraqi troops entered Hit on Monday, under cover of heavy airstrikes and a week after launching the operation to retake the town. Their advance has been stalled as tens of thousands of civilians become trapped by the fighting. A political crisis in Baghdad as well as poor weather conditions further slowed the push.

Iraqi commanders overseeing the operation said Tuesday that counterattacks and a shortage of engineering teams to clear roadside bombs slowed their advance.

"If we had more specialized engineers we wouldn't be in this situation," said the head of Iraq's counterterrorism forces, Gen. Abdel Ghani al-Asadi.

Gen. Husham al-Jabri said Iraqi counterterrorism forces were hit with a barrage of mortars and a string of suicide car bombings on Tuesday morning as they pushed into Hit from the north. He didn't give casualty figures.

"Our speed depends on the resistance we're facing," said al-Jabri, adding that they want to "keep our casualties in the lowest level."

At a makeshift base on Hit's southern edge, Iraqi troops at the front line could be heard saying over a handheld radio to commanders that the "mortars are coming down like rain."

While Iraq's elite counterterrorism forces are some of the country's most capable ground forces, they still depend heavily on U.S.-led coalition air strikes to clear territory.

The head of Iraq's counterterrorism forces, Gen. Abdel Ghani al-Asadi, said he was not surprised by the tough resistance and slow progress.

"Every main road is rigged with explosives," al-Asadi said, explaining that the three small teams of engineers his troops have to clear the area just aren't enough to deal with the density of the bombs. Over the past five days, two armored bulldozers used by Iraqi forces to clear roads were put out of service by roadside bomb blasts.

"The only thing that's not rigged with explosives is the air," al-Asadi said.

On Sunday, a rocket attack killed two Iraqi troops and wounded four others as they entered the city's northern edge. Since Friday, al-Jabri said his forces have been hit with more than 10 suicide car bombs.

"Incoming V-B-I-E-D, 300 meters, over," an Iraqi forward air controller radioed to Australian coalition forces using a military acronym to refer to a car bomb. Coalition forces confirmed the location from the Habaniyah air base about 50 kilometers away using a code name to identify the street the car bomb was approaching on. Moments later a missile was fired from an aircraft overhead destroying the car before it reached the advancing Iraqi forces.

Men were separated from women and children for interrogations at a nearby police station before being allowed to move on to camps for displaced civilians. Since parts of Ramadi were first taken back by Iraqi forces in December, Iraqi security forces say more than 1,500 men have been arrested on suspicion of being IS members.

"This all happened because of you!" a woman from Hit yelled at a truck full of men also fleeing violence. "You let these (people) settle in our city and they just left us to pay the price," she screamed using a profanity and holding one of her small children.

Like many of Iraq's long-marginalized minority Sunni Muslim population, many civilians in Hit initially welcomed IS fighters, as an alternative to the Shiite-dominated government at that time headed by former Prime Minister Nouri al-Maliki. But as IS rule brought with it loss of government services, random violence and increasingly limited access to food and water due to a lack of trade, many civilians began to resent extremist rule.

"You are no longer men in our eyes," the woman yelled before climbing onto a truck to be evacuated from the town's edge. "The children are better than you!"

The Hit offensive comes after a string of territorial victories for Iraqi forces over the past six months. Ramadi, the Anbar provincial capital, was declared fully "liberated" by Iraqi and coalition officials in February. Coalition officials estimate IS has lost more than 40 percent of the territory it held in Iraq after the summer of 2014.