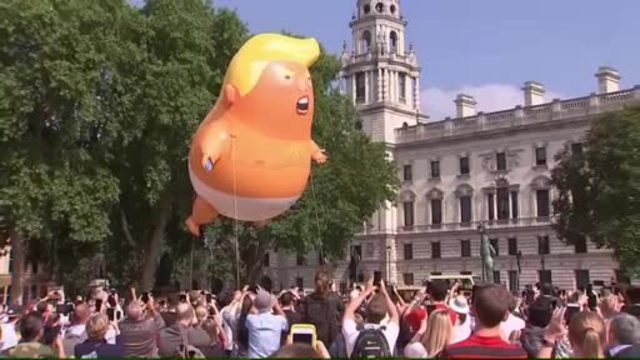 Protesters fly a huge blimp depicting President Trump as a baby holding a cell phone over London to protest against his visit. 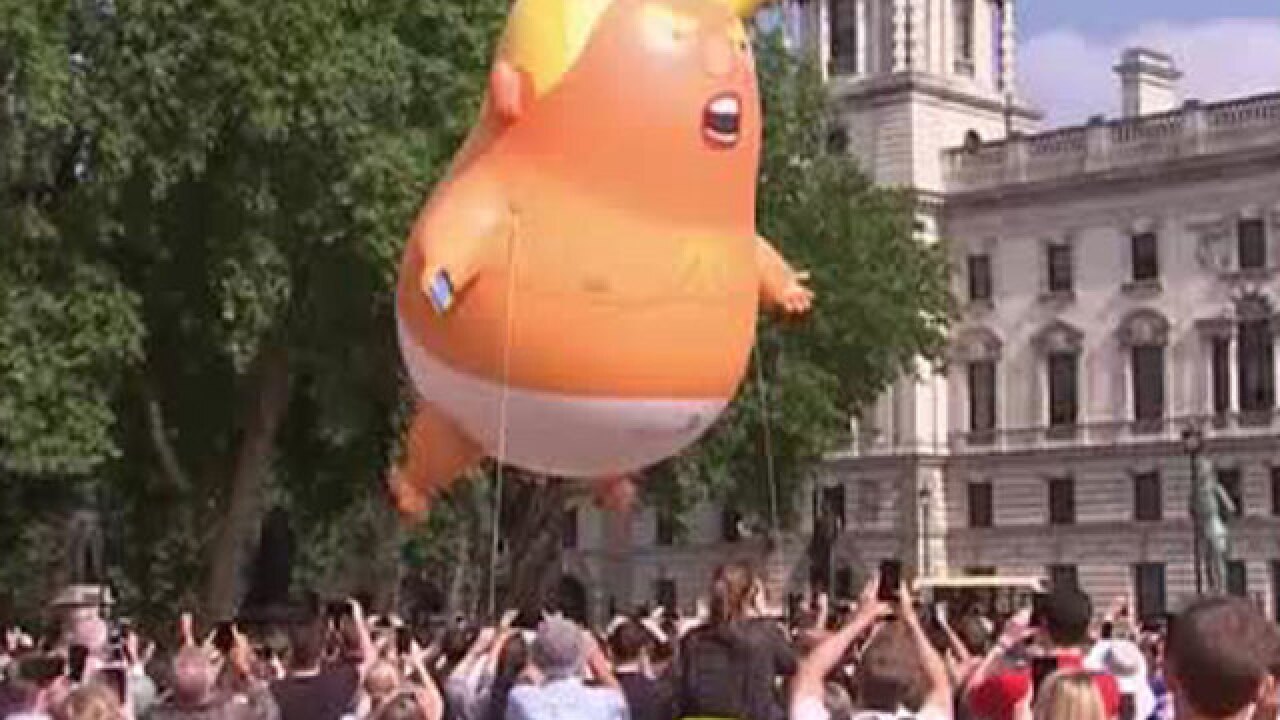 Hundreds of people in London have crowded under a balloon depicting Donald Trump as a screaming baby as protests across the U.K. accompanying the U.S. president's arrival got underway.

Some 16 balloon minders in yellow vests identifying themselves as "babysitters" minded lead lines to the 6-meter (20-foot) inflatable as the curious gawked and took pictures.

Dominique Blum, 31, and Mia Parker, 50, from Pensacola Florida, were overjoyed with the spectacle.

Parker says she hopes the protest will encourage more people to get creative and organized in protesting Trump's policies. She says "it's brilliant. I just want to party with these people forever."

Demonstrators plan to mock U.S. President Donald Trump with a giant balloon depicting him as a screaming orange baby as tens of thousands march through the streets of London to protest the American leader's visit to the U.K.

The diaper-clad balloon infant, with a quiff of hair and a mobile phone for tweeting, is to soar Friday over the Houses of Parliament in London. It's the centerpiece of demonstrations across the country protesting Trump's policies on issues ranging from immigration and race relations to women and climate change.

Kevin Smith, one of the 16 people behind the balloon, says "this is what people need to be doing — to come together in their communities to organize and work out how to stand against right wing populism and xenophobia that we're seeing not just in the U.S. but in Europe."

Protest organizers say they plan to stage demonstrations in some 50 cities around the U.K.

President Donald Trump's visit to Britain is one of the biggest operations for police in recent years, requiring similar resources to the 2014 NATO summit in Wales.

Protests are planned Friday in some 50 U.K. cities. In London, a screaming orange baby balloon will be featured in the anti-Trump protest.

The 20-foot (6-meter) tall balloon's creators, who call themselves babysitters, admit they borrowed the idea from comedian Jon Stewart, who in 2016 called Trump a "man-baby." A crowd-funding campaign raised 20,000 pounds ($26,400) to make it a reality.

Matthew Bonner, one of the organizers, says "depicting Trump as a baby is a great way of targeting his fragile ego, and mocking him is our main motivation."

He says Trump "doesn't seem to be affected by the moral outrage that comes from his behavior and his policies. You can't reason with him but you can ridicule him."