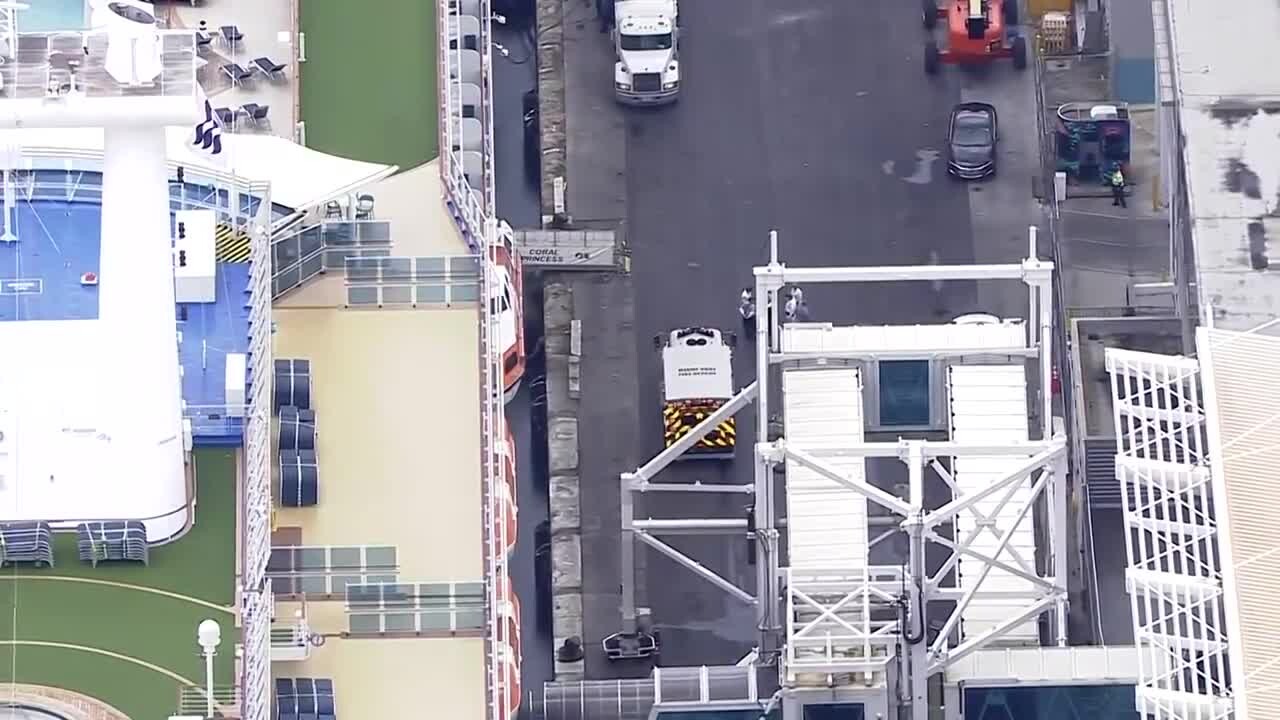 MIAMI — Fourteen people from a cruise ship that docked in Florida over the weekend with coronavirus victims aboard were hospitalized and one of them later died, authorities said Sunday.

Two fatalities had been reported previously aboard the Coral Princess.

The Princess Cruises ship, which docked Saturday in Miami, also began disembarking on Sunday fit passengers who were cleared for charter flights out. Passengers with symptoms of COVID-19 or recovering from it were being kept on the ship until medically cleared.

Family members identified one of the people who died as Wilson Maa. They said Maa waited for an ambulance for hours after the ship docked Saturday, and was eventually taken to Larkin Community Hospital where he died.

"All of us at Princess Cruises are deeply saddened to learn of the passing of the third Coral Princess guest. We offer our sincere condolences to his family and those impacted by this loss," the company said in a statement Monday.

In a statement Sunday night, the Miami-Dade County mayor's office said one of the six people removed Saturday from the ship had died after being taken by private ambulance to a Hialeah hospital.

The statement did not immediately indicate whether the 14 people had a confirmed coronavirus link.

Miami-Dade Mayor Carlos Gimenez on Sunday ordered a local hospital physician and nurses dispatched to PortMiami to assist medical staff aboard the Coral Princess. The statement said officials also replenished the ship’s oxygen supply after determining it was critically low.

Meanwhile, buses lined up near the cruise terminal Sunday to take passengers showing no signs of the illness to the airport, but the process was slow. The cruise line said it was further delayed by a policy the U.S. Centers for Disease Control and Prevention issued overnight, preventing passengers from being placed on commercial flights.

"Princess Cruises continues to work tirelessly to adjust the repatriation plan to meet the new CDC requirements. This will unfortunately result in further delays in disembarkation and onward travel for many guests as we work through this complex, challenging and unfortunate situation," the company said in a news release.

Even before the new policy was issued, the cruise line said getting passengers home would take several days. Disembarkation was limited Sunday to passengers cleared for charter flights to California, Australia and the United Kingdom.

Olivia Dolman, whose parents were waiting to get off the ship Sunday night, said the process had been frustrating.

"Oh, you’re gonna get off then that all changes so it feels a bit like an emotional roller coaster, cause you don’t really know what’s going to happen next," Dolman said.

Before Saturday, the 1,020 passengers and 878 crew members of the Coral Princess had been in limbo for days, awaiting permission to dock. The Coral Princess had been on a South American cruise that was due to end March 19 in Buenos Aires. The ship subsequently encountered obstacles to docking because of various port closures and cancellation of airline flights, the cruise line said.

Last Thursday, Princess Cruises spokeswoman Negin Kamali had said seven passengers and five crew members on the ship had tested positive for the coronavirus. Passengers were self-isolating in their staterooms and meals were being delivered by room service, while crew members were remaining in their quarters when not working.

Princess Cruises is a brand of Miami-based Carnival Corp., the world’s largest cruise company. The cruise line industry announced a voluntarily suspension of most ship operations from U.S. ports on March 13 amid the global pandemic. The next day, the CDC announced a “no sail” order to all cruise ships that had not suspended operations.

For most people, the coronavirus causes mild or moderate symptoms, and the vast majority survive. But for others, especially older adults and people with existing health problems, it can cause pneumonia or death.

Our news partners at WTVJ NBC 6 and the Associated Press contributed to this report.