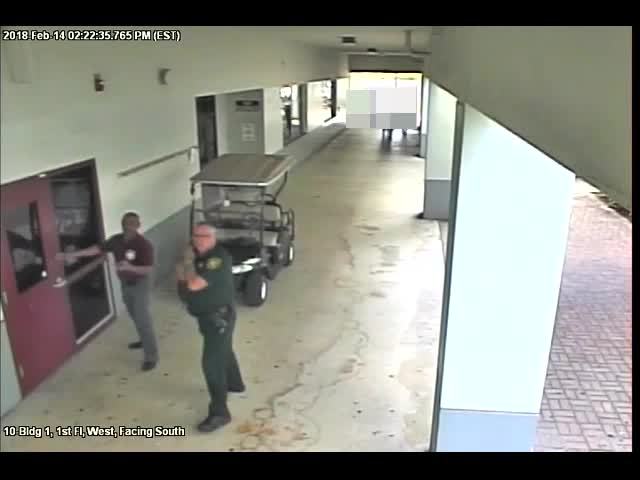 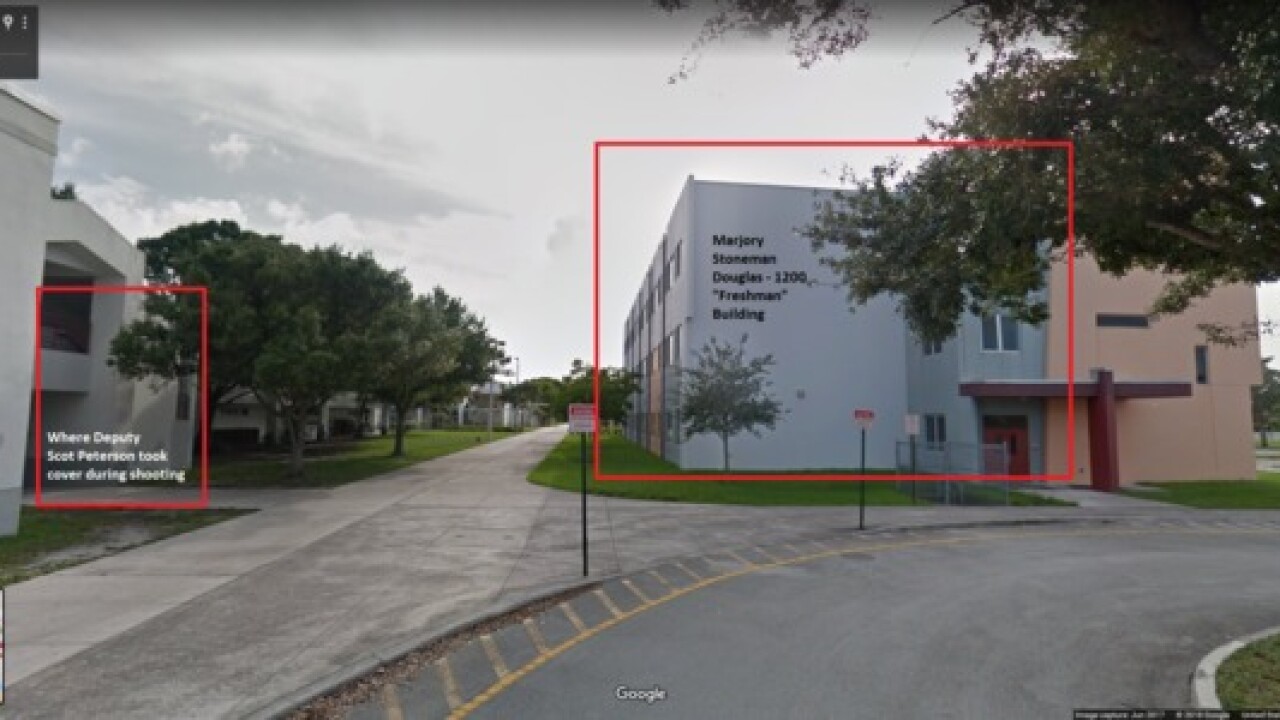 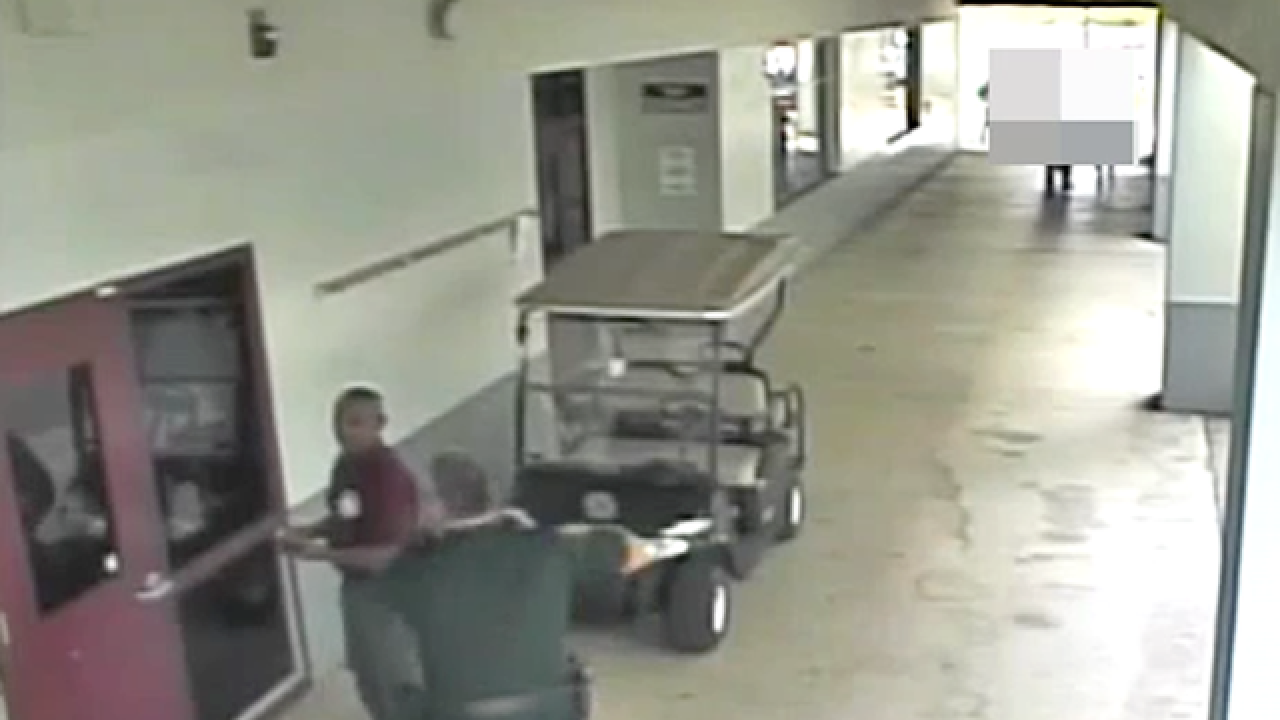 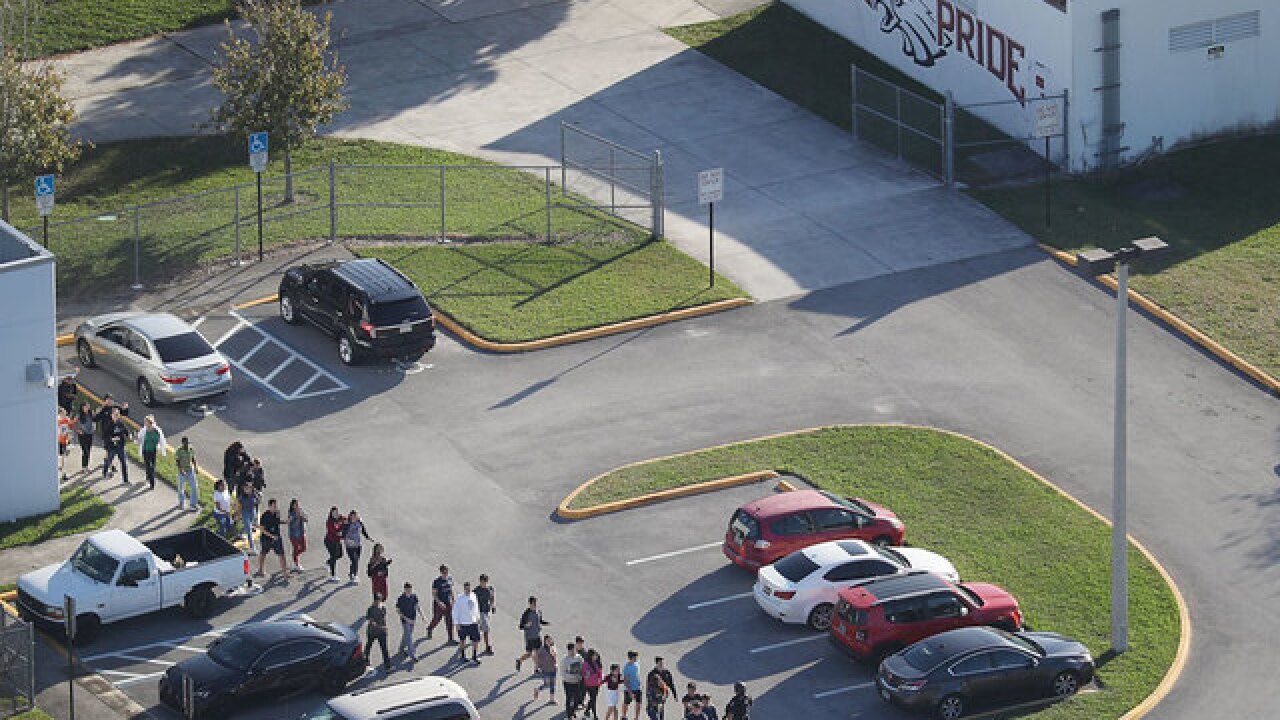 Video released Thursday shows the moments when school officials and a Broward County deputy first reacted to shots being fired inside of Marjory Stoneman Douglas High School just over one month ago.

In the video from the February 14 tragedy, school resource deputy Scot Peterson can be seen with an unidentified school employee walking toward a room at 2:22 p.m, less than a minute after the first shots were fired by alleged gunman Nikolas Cruz.

Less than a minute later, three people - Peterson and two others - can be seen on a golf cart driving through campus. Students, who had their images blurred in the video, can be seen running from their classrooms down an exterior hallway before being told to go in a different direction.

"I actually see him in plain view," Kaplan told Contact 5 Investigator Merris Badcock. "He is actually standing in the [adjacent] stairwell, with his front facing the 1200 building, even though he is going in and out of view because there is a column or a pillar there."

Kaplan says, despite the quality of the video, Peterson never entered the Freshman 1200 Building in an attempt to disarm the gunman.

Through his attorney, Peterson has previously stated he did not enter the building because he thought the shots were coming from outside.

Contact 5 looked at Google Maps with Kaplan, and saw the stairwell Peterson took cover under is adjacent to the Freshman 1200 Building.

"There is no doubt that [Peterson] maintained a position in the stairwell…and he stays there," said Kaplan. "You do not see him do what is call a 'peek-in' with respect of him just tying to open up a doorway of the building, just to try and take a look in, from a tactical point, just to see if he should confirm or dispel if there is an active shooter in that building."

After Peterson was publicly outed by the Broward County Sheriff's Office for his alleged in-actions, media outlets (including WPTV) sued for the right to access that video, saying it was in the public interest.

A Broward circuit judge agreed. Both BSO and the Broward County school district did not appeal the decision, paving the way for Thursday’s release.

The videos have been a source of inquiry since investigations began into several law enforcement officials, including the school’s resource deputy Scot Peterson, reportedly failing to enter the school building where the shooting took place.

Peterson resigned shortly after the investigation was announced, with his attorney claiming he did nothing wrong.

The sheriff's office issued this statement:

We welcomed the court’s decision to release the video of Deputy Scot Peterson’s actions on February 14.
The video speaks for itself. His actions were enough to warrant an internal affairs investigation, as requested by Sheriff Scott Israel on Feb. 21. After being suspended without pay, Peterson chose to resign and immediately retired rather than face possible termination.

The release of surveillance video comes one day after students across South Florida and around the country staged a school walkout to remember those killed and continue the push for gun law reform.

Officials also released more 911 calls from inside the school during and after the shooting.

The WPTV web team contributed to this report.