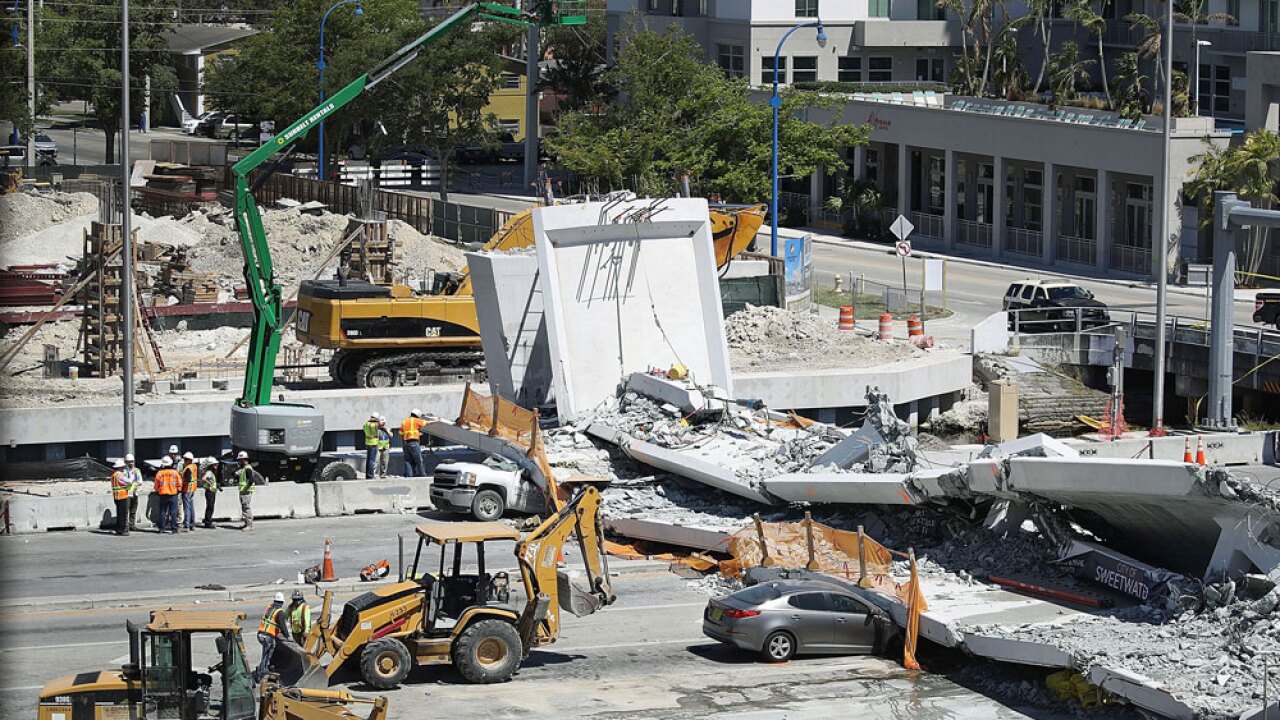 Joe Raedle/Getty Images
Law enforcement and members of the National Transportation Safety Board investigate the scene where a pedestrian bridge collapsed a few days after it was built over southwest 8th street allowing people to bypass the busy street to reach Florida International University on March 16, 2018 in Miami, Florida. (Photo by Joe Raedle/Getty Images)

MIAMI (AP) — The firm that reviewed the design of a Miami university bridge that collapsed and killed six people last year was mistakenly listed in a Florida state report as qualified for that type of project even when it wasn't, federal documents show.

The National Transportation Safety Board released nearly 6,300 pages of reports Tuesday examining the role of each contractor in the construction of the pedestrian bridge at Florida International University that collapsed March 15, 2018 onto eight cars.

NTSB says the Florida Department of Transportation listed the company Louis Berger Group, Inc. on a website-generated report as prequalified to evaluate the construction of a complex concrete bridge. FDOT told investigators it was a "technical error" on its website, as the company was not actually allowed to review that project.

In emails between FDOT representatives and an NTSB investigator, the state's transportation department said firms involved in the project should not have simply relied on the website as proof of Louis Berger's credentials, and should have done their own due diligence, such as seeing an actual letter of qualification from the state.

Furthermore, Louis Berger should have known whether it was qualified for the work, FDOT's special counsel Latasha Johnson wrote in an email to an NTSB investigator.

The level of qualification for that project required companies to have at least three professional engineers registered with the Florida State Board of Professional Engineers, and a minimum of five years of structural concrete bridge design experience.

FDOT told NTSB that Louis Berger never received the qualification that pedestrian bridge required. The company lost a qualification it had for less complex bridge designs in December 2016 because they lost some of their engineers.

Louis Berger did not immediately respond to a request for comment. The company that designed the bridge, FIGG Bridge Engineers, Inc., said in a response to NTSB findings that there was no disclosure on the state website saying firms shouldn't rely on its website.

A report by the U.S. Occupational Safety and Health Administrationhad already revealed that the bridge suffered extensive cracking in the days before the collapse because of a "deficient" structural design. Engineers had knowledge of extensive cracking and failed to order the closure of the busy highway 11 miles (18 kilometers) west of downtown Miami, investigators said.

Will Watts, FDOT's chief engineer, said in a Sept. 20 letter to NTSB "the road should have been completely closed to all traffic if the contractor was undertaking activities that posed a risk to the public."

A Federal Highway Administration assessment released with the trove of documents on Tuesday found that FIGG "made significant errors," in its design calculations, leading to cracking that wasn't properly addressed.

The project was designed to look like a cable-stayed bridge, with steel pipes branching out from a tall mast. But it was never completed. Contractors used a method that avoids disrupting traffic by building bridge spans offsite and then transporting them to the location in a matter of hours.

Engineers began noticing cracks soon after the 174-foot-long (53-meter) span was put in place on March 10, 2018, days before the collapse. A crew was on the bridge working on tightening a diagonal beam the day it collapsed onto traffic.

NTSB will discuss the findings at an Oct. 22 public board meeting that's intended to determine the probable cause of the collapse.