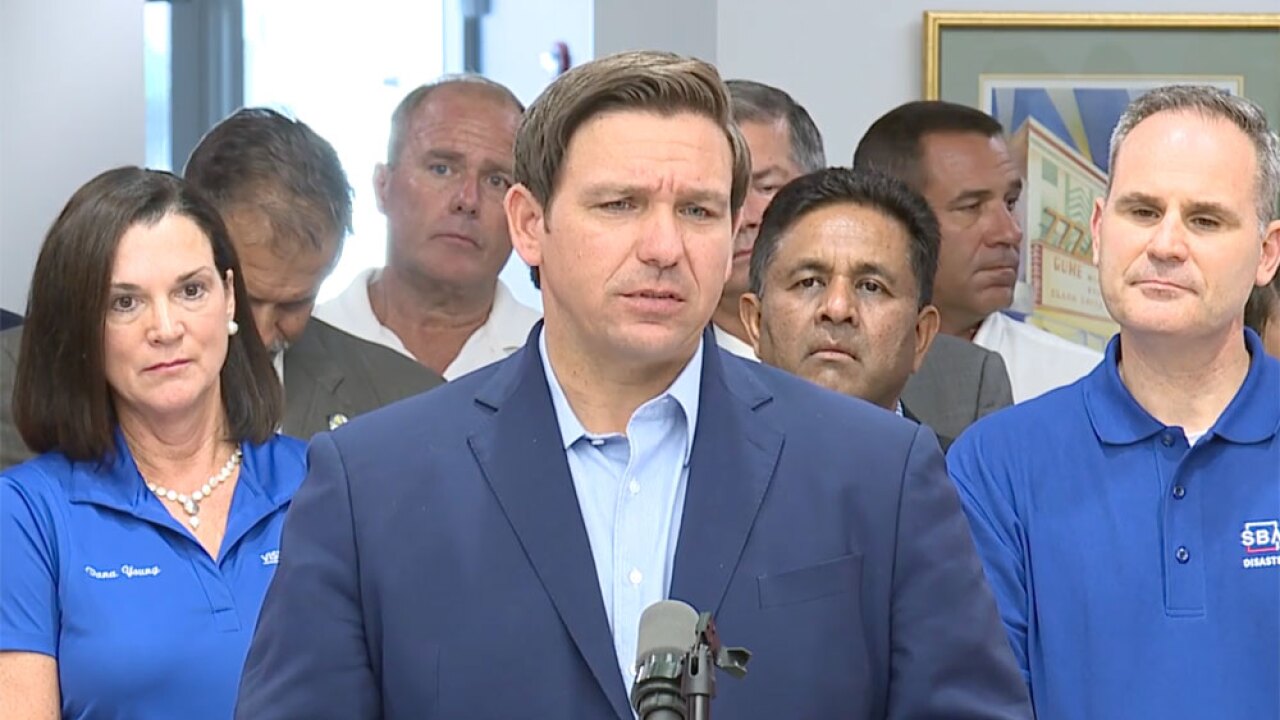 TALLAHASSEE, Fla. --- Vowing that the state won’t forget hurricane-damaged Northwest Florida, Gov. Ron DeSantis on Thursday made his first use of a controversial economic-development program by saying money will go to a pair of roads tied to workforce housing in Bay County.

Marking the one-year anniversary of Category 5 Hurricane Michael slamming into the Panhandle, DeSantis said his first dip into the state’s Job Growth Grant Fund will be for $2.86 million to finance roads and underground utilities for future housing.

During an appearance outside the Panama City City Hall, DeSantis also said he will ask legislators in the 2020 legislative session that begins Jan. 14 to approve another $25 million to help local governments in the storm-damaged region cover expenses.

“As tough as this has been, I think the community has shown a great amount of resilience,” DeSantis said during a tour Thursday that was slated to end with “A Night to Unite,” a hurricane-anniversary event at Tommy Oliver Stadium in Panama City.

The storm, blamed for 52 deaths, caused up to $17 billion in economic losses, with estimated insured losses at $7.1 billion.

Dana Young, president and CEO of the Visit Florida tourism-marketing agency, said the state has spent more than $5 million to counteract an estimated $35 million in negative media attention after the storm.

The jobs fund, created in 2017 over the objections of some Democrats who called it a “slush fund,” allows DeSantis to direct money for infrastructure projects and education programs. The fund was created as a compromise after the state House objected to then-Gov. Rick Scott’s request for money to provide financial incentives to specific businesses.

DeSantis said the money being awarded in Bay County will help the area rebuild needed housing for workers. Panama City and other communities have grappled with housing and worker shortages after many homes were destroyed or severely damaged in the storm.

State lawmakers have put $40 million into the Job Growth Grant Fund program in the current year’s budget. DeSantis has asked for $85 million next fiscal year, which would match the annual amount Scott received from lawmakers.

State Rep. Jay Trumbull, a Panama City Republican who helped orchestrate storm-relief efforts during the 2019 legislative session, praised DeSantis, who has worked with the Trump administration to try to speed and increase the amount of federal aid. DeSantis has close political ties to President Donald Trump.

“It is truly amazing to know that we can count on you all, every step of the way, and look forward to continuing to work with you all and your staff and your agencies through the next session and the next sessions following that to make sure our community sees real relief,” Trumbull said.

For the current fiscal year, lawmakers approved $220.9 million to help the region rebuild from Michael, of which $25 million was for a program that would aid in covering local government expenses.

Two weeks ago, DeSantis awarded Mexico Beach $1.1 million for salaries and other costs for the fire and police departments.

Local government entities have until Tuesday to apply for the assistance.

For next fiscal year, DeSantis wants lawmakers to use $23 million in interest generated by the Triumph Gulf Coast Trust Fund, along with $2 million from general revenue, for the aid program run through the state Division of Emergency Management.

The Triumph Gulf Coast Trust Fund handles money Florida receives in annual settlement payments from BP over the 2010 Deepwater Horizon disaster in the Gulf of Mexico. The non-profit organization Triumph Gulf Coast --- created by the Legislature to direct money to infrastructure and workforce-training programs in the coastal counties of Escambia, Santa Rosa, Okaloosa, Walton, Bay, Gulf, Franklin and Wakulla --- oversees three-fourths of the $2 billion Florida is expected to receive.

On Thursday, the Florida Democratic Party called out DeSantis, state Chief Financial Officer Jimmy Patronis and Trump and said more relief is needed for the region.