Winter storm scatters sleet, ice and misery around the South 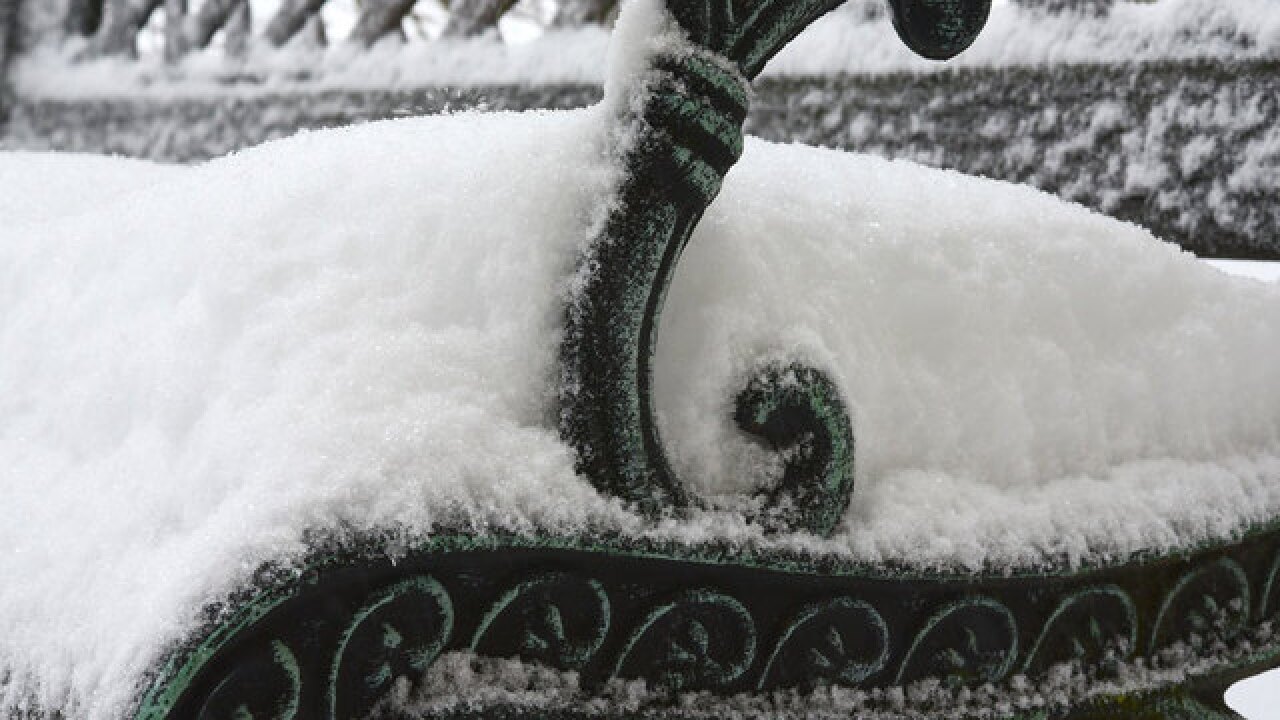 SAVANNAH, Ga. (AP) — A brutal winter storm scattered a wintry mix of snow, sleet and freezing rain from normally balmy north Florida up the Southeast seaboard Wednesday, adding to the misery of a bitter cold snap as bridges iced over and cars spun out on slickened overpasses.

Only a few motorists ventured out in freezing rain that coated bridges and ramps with ice, forcing police to close roads and highways in the historic Georgia coastal city of Savannah. Some cars spun out into guardrails and ice from rain and freezing rain coated the windshields of cars. Police urged drivers to stay off the roads in a region little accustomed to the kind of winter woes common to the Northeast.

Ahead of the storm, dump trucks spread sand on bridges and major streets, and Savannah Mayor Eddie DeLoach warned residents to stay home. Many heeded the mayor's warnings Wednesday, with few drivers out and schools, many businesses and even City Hall closed for the storm.

"The streets will be slick," DeLoach had said in advising Southerners to batten down. "We could have some serious issues for folks who aren't used to driving in this kind of weather."

The coastal city that hasn't seen measurable snowfall since February 2010 was expecting up to 2 inches (5 centimeters) of snow and sleet in the forecast Wednesday.

As the storm settled in, patrol cars with flashing lights blocked elevated ramps, closing off routes slickened by the storm. Porch steps leading up to many of Savannah's elegant Southern homes were frozen over and at least one major causeway was already closed, along with several bridges.

The National Weather Service said the snow and freezing rain was expected to spread up the coast to the Carolinas, amid warnings that icy roads and low visibility could make driving treacherous. Accumulations of 3 to 5 inches (8 to 13 centimeters) were possible in eastern North Carolina.

Georgia Gov. Nathan Deal declared a state of emergency through Friday for 28 counties because of the frigid weather.

The weather service said up to an inch (2.5 centimeters) of snow could fall as far south as Tallahassee, Florida. In fact, snow began falling in Tallahassee early Wednesday — a rare occurrence in the north Florida city.

In central Florida, the state's largest theme parks announced that water attractions such as Disney's Typhoon Lagoon, Universal Orlando's Volcano Bay and SeaWorld's Aquatica were closed Wednesday because of the cold snap.

In Brunswick, Georgia, on the Atlantic coast, law enforcement agencies reported freezing rain and ice on bridges early Wednesday. The icy conditions also were hampering early morning travel in Florida, as authorities were forced to shut a stretch of Interstate 10 east of Tallahassee.

In other parts of the U.S., dangerously cold temperatures have been blamed for at least a dozen deaths as well as freezing a water tower in Iowa and halting ferry service in New York.

Indianapolis early Tuesday tied a record low of minus 12 degrees Fahrenheit (-24 Celsius) for Jan. 2 set in 1887, leading Indianapolis Public Schools to cancel classes. And the northwest Indiana city of Lafayette got down to minus 19 (-28 Celsius), shattering the previous record of minus 5 (-21 Celsius) for the date, set in 1979, the National Weather Service said. After residents there began complaining of a hum, Duke Energy said it was caused by extra power surging through utility lines to meet electricity demands.

"The temperatures are certainly extreme, but we've seen colder," said Joseph Nield, a meteorologist in Indianapolis, noting that the all-time low temperature in Indiana was minus 36 (-38 Celsius) in 1994.

Nevertheless, the cold is nothing to trifle with, forecasters warned.

With Chicago-area wind chills expected between -35 and -20 degrees (-37 and -29 Celsius), forecasters warned of frost bite and hypothermia risks and urged residents to take precautions, including dressing in layers, wearing a hat and gloves, covering exposed skin and bringing pets indoors.

Atlanta hospitals were seeing a surge in emergency room visits for hypothermia and other ailments as temperatures plunge well below freezing. The temperature in Atlanta fell to 13 degrees (-11 Celsius) before dawn on Tuesday.

"We have a group of patients who are coming in off the street who are looking to escape the cold — we have dozens and dozens of those every day," said Dr. Brooks Moore, associate medical director in the emergency department of Grady Health System, which operates Georgia's largest hospital in Atlanta.

Warming shelters were opened across the South as freeze watches and warnings blanketed the region, including hard freeze warnings for much of Louisiana, Mississippi and Alabama.

Plunging temperatures in Texas brought rare snow flurries as far south as Austin, and accidents racked up on icy roads across the state. In the central Texas city of Abilene, the local police chief said more than three dozen vehicle crashes were reported in 24 hours.

Making the most of the South's bitter cold snap, the North Carolina Zoo in Asheboro offered discounted tickets for those willing to brave the cold to see polar bears frolic in their kind of weather, along with Arctic foxes and elk. Nonetheless, African elephants, lions and gorillas were being sheltered out of public view because of the dangerously low temperatures.