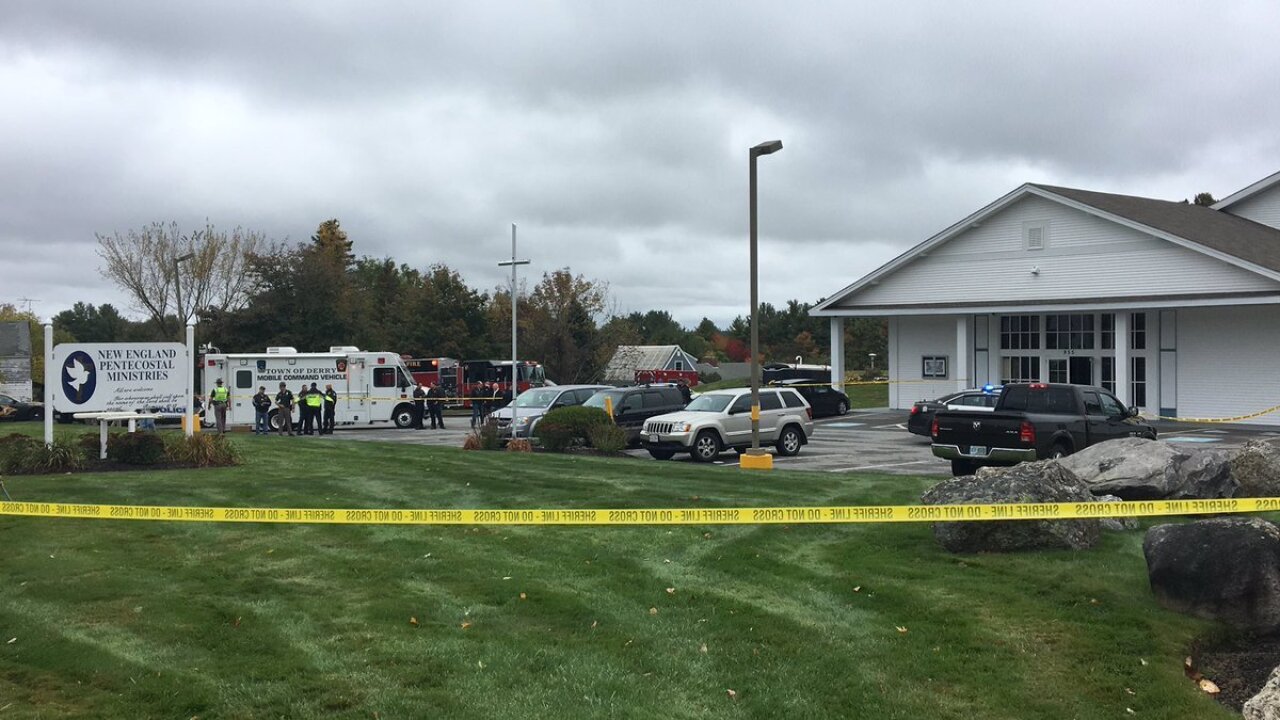 @JeanWmur/Twitter/@JeanWmur/Twitter
**Embargo: Boston, MA** A suspect is in custody after a Saturday shooting at a New Hampshire church left at least one person wounded, Pelham Police Chief Joseph Roark said.

(CNN) -- Two people were wounded when gunfire broke out Saturday morning during a wedding in a small-town New Hampshire church, authorities said.

When officers arrived at New England Pentecostal Ministries in Pelham around 10 a.m. Saturday, wedding guests had subdued the male suspect, Pelham Police Chief Joseph Roark said at a news conference. The suspect was taken into custody but Roark did not identify him or provide a motive.

The church was attracting a crowd on Saturday. Besides the 40-some guests at the wedding, there was also an afternoon funeral for the church's former pastor, who was fatally shot earlier this month in a nearby town.

The suspect's relationship to the wedding guests is uncertain, Roark said.

Two victims with gunshot wounds, one male and one female, were transported to an area hospital by the Pelham Fire Department, Roark said. Their condition was not immediately known. Other wedding guests were treated for minor injuries. Nobody was killed, Roark said.

Roark said Saturday's shooting does not appear to be a random event and that the New Hampshire Attorney General's Office and the NH State Police Major Crimes Unit are taking over the investigation. A handgun was recovered at the scene, Roark said.

The Pelham Police Department provided active shooter training to members of the church within the past year, Roark said.

Former minister was shot and killed

The memorial service scheduled for Saturday afternoon was for Luis Garcia, 60, a minister at the church for six years who was shot and killed October 1, according to CNN affiliate WMUR. The affiliate reported he was shot inside a home in Londonderry and that a suspect was arrested.

"We just came and we found all this police, all this chaos here, and they tell us that the activity will be canceled," memorial service attendee Geraldo Pagan told news media outside the church.

The service was canceled because of the shooting.

Pelham is a town of about 12,000 people 40 miles north of Boston. It is located between two larger cities, Nashua to the west and Salem to the east, and also borders Massachusetts to the south.

Pelham began primarily as a farming community until World War ll, when growth in population and industry took hold.