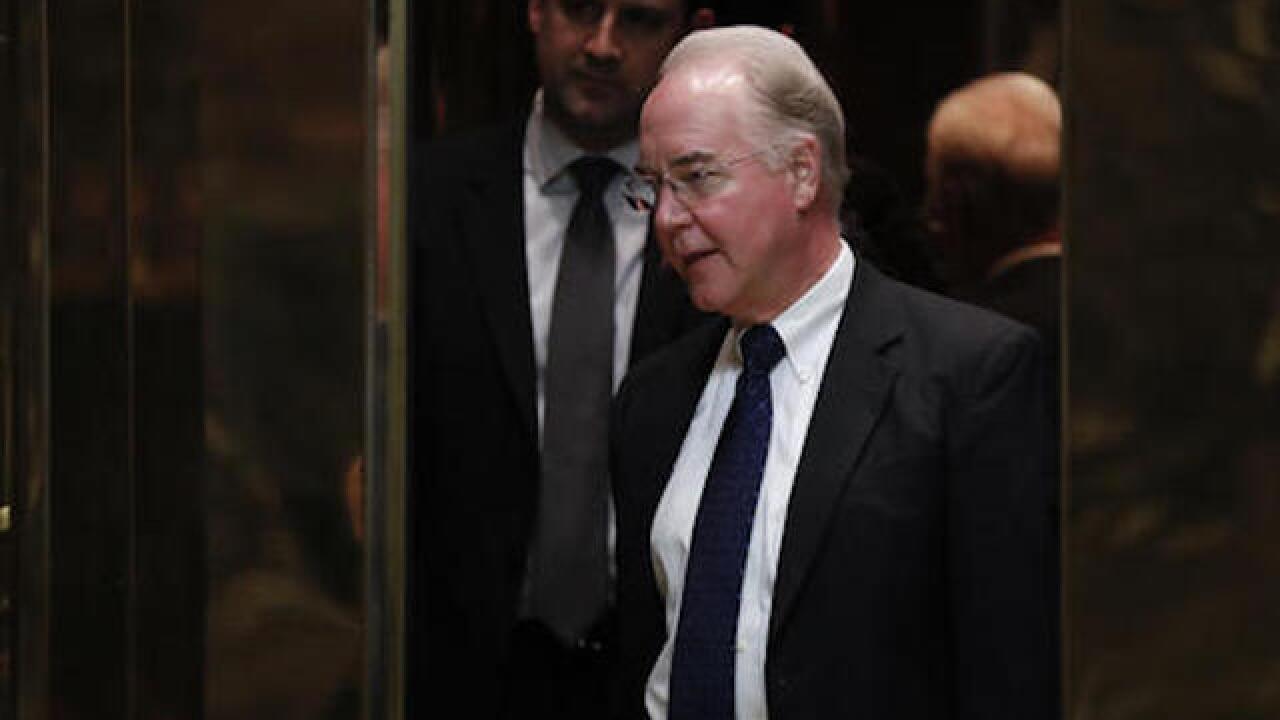 If confirmed by the Senate, Price would play a central role in Republican efforts to repeal and replace the current health care law. Trump has pledged to move quickly on overhauling the landmark measure, but has been vague about what he hopes to see in a replacement bill. Also, Seema Verma was picked to become administrator of the Centers for Medicare and Medicaid Services.

The president-elect has said he favors keeping provisions that allow young people to stay on their parents' health insurance and which prevent insurance companies from denying coverage to those with pre-existing conditions.

Replacing President Barack Obama's health care law is "one of the things he's going to lead the charge on as secretary of HHS," said Jason Miller, a Trump transition team spokesman.

Democrats immediately signaled a fight over the pick.

Sen. Chuck Schumer, the incoming Senate Democratic leader, said Price has proven to be far out of the mainstream of what Americans want" for health care programs and services for seniors, the disabled and women.

"Nominating Congressman Price to be the HHS secretary is akin to asking the fox to guard the hen house," Schumer said.

Price, a 62-year-old six-term congressman and orthopedic surgeon, has chaired the House Budget Committee for the past two years. A bookish conservative from the Atlanta suburbs, Price has worked closely with House Speaker Paul Ryan to assemble GOP budgets aimed at reducing the annual deficit.

In a statement early Tuesday, Price said he is "humbled by the incredible challenges that lay ahead and enthusiastic for the opportunity to be a part of solving them on behalf of the American people."

He said he will work "to ensure we have a health care system that works for patients, families, and doctors, that leads the world in the cure and prevention of illness, and that is based on sensible rules to protect the well-being of the country while embracing its innovative spirit."

Last week, Price said that whatever Republicans do to replace Obama's health care law will bear a "significant resemblance" to a 2015 measure that was vetoed by the president. That bill would have gutted some of the health care law's main features: Medicaid expansion, subsidies to help middle-class Americans buy private policies, the tax penalties for individuals who refused to get coverage and several taxes to support coverage expansion. The bill would have delayed implementation for two years.

Price insisted that Republicans can keep the protections for those with existing medical conditions without mandating that all individuals carry coverage or pay a penalty to support an expanded insurance pool. Price said Republicans want to address "the real cost drivers" of health care price spikes, which he said were not necessarily sicker patients, but a heavy regulatory burden, taxes and lawsuits against medical professionals.

The announcement was expected later in the day, according to the official, who spoke on condition of anonymity because he was not authorized to speak publicly.

Chao, 63, was labor secretary under President George W. Bush and the first Asian American woman to serve in a president's Cabinet. She also is the wife of Senate Majority Leader Mitch McConnell of Kentucky.

Chao came to the United States from Taiwan with her family at age 8. Her family settled in New York, where her father, James Si-Cheng Chao, became a wealthy shipping magnate.

Chao received her undergraduate degree from Mount Holyoke College and a Master of Business Administration from Harvard. She went on to become head of the Peace Corps and deputy secretary at the Transportation Department. She was head of the United Way of America and worked at a Washington think tank before becoming labor secretary.

As labor secretary, her job was to protect the nation's workforce, including setting safety standards and addressing issues related to wages and retirement. She updated overtime regulations for "white-collar" workers and rules intended to force unions to disclose more details on their financial condition to members.

In 2013 — 20 years after Chao and McConnell married — McConnell's financial disclosure reports indicated he and Chao were worth as much as $37 million because of her inheritance. A year prior, her family donated $40 million to Harvard Business School, where Chao and three of her sisters attended.

Chao's ethnicity has made her a target by McConnell's political foes in Kentucky. In 2001, former Kentucky Democratic Party chairwoman Nikki Patton said McConnell "passed up some good Kentucky pork to chow down at the Chinese money buffet." In 2013, a progressive group alleged that Chao helped McConnell move jobs from Kentucky to China.

"Elaine Chao is just as much an American as any of the rest of them," he told Republican supporters at a dinner in 2013. "In fact, she had to go through a lot more to become American."

Chao had been on the board of directors for Bloomberg Philanthropies, run by former New York City Mayor Michael Bloomberg. She resigned last year after learning the organization planned to expand an environmental initiative to shutter coal-fired power plants. Almost 90 percent of Kentucky's electricity comes from coal, and her ties to the organization were used against McConnell in his Senate rate.