Residents on Selden Road between Route 19 and West Bergen are being told to stay inside their homes Tuesday morning after reports of a shooting and fire at a home on Selden Road.

A man who allegedly set his own home on fire before shooting a neighbor in the face, killing him, has been taken into custody.

It began around 3:50 a.m. Tuesday, when authorities were called to a shooting on in LeRoy, N.Y. Authorities say 53-year-old Kyle G. Johnson walked a half mile down the road to a duplex. On one side lived 69-year-old Norman "Don" Ball and on the other side lived his son, Ryan, and grandson.

Genesee Co. Sheriffs still at home where LeRoy man 69, was shot and killed by neighbor. Suspect in custody. @WKBWpic.twitter.com/Fky4h3s3Xi

Authorities say Johnson entered the home through an unlocked back door and spoke with Don Ball's roommate in an upstairs bedroom, asking if Ball was home. The sheriff says the roommate didn't respond and Johnson made his way downstairs, where he found Ball in a bedroom.

Ball, a retired construction business owner and Vietnam veteran, was shot in the head with a 12-gauge shotgun while he was still in bed. Johnson then reportedly walked the half mile back to his home. Here is a photo of the victim: 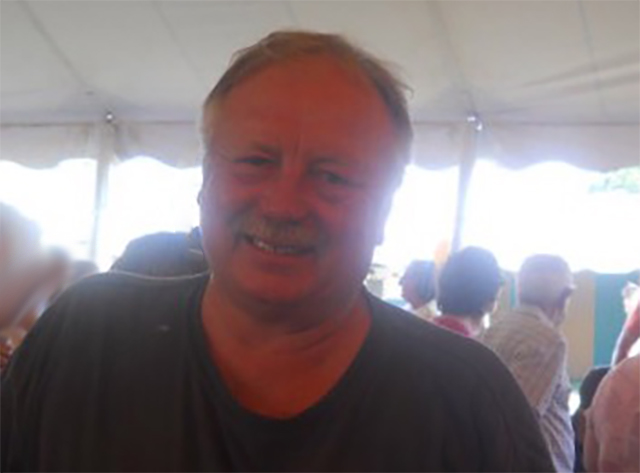 Ryan and his son remained in the duplex, unable to leave for the next two hours until Johnson was taken into custody. Ryan called 911 about the shooting and the first officer arrived on scene around 4:05 a.m.

Around 10 minutes after that, a neighbor called authorities about a fire at Johnson's home. As a police officer and fire chief for LeRoy arrived on scene, authorities say Johnson was standing in the driveway of his home with a shotgun and fired three shots.

Tom Wood, Second Assistant Chief for the LeRoy Fire Department, said, "Chief pulled in along with our mutual safety officer. He was just about to step out when he saw an individual in the driveway with a shotgun pointing it at them or pointing it in their direction and take I believe two to three shots. So he pulled out, got on the radio and said everybody hold. Then he got on the radio and said, 'Shots fired, shots fired.'"

The first responders were not injured, but felt they were in danger and left the scene. They kept everyone away from the scene and let the house continue to burn.

Around 5:30 a.m., nearby residents were ordered to shelter in place. That lasted until almost 8 a.m. when the suspect was taken into custody. Here is a map of the scene:

Police say Johnson, who was armed, was found pacing back and forth in his driveway as his home burned. His home was destroyed with nothing remaining but twisted metal and piles of rubble.

Here's burned down house. It is about a 1/2 mile from the duplex where the standoff took place. Still smokey @WKBWpic.twitter.com/nP6GJe22RT

Johnson reportedly ignored commands to surrender. But after he put down his weapon, he was rushed by SWAT members who took him into custody.

An investigation is underway into the deadly shooting and fire and the sheriff would not speculate on a motive, though he did say Johnson made statements to police. He reportedly has a history of mental health issues.

Here is the suspect's mug shot after he was taken into custody:

Authorities say Johnson may have been trying to commit suicide by having officers shoot him.

Jon Marcello lives next door and said, "SWAT teams all around the house telling him to put the gun down and he wasn't complying and he was actually taunting them, telling them to shoot him."

The family says they do not know the shooter. They were relieved to be reunited with Ryan Ball and his son after the incident ended.

Ryan Ball & his infant son share a moment after today's standoff. They were inside during it all @WKBWpic.twitter.com/JzAPY1oyFT