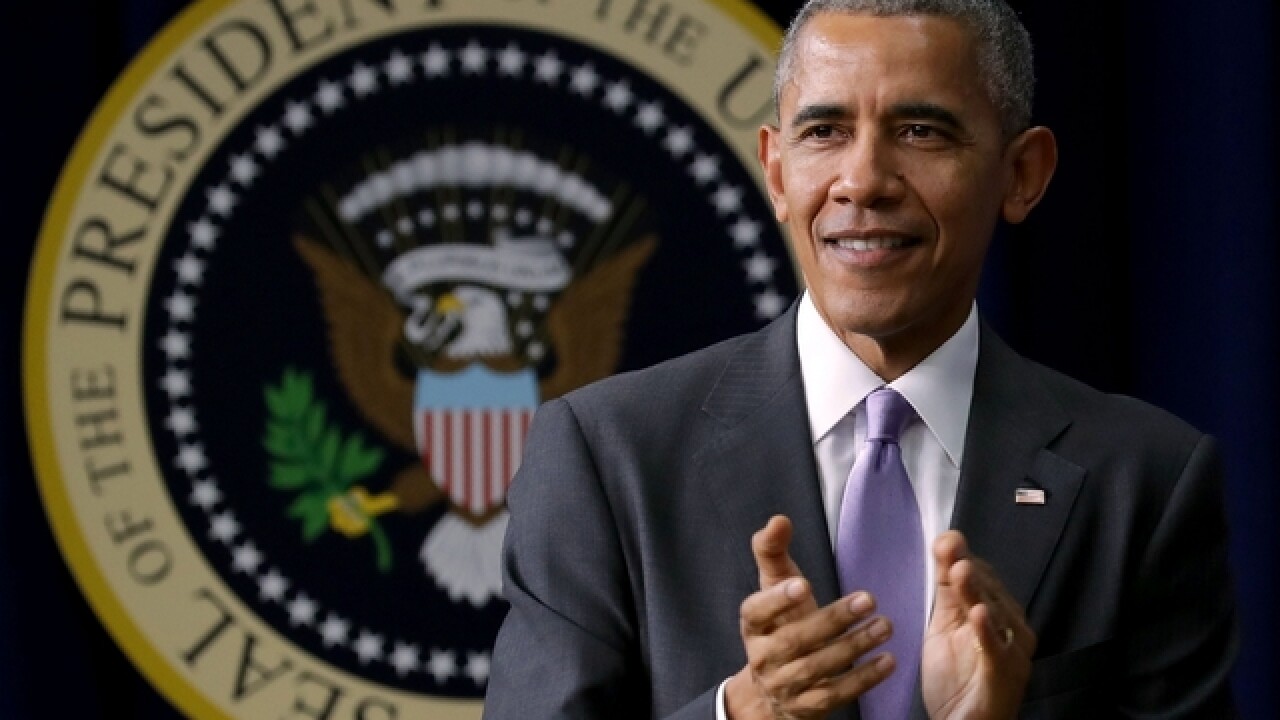 By: CNN
Posted at 4:47 PM, Jan 08, 2017
WASHINGTON (CNN) -- President Obama's farewell speech. President-elect Trump's strategy on government inaction. And Team Trump's influence over state party organizations.
It's all a part of this week's "Inside Politics" forecast, where you get tomorrow's headlines today.
1) Obama's 'admonitions'
President Obama will bid the nation goodbye Tuesday night in his last big speech before yielding the spotlight to the Trump inauguration hoopla.
You can be sure the President will offer another defense of his signature health care law and make the case that his administration put the economy back on solid footing after inheriting the 2008 financial crisis.
The buzzy part, though, is likely to be what one Obama loyalist called a series of "admonitions about the challenges we face moving forward."
Those admonitions will likely be squarely aimed at President-elect Donald Trump, and may include calls to celebrate America's diversity, to be more respectful of critics and, as the loyalist put it, "to strengthen and embrace our democracy."
2) A 'slash and burn' approach?
Every new president makes a splash on Inauguration Day with early executive orders and actions. We are told to expect Trump to stick with that tradition.
But perhaps with an interesting twist.
Abby Phillip of The Washington Post reports that in addition to telling agencies what he wants them to do, the new president is also considering telling some agencies to stand down, or be less active.
On that list: the Consumer Financial Protection Bureau, which is supposed to protect citizens from unscrupulous business practices. It was launched by Elizabeth Warren before she was elected to the US Senate from Massachusetts.
"One big part of this could be ... a strategy that will allow him to have pretty widespread impact on the federal government immediately by simply telling people don't do anything, " explains Phillip.
"And that's something that Republicans have wanted to do. It's sort of a slash and burn type of approach to federal governance and it's very different from what Washington has seen the last several years."
3) Trump's influence on state party races
Donald Trump has a long memory. Just ask Ohio Republicans.
Gov. John Kasich never endorsed Trump, and now the President-elect is trying to exact revenge on a Kasich ally who is chairman of the state Republican Party.
CNN's Jeff Zeleny says Ohio is just one state where Team Trump is trying to exert influence over state party organizations.
"Donald Trump was personal, weighing in making telephone calls around the clock," says Zeleny. "It was part of a bloodbath, perhaps another installment of it with John Kasich. Donald Trump's people are watching the chairmanships across the country. A prime example, Ohio. And the Minnesota race is also open and a battle is brewing in Florida."
4) Trump's favorite Democratic senator
Joe Manchin didn't get a job in Trump's Cabinet. But he is emerging as the President-elect's favorite Democrat on Capitol Hill.
The West Virginia senator skipped the meeting with Obama when the President came to the Hill last week to talk health care, but then had a private meeting on the same issue with Vice President-elect Mike Pence.
With Republicans having just a 52-48 Senate majority, Democratic votes for Trump initiatives will be vital. And CNN's Manu Raju says Manchin's calculation is that being close to Trump might annoy some of his Democratic colleagues in DC, but it will help with the voters back home.
"I talked to Manchin ...he said he's open to working with the Trump team on a replacement plan for Obamacare, even though he opposes the repeal," Raju says. "That's much different from other Democrats. And, of course, their interests do align. Manchin is up for re-election in a very conservative state. Trump needs some Democratic support in the Senate to move his agenda. There are 10 Democratic senators who represent states that Trump overwhelmingly carried and five are very red states like West Virginia."
5) Lowering college costs
Making college more affordable was a big theme in the Democratic presidential primaries last year, and one of the issues Hillary Clinton used to win the eventual support of rival Bernie Sanders.
It remains a big priority for the Vermont senator and colleagues like Elizabeth Warren, and will be an issue when the President-elect's choice for education secretary, Betsy DeVos, gets her confirmation hearing.
Jackie Kucinich of The Daily Beast explains the dynamics.
"To what extent do the senators [Warren and Sanders] bring the issue back to the forefront?" she wonders. "Because it's not something that's going to go away with the 2016 campaign."
The-CNN-Wire
™ & © 2017 Cable News Network, Inc., a Time Warner Company. All rights reserved.
Copyright 2017 Scripps Media, Inc. All rights reserved. This material may not be published, broadcast, rewritten, or redistributed.