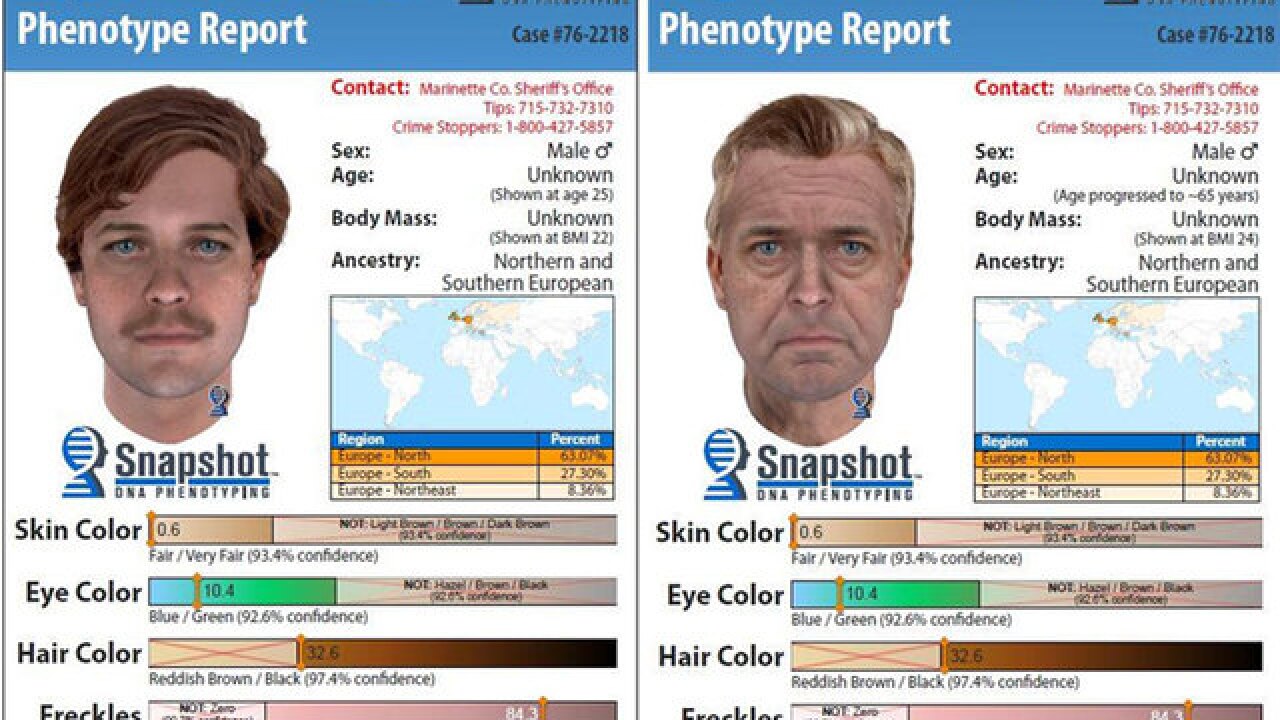 (CNN) -- For more than four decades, police trying to solve a double homicide in rural Wisconsin could only rely on the recollections of two nearby hikers.

No longer. Thanks to advances in DNA technology, law enforcement now has a better idea of a physical description for the suspect they say sexually assaulted and killed a young couple out camping.

The Marinette County Sheriff's Office released composite images of the unnamed suspect two weeks ago, depicting the suspect's likely appearance at different ages. Since then, police have received more than 60 tips on possible suspects and regenerated interest in solving the killings.

"Basically now we're just going to go start (DNA) swabbing individuals that we got tips on, and hopefully we can hit on one of them," detective Todd Baldwin said. "It's 42 years old so we're a little cautious, but it's generated new interest ... in a case that's gone so cold."

The cold case dates to July 9, 1976, when David Schuldes and Ellen Matheys drove from Green Bay, Wisconsin, up to Marinette County to go camping for the weekend.

They had just set up camp in the woods on Friday afternoon when Schuldes was shot and killed with a 30-caliber rifle by an unknown suspect. Matheys was then sexually assaulted and fatally shot, Baldwin said.

Clues as to the identity of the suspect have been few and far between. Two individuals who were hiking in the area heard the gunshots and later observed an individual walking with a rifle, which gave police some identifying features. A vehicle was also seen in a parking lot nearby.

But overall, the lack of witnesses, the dearth of solid leads, and the remote location of the crime scene made solving the case "like (finding) a needle in a haystack," Baldwin said.

Investigators did, though, have DNA from the suspect's semen. The DNA has been run through the national database CODIS since 1996, but there have been no matches.

So in April, nearly 42 years after the crime, the Marinette County Sheriff's Office reached out to Parabon, a DNA company, to conduct further DNA analyses.

Parabon used DNA Phenotyping, a technology that takes a DNA sample and predicts a person's likely physical appearance. The composite images of the suspect around age 25 and around age 65 depict him having fair or very fair skin color, blue or green eyes, reddish brown or black hair and some or few freckles. The suspect's ancestry is from Northern and Southern Europe.

Parabon is the same company that has used DNA technology to help solve several cold cases in recent months, including the arrest of a suspect who police say raped and killed 8-year-old April Tinsley in Indiana in 1988.

Baldwin, who has been looking into this case since 2001, said the sheriff's office paid about $3,600 to $4,000 to Parabon for the analysis. That money was absolutely worth it, he said.

"Anything that can generate any kind of leads," he said. "We haven't gone through all the tips that we've gotten, so hopefully we can get this individual in custody."