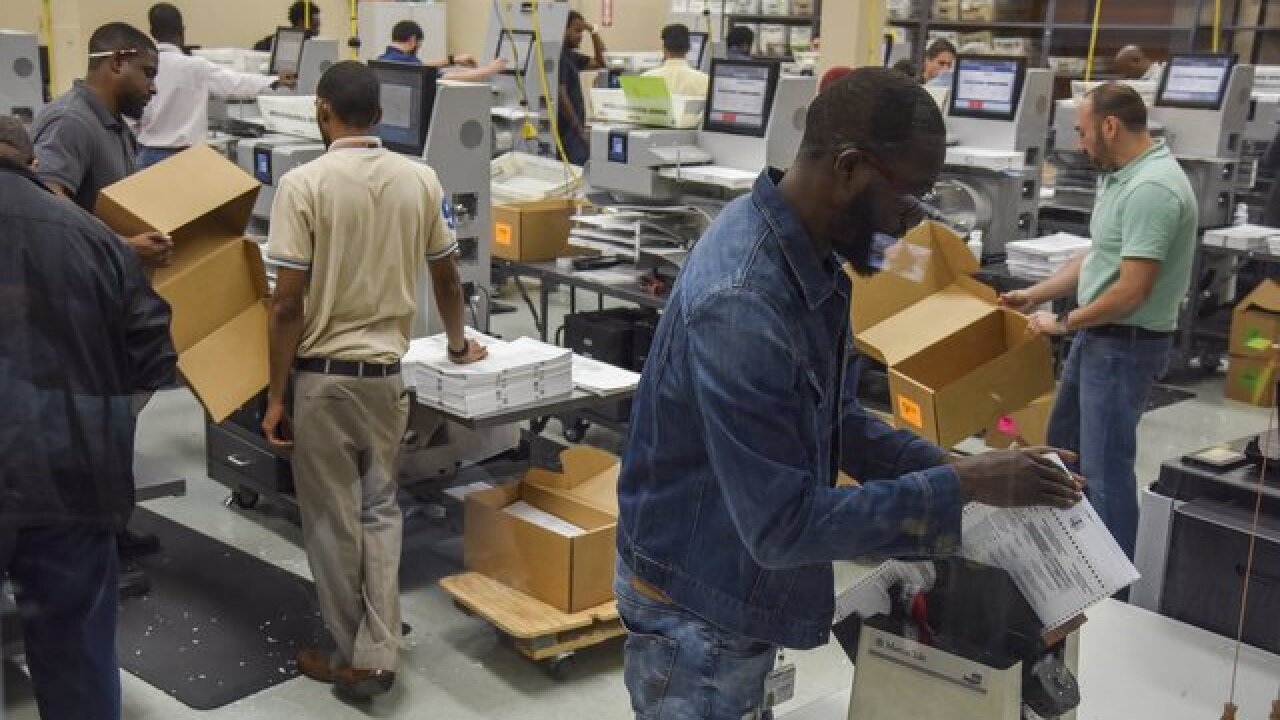 © 2018 Cable News Network, Inc.
&lt;p&gt;Florida's deadline to complete a state-mandated election recount arrives Thursday afternoon, and one of the counties at the center of the effort is in danger of missing it.&lt;/p&gt;

The Florida recount deadline passed on Thursday afternoon with at least one of the state's largest counties unable to complete the task.

Florida law stipulates that any races with margins outside 0.25% can now be certified by law. Races that are still within that range will head to a manual recount of overvotes and undervotes to be completed by Sunday at noon.

Election boards in every Florida county have been using voting machines to recount ballots this week, with some of the larger counties working all day and night. There are currently three statewide races -- the contests between Democratic Sen. Bill Nelson and Republican Gov. Rick Scott for Senate; Democratic Tallahassee Mayor Andrew Gillum and Republican former Rep. Ron DeSantis for governor; Republican Matt Caldwell and Democrat Nikki Fried for agriculture commissioner -- that were within the .5% margin required for a statewide machine recount.

The fiery race between DeSantis and Gillum is the most likely to come to a formal end. The Republican led by roughly 33,000 votes after the initial count. Gillum, who conceded the race on election night before taking back his concession a few days later, tweeted on Wednesday, "I believe that we win," hinting that he believes the gap could narrow. But there is no evidence yet that he made up enough ground to extend the fight.

The two other contests are significantly closer and appear likely to head to a hand recount. Nelson and Scott are divided by roughly 12,000 votes, which is why most of the flurry of recent legal action has been spun out of their race.

Palm Beach County missed the deadline, which a court ruled on Thursday afternoon will not be extended.

Hours before the cutoff, a federal judge in Tallahassee rejected a Democratic motion to extend the deadline beyond 3 p.m., meaning last week's unofficial count out of Palm Beach County will likely stand.

Nelson's campaign and the Democratic Senatorial Campaign Committee argued that deadlines for both the machine and subsequent hand recounts should be lifted for however long is determined is necessary by the counties.

"The Florida legislature chose to define emergency narrowly -- only as an event that results or may result in substantial injury or harm to the population or substantial damage to or loss of property," Judge Mark Walker wrote in explaining his decision. "The emergency exception does not apply in this case, where the delay is the result of outdated and malfunctioning vote-counting technology."

Palm Beach County has been hampered repeatedly by faltering machinery and shoddy infrastructure.

Susan Bucher, the county's supervisor of elections, told reporters on Thursday she takes "full responsibility" if the county fails to recount before today's deadline.

"As a supervisor I take full responsibility. That's my job. It was not for lack of human effort ... it was so incredible, and I thank everybody who participated," she told CNN's Rosa Flores during a press conference.

Bucher told reporters a little more than 24 hours before the cut-off, slated for 3 p.m. on Thursday, that she was in "prayer mode." On Sunday, hours after the recount began, Bucher said that completing the process would be "impossible."

CNN has not called the Senate race between incumbent Nelson and his challenger, Republican Gov. Rick Scott. Before the recount began, Scott led Nelson by around 12,000 votes. The margin in the gubernatorial race between Republican Ron DeSantis and Democrat Andrew Gillum, which is also subject of the recount, is larger, with DeSantis up on Gillum by around 33,000 votes.

Bucher's worries were compounded on Tuesday when the county's old and overheated machines malfunctioned, forcing officials to start their recount of early votes from scratch. By Wednesday, the already distant hopes of an on-time finish seemed to be slipping away.

CNN observed long stretches of inaction on the floor of the cavernous facility which has been occupied by reporters, lawyers and operatives from both parties, and volunteers who have been working -- when the hardware complies -- day and night.

"It's an unusual request to make of your staff. You know, can you leave your kids behind, stay here and I'll feed you sub sandwiches and pizza and you'll work your brains out," Bucher said on Wednesday. "We're trying to meet a deadline that really reasonably shouldn't be there."

Democrats agree -- and will make their case in a federal court in Fort Lauderdale on Thursday morning at 9 a.m.

Lawyers for Nelson's campaign and the Democratic Senate campaign arm are suing to allow all 67 counties the time they say is required to complete their recounts. According to a legal filing, the Democrats will argue that enforcement of the current deadlines, including another on Sunday at noon for a potential hand review, would violate the constitutional rights of "thousands of Florida voters at risk of disenfranchisement in the 2018 general election."

If their suit is rejected and Palm Beach County fails to complete its work on schedule, the state is expected to certify the unofficial results as initially reported ahead of the recount.

A spokeswoman for the Florida Department of State told CNN on Sunday that Florida law does not give the secretary of state the authority to grant extensions.

Palm Beach County GOP Chairman Michael Barnett told CNN on Sunday afternoon that a blown deadline would be "good news for Republicans, because our candidates (for Senate and governor) are ahead."

"If they're not able to meet the deadline, the secretary of state of Florida may go ahead and certify the elections for our candidates," Barnett said. "In that case, you can bet your butt there will be lawsuits filed everywhere."

Barnett, who was inside the facility along with Democrats early on in the recount, was critical of the infrastructure there from the start.

"It's an outdated process," he said. "The machinery is old. They don't have enough updated machinery to go through all the ballots to run one election, let alone all three statewide races."

As of 4 p.m. Wednesday, at least 48 of Florida's 67 counties had finished their recounts. Every one of them reached by CNN -- with the exception of Palm Beach -- expressed confidence they would get in under the wire.

In a different lawsuit, a federal judge in Florida ruled Thursday that the state must give voters whose mismatched signatures disqualified their provisional and mail-in ballots until Saturday at 5 p.m. ET to correct those signature problems -- extending the deadline by two days.