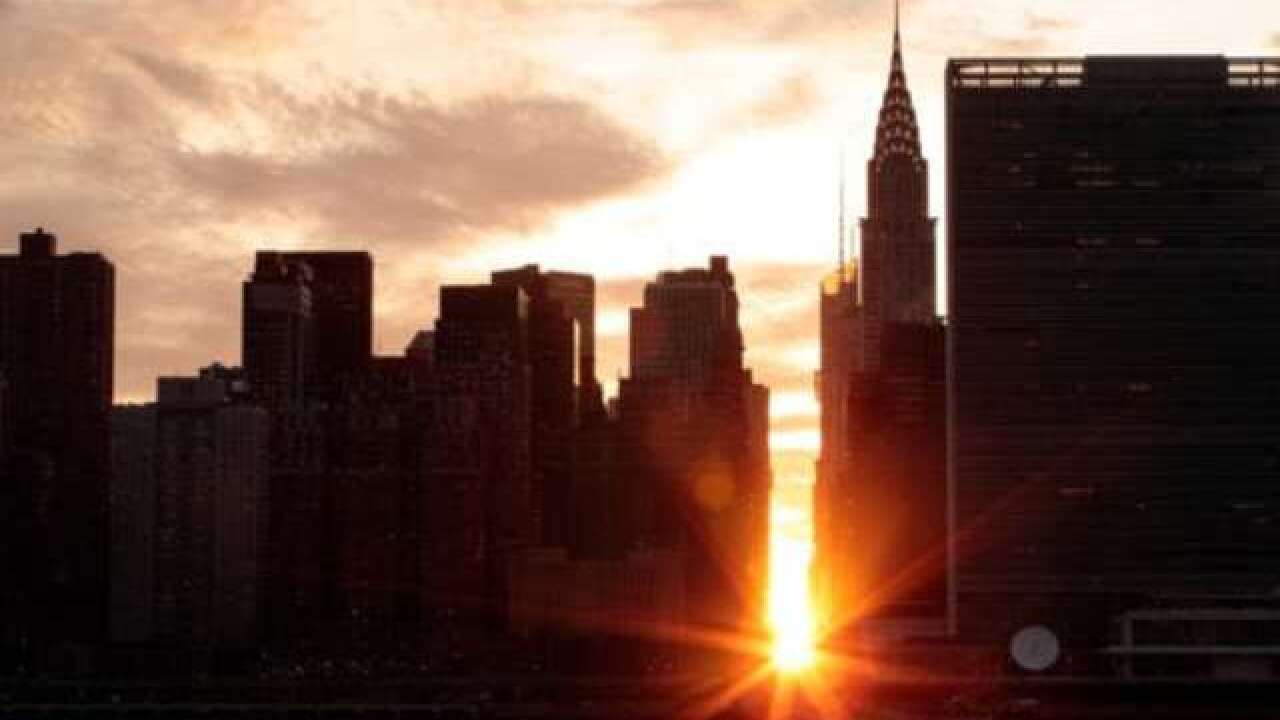 It's a magical moment that can leave viewers awestruck: The sun aligns perfectly through spaces between carefully constructed monolithic structures to cast an amazing beam of light.

No, we're not talking about the ancient site of Stonehenge in the English countryside. This is the modern version -- "Manhattanhenge" in New York City. if you live there or just happen to be in New York for travel, you could be in for a real treat.

Light from the sunsets on Thursday and Friday (July 12 and 13, 2018) will shoot down roads running east to west with no blockage from the borough's famous skyscrapers. Official sunset for both evenings is 8:27 p.m. ET. You might want to seek out a good spot about a half hour before sunset.

CNN Senior Meteorologist Brandon Miller has good news for sun fans: "Weather looks near perfect for viewing the sunset both on Thursday and Friday evenings. Temperatures will be around 80 degrees and most importantly, skies should be mostly clear, with very little cloud cover."

You can thank Manhattan's easy-to-use grid system, which dates back to the early 1800s, for the effect. This happy alignment starts at Houston Street and runs up to just south of 155th Street.

If Manhattan's street grid was perfectly aligned along north-south lines, then Manhattanhenge would coincide with the equinoxes. But Manhattan's layout is rotated 30 degrees east from geographic north, shifting the days of alignment to late May and mid-July.

Where does the name come from?

The term "Manhattanhenge" is popularly attributed to astrophysicist Neil deGrasse Tyson, who word-played off Britain's Stonehenge. That ancient structure highlights the sun in similar fashion during the winter and summer solstices.

Where to see it?

Tyson has some advice for the superior places to enjoy the phenomenon on the website of the American Museum of Natural History.

"For best effect, position yourself as far east in Manhattan as possible. But ensure that when you look west across the avenues, you can still see New Jersey." He lists the following streets as particularly good ones since they are wider:

While this is called "Manhattanhenge," photos will attest you can also get this effect in parts of Queens, too.