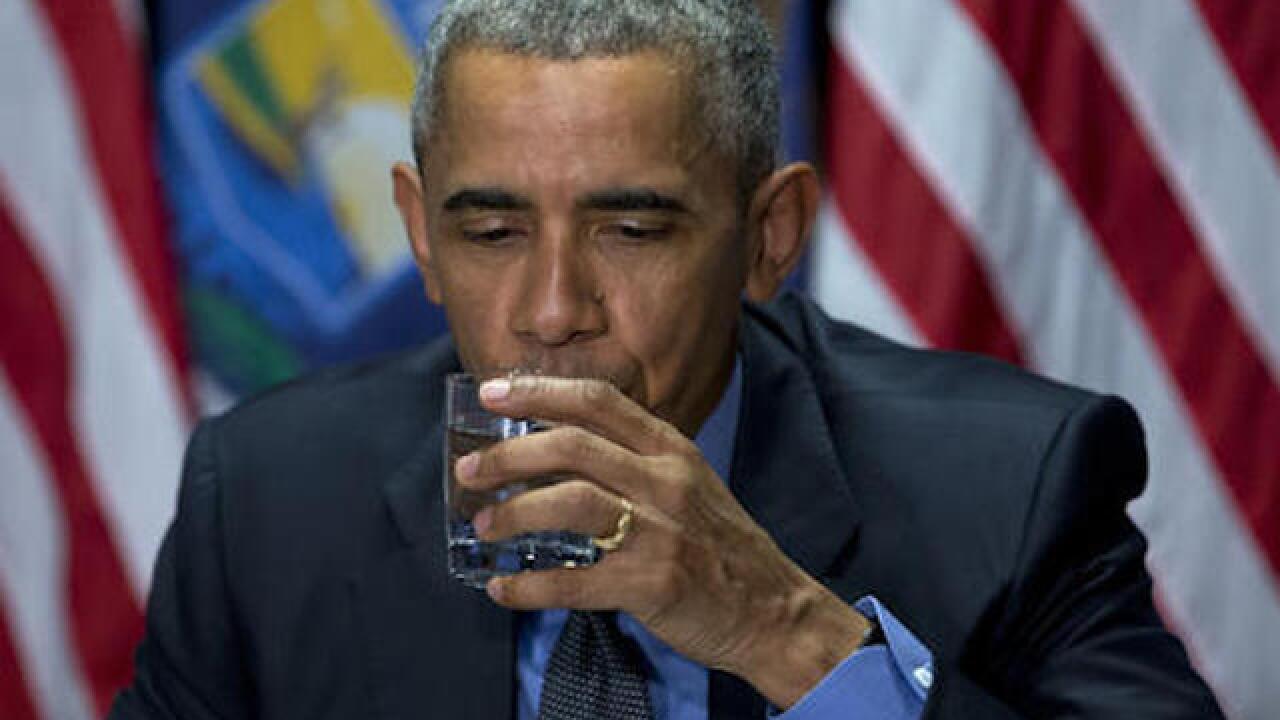 Copyright Associated Press
&lt;p&gt;President Barack Obama drinks filtered Flint, Mich. water during a briefing on the response and recovery plans of the ongoing water crisis by the unified command group at the Food Bank of Eastern Michigan in Flint, Mich., Wednesday, May 4, 2016. (AP Photo/Carolyn Kaster)&lt;/p&gt;

After officials briefed Obama on the federal government's response to the contamination and he addressed the news media, a reporter asked if he would drink the water in a glass on the table. The president said he usually avoids publicity stunts. But he took a drink, saying he wanted to show the water must be safe if he's drinking it.

"This used a filter," Obama said of the water. "The water around this table was Flint water and it just confirms what we know scientifically, which is, if you're using a filter, if you're installing it, then Flint water at this point is drinkable."

Obama declared a state of emergency in Flint in mid-January and ordered federal aid to supplement the state and local response. At that point, however, the crisis was in full bloom.

It took several months for the nation to focus on the beaten-down city's plight, raising questions about how race and poverty influenced decisions that led to the tainted water supply and the beleaguered response once problems surfaced. More than 40 percent of Flint residents live in poverty and more than half are black.

Obama, making his first visit to the city since the crisis began, said the discussion during the briefing underscored that local, state and federal officials must ensure that residents are healthy and have safe water to drink. He said he didn't go to Flint to discuss issues of accountability.

"There are times for politics and there are times for turf battles. This is not one of those times," Obama said. "All of us are going to have to really keep our eye on the ball, even when the cameras go away."

He said the water crisis stemmed from a broader issues, the hard times and neglect that had gripped Flint long ago. He said the focus now must be on rebuilding and moving the city "in a better direction."

Obama also urged residents to use the water filters that are being provided free of charge, and for parents to have their children examined for lead in their bloodstreams. He also pressed people to let the taps run for five minutes every day to flush out any contaminants.

In an effort to save money, the city, while under state management, began drawing its water from the Flint River in April 2014. Despite complaints from residents about the smell and taste and health problems, city leaders insisted the water was safe. However, doctors reported last September that the blood of children contained high levels of lead.

The source of the city's water was subsequently switched back to Detroit, but the lead problem still is not fully solved, and people are drinking filtered or bottled water.

The political and legal fallout is ongoing. An independent commission appointed by Republican Gov. Rick Snyder determined the state was primarily responsible for the water contamination in Flint, and he issued an apology. The Obama administration's response, through the Environmental Protection Agency, has also come under criticism from Snyder and some in Congress who say the EPA didn't move with necessary urgency upon hearing of problems.

EPA Administrator Gina McCarthy told Congress that, while staff repeatedly urged the state to address the lack of corrosion controls, "we missed the opportunity late last summer to quickly get EPA's concerns on the public's radar screen." An inspector general is investigating the EPA's response.

After visiting with federal health officials, Obama met with nine Flint residents at Northwestern High School. A water faucet outside the room warned students not to drink the water until further notice.

Snyder spoke and was booed loudly as he was introduced in the gymnasium where Obama was delivering remarks after his meeting. Snyder said he understood why they were angry and frustrated and said he wanted to say he was sorry.

"You didn't create this problem," Snyder said. "Government failed you."

Many in the audience yelled back, "You failed."

Outside the school, Reneta Richard, a teacher and Flint resident, said she hopes Obama's trip has some impact on her hometown. She recently bought a house and said she's there for the long haul.

"I want him to leave a check — right here, right now — for pipe removal and medical bills and the life we're going to suffer," said Richard, 37, a single mom. "This isn't going to be over in 10 years."

She spoke a block from where dozens of protesters had gathered and were chanting "Flint lives matter" and "They think it's a game, they think it's a joke," a reference to their disgust for Snyder and other state officials over the scandal.

Congress is also grappling with how to help Flint, but progress has been slow. A Senate committee last week approved a $220 million aid package as part of a broader bill that would authorize nearly $4.8 billion for water-related projects around the country. The bill could come up for a Senate vote in May.