When Marcos Cruz heard about the need for truck drivers to help hurricane victims in Puerto Rico he knew he could help. The single dad of two teenagers was born in Puerto Rico but has lived in Las Vegas for over 40 years.

Cruz has a commercial drivers license and experience driving tanker trucks. He's employed by LV Paving who gave him time off for his humanitarian mission. But to pay for the trip, Cruz had to sell his Harley Davidson motorcycle.

When he arrived in San Juan, he got to meet the mayor, Carmen Yulin Cruz, who even sent out a tweet thanking him.

I met this Teamster this morning. He sold his Harley to come work here in San Juan. We will thank you forever. @SJUCiudadPatriapic.twitter.com/QOJ3Lx2Ywc

Mayor Cruz's tweet was retweeted over 4,400 times and some replies even called for Harley Davidson to reward Marcos Cruz for his generosity. 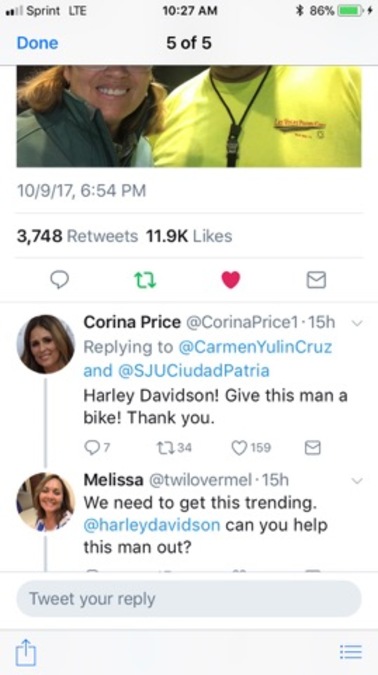 Cruz has two children who are students at Arbor View High School. He says family here is taking care of them while he's gone.