India has the most people without clean water, report says 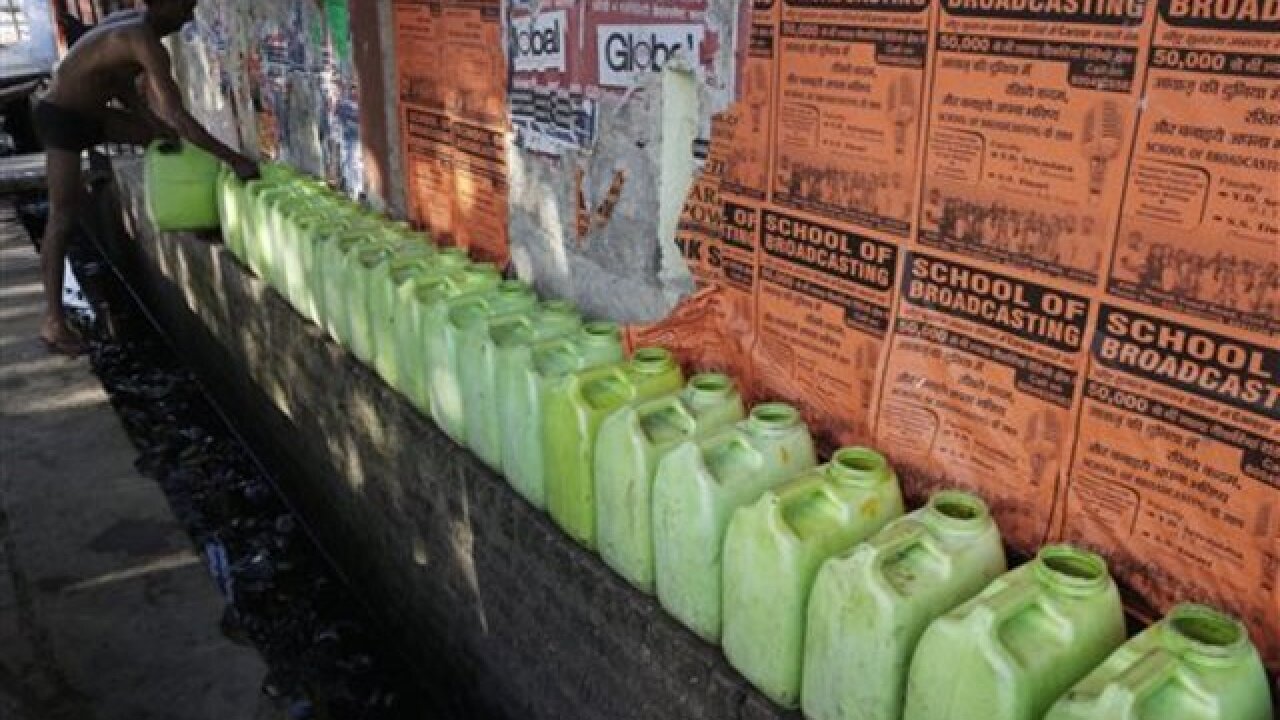 &lt;p&gt;Cans filled with drinking water are displayed for sale on a street in Allahabad, India, Tuesday, March 22, 2016. India has the world's highest number of people without access to clean water � imposing a major financial burden for some of the country's poorest people, according to a report released Tuesday. (AP Photo/Rajesh Kumar Singh)&lt;/p&gt;

By: Associated Press
Posted at 2:00 AM, Mar 22, 2016
NEW DELHI (AP) — India has the world's highest number of people without access to clean water — imposing a major financial burden for some of the country's poorest people, according to a report released Tuesday.
The international charity Water Aid says 75.8 million Indians — or 5 percent of the country's 1.25 billion population — are forced to either buy water at high rates or use supplies that are contaminated with sewage or chemicals. That accounts for more than a tenth of the 650 million people worldwide without clean water access — more than any single country in Africa or China, where 63 million have no access.
The situation worldwide has improved since 1990, with 2.6 billion people gaining access to clean water since then. But the report urged more action in "a world where one in 10 people are trapped in a cycle of poverty and disease for want of a safe, affordable water supply of their own."
Poor Indians without water access are forced to spend an average of about 72 cents to buy 50 liters (13 gallons) of water a day, the amount recommended by the World Health Organization, according to the report. That's nearly 20 percent of their typical daily income, according to the report. By comparison, people in Britain spend about 10 cents a day for 50 liters.
"Poor management of water resources is the biggest problem holding India back," the report said. "Misappropriation in planning and execution of water supply projects is another key factor. And projects often use inadequate sources, or pipelines do not reach habitations."
The alternative to buying supplies — using dirty water — comes with sober consequence, sickening countless people every year. About 315,000 children die from diarrheal diseases each year, with 140,000 those deaths happening in India.
India already faces chronic water shortages and drought, as rivers become increasingly polluted and groundwater reserves rapidly decline thanks to the unchecked use of water pumps by farmers and villagers. The problem is set to worsen as global temperatures rise and rain becomes more erratic with climate change.
Within 15 years, the country is expected to have only half the water it needs to meet competing demands from cities, agriculture and industry.
Some Indian cities, including New Delhi and elsewhere in the northern state of Rajasthan, are rolling out water kiosks in drought-prone areas. Others, including Nagpur, in the central state of Maharashtra, are experimenting with privatization schemes to try to improve service. The breadbasket state of Punjab, which produces the vast majority of India's grains, has set up public water filtration units to clean groundwater contaminated by sewage and agricultural chemicals, including pesticides and fertilizers.
"We don't handle public goods well," said environmental economist Pavan Sukhdev. "You need public management systems to manage public goods, and there are no market lessons to help guide that management."
Experts worry the water crisis could exacerbate community conflicts or regional tensions, and have urged authorities to impose strict regulations on water pumping and water use.
India's Supreme Court "has already held that the fundamental right to clean water is a right to life," said court advocate Satya Tripathi, adding that it's only a matter of time before the issue comes back before the court. "The government really has to pay attention. Water is the one thing that can tear this country apart."
While India has the most people lacking clean water access, the much smaller countries of Papua New Guinea, Equatorial Guinea, Angola, Chad and Mozambique topped the list of countries with the highest population percentages lacking clean water. And in Papua New Guinea, the 4.5 million without access — or 60 percent of the Southwest Pacific island country's population — spend more than 50 percent of their typical income on average on water each day, according to the report.
Rising seas and more frequent extreme weather events — both consequences of ongoing climate change — "will make water supplies, and life in general, ever more fragile," it said.
Copyright 2016 The Associated Press. All rights reserved. This material may not be published, broadcast, rewritten or redistributed.